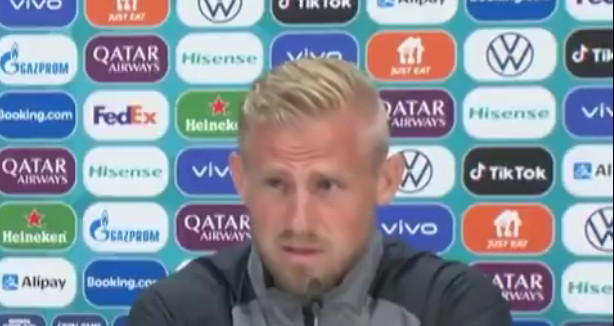 Anyone who’s followed international soccer in the last few decades has heard of the “It’s coming home” discussion around the English national team. That discussion particularly took off following the “Three Lions (Football’s Coming Home)” song from comedians David Baddiel and Frank Skinner and Liverpool-based indie band the Lightning Seeds, which was released ahead of Euro 1996 (hosted in England). And it’s continued with countless references to various international titles “coming home” since then. But, ahead of the England-Denmark Euro 2020 semifinal Wednesday, Danish keeper Kasper Schmeichel had quite the response Tuesday to a question that ended with “Particularly the phrase ‘It’s coming home,’ what would it mean to you guys to stop it from coming home tomorrow night?”

Kasper Schmeichel was asked what it would mean to stop football from 'coming home' … ? pic.twitter.com/0AAwNr8J0L

“Has it ever been home? I don’t know, have you ever won it?” The reporter responds with “Yes, 1966, it was home,” and Schmeichel responds “Was that not the World Cup?” And the reporter says “Yes, exactly, but I’m saying this whole tournament coming home, finally the success this country craves.”

Schmeichel (who does currently play for English club side Leicester City) is completely correct there. The current Euro tournament (properly the UEFA European Championship) only began in 1960, and England has never won it. Their sole major international tournament title is the aforementioned 1966 World Cup. So there’s nothing to talk about with a Euro title “coming home,” at least from a past results perspective.

Of course, “coming home” carries more than that. It was always somewhat of an arrogant and exaggerated claim about England’s role in world soccer. While some of the rules of the modern game can be attributed to English schools, soccer’s early history is much wider and broader, and the English national team’s performances (which include just one major international title win, the 1966 World Cup) certainly don’t back up a claim that England is the true home of soccer.

In fact, there’s more of a claim that the Euro title might be “coming home” to Denmark, as the Danes won that tournament in 1992 (they have not won a World Cup, but that’s a different competition, and they do have three Olympic silvers to their credit from 1908, 1912, and 196). So good for Schmeichel for pushing back on this question, and questioning exactly what’s meant by the oft-repeated English talk of a title “coming home.” In the case of the Euro title, it’s absolutely not “coming home” if England wins it; it’s going to a new winner.