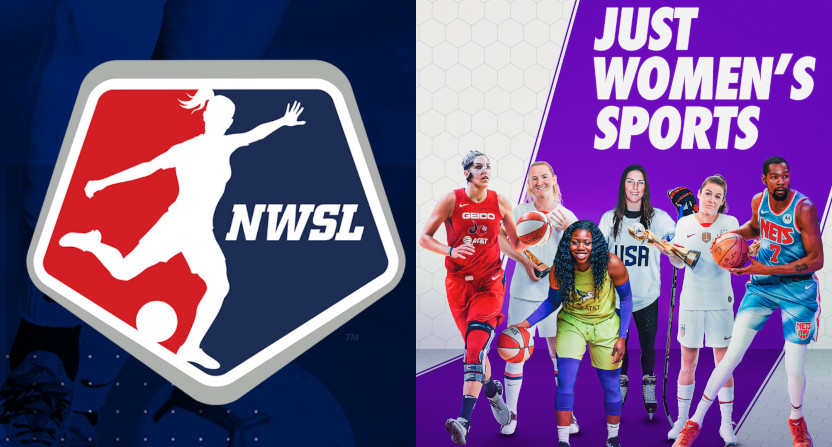 The last year-plus has seen rapid growth for Just Women’s Sports, a multimedia company covering women’s sports through online articles, podcasts, videos, a newsletter, and exclusive merchandise and live events. The company was founded in 2020 and received $3.5 million in funding from some big names in May 2021, with that fundraising round led by Will Ventures, including Kevin Durant and Thirty Five Ventures, and also including many women’s sports stars such as Elena Della Donne, Arike Ogunbowale, Hilary Knight, Kelley O’Hara, and Sam Mewis (as seen in the graphic at right above).

Last week, Just Women’s Sports announced $6 million in a new round of funding. That round was led by Brooklyn Nets and New York Liberty owner Joe Tsai’s family office of Blue Pool Capital, and it also featured famed athlete and trailblazer Billie Jean King, Washington Spirit owner Michele Kang, Bolt Capital (the family office of David Blitzer, who owns shares of a lot of sports teams), and many more. Now, they’ve announced a new media partnership with the National Women’s Soccer League, covering everything from highlights rights to events around the league’s championship. Here’s more from a release:

Core to the new deal, Just Women’s Sports (JWS) has acquired the rights to distribute NWSL highlights from both the current and past seasons – bringing the top moments from the popular
league to a growing, passionate fan community across multiple platforms, while helping to drive tune-in to NWSL broadcasts.

“The NWSL continues to generate some of the most exciting soccer in the world, and we are thrilled to be providing a platform that will bring fans access to the league’s biggest moments,”
said JWS Founder and CEO Haley Rosen. “Highlights are the cornerstone of digital sports media. They are the easiest way for current fans to engage with their favorite athletes and for
prospective fans to discover what all the hype is about.”

“This is an exciting opportunity to partner with a digital-first media brand dedicated to growing the audience for women’s soccer,” said NWSL Commissioner Jessica Berman. “Just Women’s
Sports understands the space, and we believe this is just the beginning of what will be an important and long-lasting relationship between JWS and the NWSL.”

It’s interesting to see a media deal focused around highlights rather than live matches, but there’s maybe some logic to that in this case. The NWSL already has existing media deals with CBS and Amazon (for Twitch), with those deals running through this year. And Just Women’s Sports isn’t really a live match distribution platform, but there are some value cases for them in adding highlights to their content, whether as standalone packages on their website or with integration into their video shows. We’ve seen a number of distribution deals centering on highlights, especially with social media services like Twitter, so this adds to that list.

It’s also notable to see this include on-site activations around the NWSL Championship, including both the pre-game show and the VIP party. Parties around big sports events are proving to be a growing thing for sports media brands (particularly Bleacher Report) and even individual athletes and analysts, and it makes sense for Just Women’s Sports to get into that, especially considering that they have a lot of prominent active athlete contributors people might be interested in meeting. And it’s interesting to see a multi-component media deal covering highlights, pre-game coverage, and an event party in combination with the league. This fits with some of the new steps the NWSL is taking under Berman, though, and it fits with Just Women’s Sports, founded by former Stanford and professional soccer player Rosen and backed by current NWSL players O’Hara (who hosts the site’s “Players’ Pod“) and Mewis (who co-hosts the site’s “Snacks” podcast with Lynn Williams) among others. We’ll see how this deal works for both sides.

[NWSL logo from SportsLogos.net, Just Women’s Sports image from their May 2021 Twitter announcement of funding]