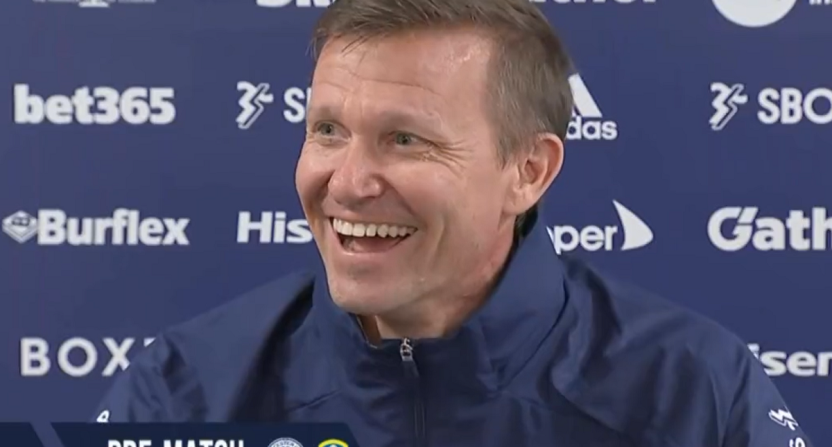 Jesse Marsch taking over at Leeds United is a huge moment for Americans in European football.

On the playing side, American men have been making inroads for decades now, work that has allowed the current younger generation of talent to catch the attention of scouts and clubs much earlier in their careers, making moves to develop at the highest levels of the sport from a younger age. On the management and coaching side, though, things are still less smooth.

Marsch is only the second American manager to take charge of a Premier League club; former USMNT manager Bob Bradley had a brief run at Swansea City in 2015 before being fired. (David Wagner considers himself German, though he was a former USMNT player who managed Huddersfield Town.) The stigma is such that Marsch is stepping into a situation where in an opening press conference he gets asked questions about that stigma.

In response, Marsch confirmed there’s still a stigma there, citing Ted Lasso as being somewhat unhelpful on that front. Ironically, though, Marsch’s full response ended up mirroring much of the show’s ethos:

? SOUND UP. In his first press conference as @LUFC manager, Jesse Marsch addressed the possibility of a stigma around American managers, and if Ted Lasso has exacerbated it ???? pic.twitter.com/F209Oab6xq

After mentioning that he hasn’t seen the show, Marsch dove into his own philosophy on coaching, which is heavy on personal growth and development and being open to new ideas while instilling a sense of belief in his team:

“It was the reason I tried to adapt to new cultures. This is the fifth country I’ve coached football in. It takes me out of my comfort zone every time. It challenges me to grow and develop and learn new things. I’m very open to that. I’m very cognizant of the fact that I’m not perfect and I don’t want to be.

And all I can say is the only way I know how to do things is to go all-in, to give everything I have, to believe in who I am, to believe in the people I work with, and to try to maximize what we are every day. And I find if you can do that effectively that you can be incredibly surprised with the human spirit and what it can achieve.

That sounds like Ted Lasso, I think, from what I’ve heard.”

Indeed it does! As soon as he started mentioning believing it was clear that there was going to be some kind of parallel, and it only grew stronger from there. It sounds like Marsch would probably really enjoy Ted Lasso, to be honest.

It also sounds like the folks at the show are certainly interested in his chance at Leeds as well:

Jesse Marsch may not watch #TedLasso, but we at Ted Lasso are definitely watching him. And rootin’ for ‘im. https://t.co/xyLnGKRYDq

Marsch begins his tough task of keeping Leeds up this weekend; his first match in charge is Saturday against Leicester.