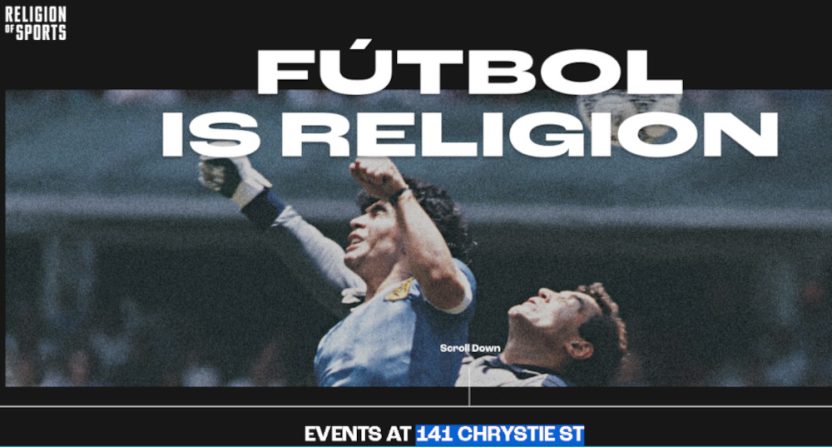 An interesting thing we’ve seen a fair bit lately is media companies doing physical events around big sports moments. The latest there comes from Religion of Sports, which has a “Fútbol is Religion” campaign going on right now.  That includes a physical “House of Fútbol,” at 141 Chrystie Street in New York City, with events there running through Sunday.

The “Fútbol is Religion” campaign is centered around the ongoing 2022 FIFA World Cup. It features a wide list of free events, including everything from panels with Religion of Sports documentarians and figures to live podcast recordings to pick-up soccer games and watch parties. Religion of Sports co-founder Gotham Chopra spoke to AA on this by email, and said their main goal with this was to provide a place for fans to get together:

“There’s no more impactful sport on the planet than football/soccer. It is the most popular sport by a million miles (sorry [ROS co-founders] Tom/Michael!) and means more to people in so many nations than most things in their lives. The World Cup is not just the biggest sporting competition in the world, it’s a celebration of all of the above and for that reason alone, Religion of Sports is almost obligated to hold an event that commemorates Football. We wanted to create an event—really a gathering place—to be able to connect the football community and literally commune with one another during the tournament.”

There’s a wide listing of events here, across a lot of categories. Chopra said there were some hurdles in trying to set that up, but their NYC-based team was key to making this work.

“Well, it’s definitely been a logistical endeavor, but we’ve had a great NYC-based team managing it. At the company, we often look at the calendar and identify big sporting moments and brainstorm what we could and should be doing. Obviously the World Cup qualifies as the biggest event, so there was an added energy to figure something out. As far as hurdles go, beyond the obvious ones of finding a physical space that’s available and can accommodate the types of things we wanted to do, it’s always about now getting people there. New Yorkers in particular are a busy bunch, but hopefully the lure of the space, the activities we’ve planned, and most of all, the game, will get people to show!”

We’ve seen some media companies make some efforts along these lines before, especially with Bleacher Report’s NBA All Star, NHL Stadium Series, and Super Bowl events and Just Women’s Sports NWSL activations. The Religion of Sports endeavor here is perhaps particularly unusual, though, considering that their company is not (at the moment) a game broadcaster. And a whole lot of the events here are not centered on ROS content. Chopra said the idea here was celebrating soccer and sports in general, and raising some awareness of what ROS does along the way.  And he said with this being their first event of this type, they have the ability to try things and see what works.

“This is the first time we are doing this—or anything like it—so I think more than anything we just wanted to experiment with various activities and ideas and see what works. I’d say the big theme and tone for the House of Fútbol is celebration. We want to celebrate the game, the fans, and the storytellers for whom soccer—and sports in general—is a language through which we can chronicle the world. And of course, we want people to have fun! Sport is about play so there better be an opportunity to kick the ball around, or what’s the point?”

There will still be lots of opportunities to discuss Religion of Sports content, though, and also wider sports issues. The lineup includes panels on innovation in sports storytelling, the rise of the sports documentary, and female power players in sport. Chopra said all of those areas matter to the company.

“All of the above is who we are. We love sports, but ultimately we like to tell stories that transcend sports. That appeal to audiences that aren’t just fans, or may have very passive interest in sports and/or the scores and statistics that surround them. I think ever panel that we’re staging is an opportunity for us to share some of what we are seeing and experiencing in the industry right now, but also to listen and learn from others. It’s a rapidly evolving (and consolidating) industry right now for better or worse, and I think the way we forge through it is together.”

It’s notable that for an event during the men’s World Cup, Religion of Sports is also spotlighting the upcoming 2023 FIFA Women’s World Cup. They’ll have a live podcast recording with Carli Lloyd and that aforementioned discussion on female power players in sport. Chopra said women’s soccer is a key focus for them, and the USWNT is a vital part of the U.S. soccer landscape.

“The Women’s World Cup is as big of an event (on the horizon). And if we are being honest, the women’s team is more dominant than their male counterparts! I don’t really look at our inclusion of women’s soccer, athletes or specially Carli Lloyd as some form of activism. We’re in the business of GOATs and these teams and athletes embody that. How could we not include them?!”

Chopra said he’s hopeful these events will be embraced by the NYC sports community.

“Come out and be a part of it. We’re excited to explore, share, and learn together!”

More on “Fútbol is Religion” and the “House of Fútbol” can be found on Religion of Sports’ site.