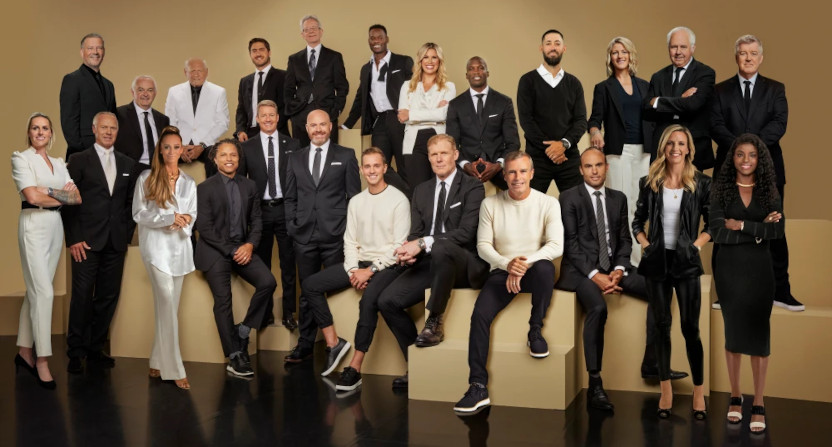 The full list of Fox’s commentators for their coverage of the 2022 FIFA World Cup (which begins in Qatar Nov. 20) is now out, and there are some notable changes from the last time they did a men’s World Cup in 2018. (They also broadcast the women’s FIFA World Cup in 2019, but while some of the figures here also worked that tournament, there’s more crossover to their roster from the last men’s World Cup.)  One of the biggest is that that unlike last time, where four of the six announcing teams called games from stateside studios, every announcer, reporter, and analyst covering this World Cup will be in-country in Qatar.

Beyond that, while some of the biggest new names (Ian Darke, Jacqui Oatley, Chad Johnson and Maurice Edu, and Mark Clattenburg) were already known, there are still some notable further names and pairings. Here’s that full list, via Seth Vertelney at USA Today‘s Pro Soccer Wire:

On the match commentator front, Strong and Holden were the lead pairing in 2018, and they’ve called plenty of other national team and MLS matches together for Fox (more than 250 since 2014), so there’s a good history of working together there. Dellacamera is a long-time veteran of Fox’s soccer coverage, but Jones is a relatively new partner for him; in 2018, Dellacamera called matches with Tony Meola, who isn’t on the roster this time (so there will be no discussion of how much he sounds like Troy Aikman), while Jones worked with Glenn Davis. However, Dellacamera and Jones worked together during Fox’s Copa America and Gold Cup coverage last year.

Rae and Wagner worked together in 2018, while the Darke-Donovan pairing is a new one for Fox, but both have a long soccer history (including Darke famously calling Donovan’s 2010 World Cup goal against Algeria). Barton was on the 2018 lineup as well, working with Mark Followill, while Oatley is new to Fox coverage, but has plenty of past World Cup experience with the BBC and ITV. Here’s what Fox’s David Neal said about this lineup in a release:

“We couldn’t be more excited with the talented team of announcers, reporters and analysts we’ve assembled for FOX Sports’ highly anticipated presentation,” said Neal. “Our goal was to build a well-rounded group who could collectively connect with viewers and cover the tournament at its highest level. The USMNT’s exciting return to the competition also gave us the opportunity to bring together some of the biggest household names to ever represent the U.S. on the world stage. With just under 50 days to go to the opening match, we look forward to bringing our preeminent roster of soccer commentators and experts to Qatar as they prepare to call every thrilling match and cover every amazing storyline.”

Vertelney got some interesting quotes from Stone and Lalas on some of their coworkers, too:

“It’s a pretty neat pairing with all the history [Donovan and Darke] have together,” lead host Rob Stone told Pro Soccer Wire. “It’s always great to have two legends working with you. Ian has been doing this for a long, long time and is just one of the classiest voices in the game. And I think Landon right now still goes down at least in my book as the greatest U.S. men’s player ever, and to have somebody of that caliber and the things he’s witnessed and done on this stage as part of our team only makes us stronger.”

We’ll see how this lineup works out for Fox. The tournament will begin with Qatar-Ecuador at 11 a.m. Eastern on Nov. 20.

Updated with info on Dellacamera and Jones’ work together last summer.