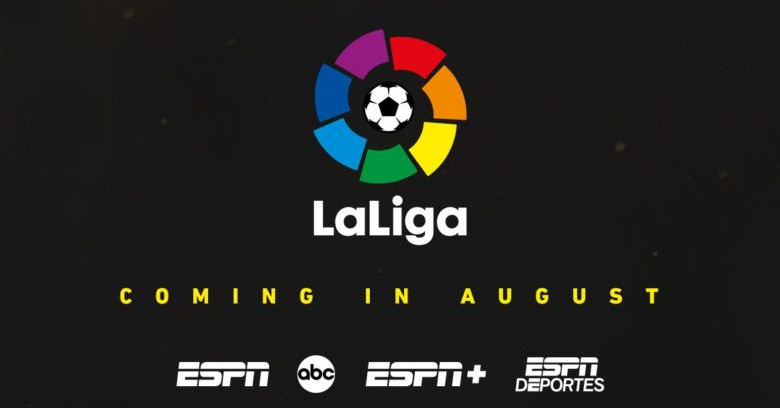 The last few months have been busy on the rights acquisition front for ESPN, including deals with MLB, the NFL, and the NHL. Now, they’ve added top Spanish soccer league LaLiga. This new eight-year deal will begin in August and will include both English and Spanish rights. Most games will air on ESPN+, but some will air on linear ESPN networks and ABC. Here’s more on that from an ESPN release:

ESPN and LaLiga have reached an expansive, long-term agreement that will make ESPN+ the new English- and Spanish-language home for LaLiga Santander and LaLiga SmartBank in the United States for the next eight seasons (through 2028-29). Beginning in August, hundreds of live matches across both leagues will be available each year, exclusively on ESPN+. ESPN is already the home of Spanish Copa del Rey, Copa de la Reina and Supercopa de España.

LaLiga Santander, the top division in Spanish soccer, is one of the world’s marquee sports leagues, featuring 20 clubs, including perennial global powers FC Barcelona, Real Madrid, Atletico Madrid, Sevilla FC, and more. ESPN+ will stream live and on-demand replay coverage of all 380 LaLiga Santander matches per season. In addition, ESPN+ will livestream a selection of LaLiga SmartBank matches each round all season long, including five postseason promotion play-offs. All matches will be available to fans in both English and Spanish.

Select matches will air across ESPN networks each season, with coverage and highlights also available on SportsCenter and other ESPN studio programs, as well as on ESPN digital and social platforms.

As per Anthony Crupi of Sportico, this comes with ESPN paying around $175 million a year, or $1.4 billion overall. That becomes the richest U.S. TV deal for an overseas soccer league for the moment, but it may soon be surpassed by the English Premier League. NBC’s deal with that league began in 2013 and was extended through spring 2022 in 2015, with that extension coming in at $1 billion for six years ($167 million per year). With NBC, ESPN and CBS all reportedly chasing Premier League rights, and with all of those companies now having over-the-top subscription services to fill out with content (in addition to their linear TV operations), it seems likely whatever deals are signed there may wind up being for even more than this La Liga one.

Interestingly enough, this deal also comes despite LaLiga’s previous U.S. deal with beIN Sports running through 2024. This was done by LaLiga buying back their rights from beIN, then selling them to ESPN. Low carriage and viewerrship numbers for beIN were reportedly a factor in LaLiga making that change. Here’s more on that from Crupi.

Disney execs had been in discussions with LaLiga for quite some time, despite the fact that the league’s current contract with Qatar-based beIN Sports wasn’t due to expire until 2024. Having struggled to find its footing in the U.S. pay-TV ecosystem—per Nielsen cable coverage estimates, the channel and its Spanish-language sibling now reach fewer than 15 million traditional wireline/satellite/telco subscribers each, which is well shy of ESPN’s 83.5 million—beIN wasn’t an ideal vehicle by which to boost LaLiga’s stateside profile.

In the first quarter of 2021, BeIN Sports averaged 4,000 viewers per day, making it the second least-watched network on American TV, ranking just ahead of something called the Comedy Channel. BeIN Sports Español in the same period averaged 12,000 viewers.

The U.S. is only part of the global picture for Qatar-based beIN, but even with that, they’re not giving up on the U.S. market just yet. While their main remaining rights in the U.S. at the moment are France’s Ligue 1 and away U.S. men’s national team World Cup qualifiers, they do have some rights to less-prominent leagues and cup competitions. beIN executives told Christopher Harris of World Soccer Talk selling the LaLiga rights back made sense for them, and they plan to keep running their U.S. channel even without those rights:

“This is just a very rational decision,” explained beIN SPORTS’ deputy managing director for the U.S. and Canada Antonio Briceño. “It’s based on ensuring the sustainability of our presence in this market. Sometimes in business, you have to make tough decisions, and this was a difficult one. We’ve been with [LaLiga] since the beginning of this channel [in 2012], but times have changed, and we need to adapt to make sure the business stays, and that it’s not just attached to one or other rights. We’re a sports channel and we will continue to deliver a product for the fans out there with the properties that will remain that we believe are very strong.

“From my financial perspective, it was an offer that made my business P&L (profit and loss statement) look good, but it goes beyond the financials. There are many different factors that [resulted] in that decision. And yes, it was a tough decision. We believe that beIN SPORTS has been instrumental in growing the brand of LaLiga in the U.S. Actually, the fact that [LaLiga] are willing to buy back the rights from us is also due to the work we’ve done for them.”

…“We are absolutely here to stay,” Briceño said. “I was one of the first ones [in 2012] that fought very hard to include those [LaLiga] rights in our portfolio. I believe we’re doing the same kind of work [for other leagues and competitions] that we did with LaLiga.

“Before beIN SPORTS, those rights were not given the proper treatment they deserved. And now with us, we’re making the brand of Copa Libertadores and Copa Sudamericana grow. I think with Ligue 1, it’s been an extremely good property for us. We’re serving a niche of the population, that is a fact. And I think we will continue to super serve that niche in a very meaningful way. And we believe that [TV providers] will see this in the same way.”

At any rate, it’s certainly notable to see ESPN picking up LaLiga rights, and doing so for a long period of time, and doing so with a deal mostly focused on ESPN+. And that should further solidify ESPN+ for those particularly interested in world soccer; they have quite a lot of rights in there, including Spain’s Copa Del Rey, the German Bundesliga, MLS, England’s FA Cup, EFL and Carabao Cup, Dutch Eredivisie, Scottish Premiership, UEFA national teams, USL, and more, and they offer more than 2,900 matches per season across all of those groupings. Interestingly enough, they did lose Italy’s Serie A to CBS/Paramount+ earlier this year. So the investment to pick up LaLiga is notable, and it suggests that ESPN+ is definitely going to keep its soccer focus even after the end of their Serie A deal.