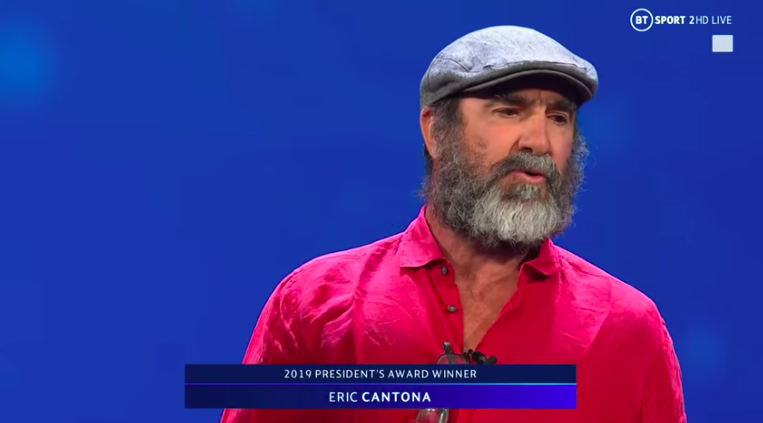 The 2019-2020 Champions League draw took place on Thursday in Monaco. The draw brings a lot of excitement for soccer fans around the globe as the best European teams are placed into groups for the annual club competition. But like the Super Bowl pregame show or the NBA Draft Lottery, it’s an incredibly drawn-out process featuring numerous segments, awards, and special guests in addition to the actual draw.

Former Manchester United legend Eric Cantona was one of the honorees, receiving the UEFA President’s Award for his commitment to charitable causes, specifically the Common Goal initiative. The French striker was most noteworthy in his playing days at Leeds United and Manchester United for his tenacity in front of goal and his tenacity in delivering karate kicks to fans.

Upon receiving the award in Monaco, Cantona unleashed one of the most bizarre acceptance speeches ever heard in the history of sport. He began by quoting Shakespeare, then gave a proclamation about advances in technology making human beings eternal before dourly lifting up the inevitability of war and crime. This was done at a draw for a soccer tournament.

Imagine watching Archie Manning delivering an Ultimate Warrior promo at the Heisman Trophy ceremony. That’s what this moment was like.

Here’s the transcript of the incredible speech via the BBC:

“As flies to wanton boys we are for the gods, they kill us for their sport.

“I love football. Thank you.”

In short: science has the power to make us immortal beings but our quest for power and greed will ultimately be what dooms humanity. Also, soccer is great.

No wonder some of the world’s best players and those in attendance had reactions of spellbinding disbelief.

Now you know what American sports award shows are truly missing to actually make them must-see TV. But really, all the world wants now is for Eric Cantona to start his own podcast. Between lines like this and his 1995 line about the seagulls and the trawler, you know it will be memorable.