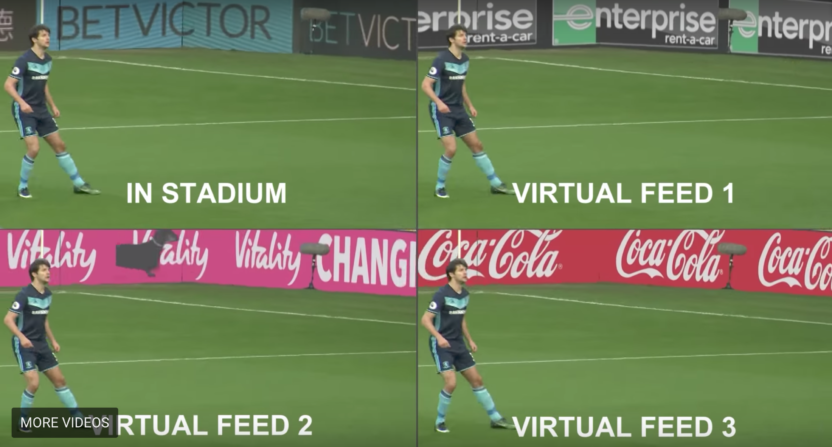 Last week, we saw the downside of ads superimposed on television during sporting events, when Masterpass chopped off George Springer’s head during the World Series.

But virtual decapitation or not, this kind of technology is coming to sports full-bore. According to SportTechie, teams in the English Premier League and English Football League have installed “virtual replacement perimeter technology,” which will allow broadcasters to alter in-stadium ads on television. And this can allow for different ads on different broadcast feeds.

The potential here is pretty dramatic. With this technology, stadium ads can be tailored specifically to certain audiences. The in-stadium crowd can be pitched on products local to them, while TV viewers in different places get their own set of ads. Advertisers are always seeking to target as specific an audience as they can (no need to sell lawnmowers to people in New York City), and these virtual ads allow them to tailor their reach. A broadcast in the U.S. could feature different ads from a broadcast in the U.K. People watching on TV could see different ads than people streaming digitally. Maybe local affiliates in different cities could air specific stadium ads, so your local pawn shop could have its logo on the Super Bowl broadcast. The possibilities are endless.

On the other hand, you could argue that viewers lose something when the production doesn’t look authentic. There is a certain charm in seeing the local ads on TV to remind you where the game is played. And, as we learned during the World Series, there are some technical risks to imposing ads on the screen.

In the end, the potential for revenue here is undeniable. If this technology works well in English soccer, there’s no reason not to expect it’ll wind up in major American sports more regularly. We’ve seen in during events like the World Series and the World Cup of Hockey, but it may become more and more widespread. Before long, many of the ads you see on television might not actually be there.