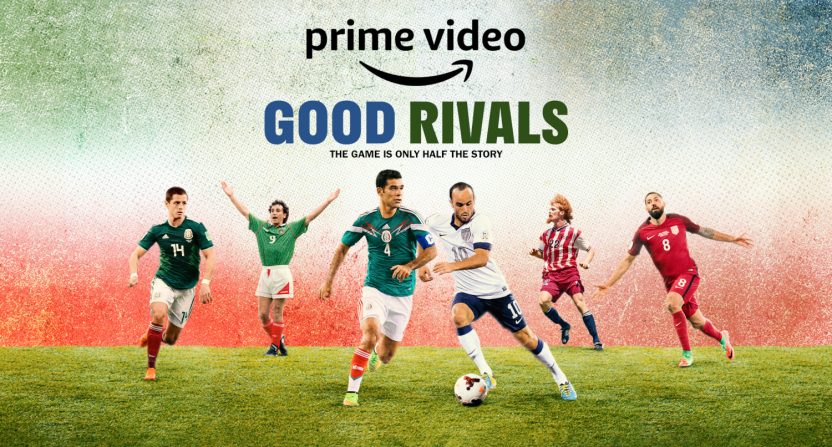 The Good Rivals three-part docuseries on the soccer rivalry between the U.S. and Mexico is now streaming on Amazon’s Prime Video. The series looks at the evolution of that rivalry, with the first episode covering Mexico’s initial dominance but also how the tide started to shift in the 1990s, the second focusing on the 2002-2016 era of the rivalry, and the third looking at developments since then. It focuses heavily on Landon Donovan and Rafa Márquez, tracing the evolution of the rivalry through them. Director Gabriel Serra spoke to AA last week ahead of the series premiere, and he said the project was initially appealing to him because of how it connected personal stories of Donovan and Márquez to stories of their countries’ soccer teams to stories of those countries overall.

“It interested me because I’m from the generation where I grew up with Landon and Rafa Marquez as stars. And for me also, I used to play soccer a lot, so I know very well this intense and uncomfortable rivalry that the U.S. and Mexico had because of the sociopolitical times and relationships. For me, it was an incredible idea and project to really talk about the soccer as proxy to the relationship between two good neighbors, good rival countries. All the dramatics and lines and stories were just there to build up a very great story.”

Serra said the focus on Donovan and Márquez was key to making this relatable and personal.

“And for me, it was very important to have the storytelling of the personal life of Rafa and Landon, and to connect their stories with also this rivalry, because they embodied it in a way, this contemporary rivalry. So for me it was very nice and interesting to give to this project a storytelling that was very connected with the stories of Landon and Rafa.”

He said the crossovers and contrasts between Donovan and Márquez were interesting.

“On one hand, you have Rafa Márquez, who’s a Mexican soccer player and better, for me, in different ways than [previous star] Hugo Sánchez, who was a very important star for Mexico. You have this guy who’s a defender, who’s had a very successful life since he was a kid, but a very hard life also. And then on the other hand, you have the story of Landon who was a Mexican-American California-born guy. He grew up with Mexicans, and he had this connection with the Mexican culture since he was a kid. So for me, it’s very beautiful and interesting.”

Serra said the personal interviews he was able to conduct with those two players were key to this story.

“For me, it was very important to connect with Landon and connect with Rafa. I had more time with Landon, I came to LA to film with him, and also we went to film with him at the border. I wanted to have him walk around the border and to hear his thoughts on the culture, on this idea of a border. They’re different in a way, they have this contrast, but they also have this passion and leadership that these rivals need.”

And he said he was able to form connections with them that translated to the screen.

“I’m very young in a way, I’m 30 years old, so I was enjoying it a lot and being very straight and charming with them, because the most important thing when you have a project like this is the people. The more personal that the project is, the more that people will connect. So for me, it was very important to connect with Landon, to connect with Rafa, and to really build up something that puts this rivalry in a human relationship but also in a rival relationship between countries that are neighbors.”

He said it was also important that Márquez and Donovan started to emerge as national stars around the time the U.S.-Mexico rivalry began to shift.

“And the beginning of their generation with DaMarcus Beasley, Landon Donovan, many others, it is also the beginning of the historical moment where the U.S. begins beating and being an uncomfortable rival for Mexico. It was after the 1994 World Cup. So it’s very interesting how you have these two characters, these two stories, that in a certain way are different, but also have similar things. And I also think the Americans watching will see things about Donovan that they have never seen, things about his life that they have never seen.”

This was an interesting project for Serra, as he comes at it with a bit of an outsider perspective. He was born in Nicaragua, and while he lives in Mexico now, he didn’t grow up on one particular side of this rivalry. But he said he followed it significantly growing up, and he particularly enjoyed getting to talk to journalists he’d long read.

“When I was doing all the interviews, with Grant Wahl and with a lot of Mexican journalists, I was feeling the difference of how I was getting to them. I was always respectful, but for me, as a soccer player, as a kid also, it is a beautiful thing to be sitting with these guys, who when I was a kid, I was influenced by them.”

While this is a soccer-focused project, it also covers some of the context of the larger relationship between the U.S. and Mexico. Serra said the third episode on where things stand now, and the decisions players from dual backgrounds now have to make on which country to play for, is particularly notable there.

“I think the project also brings us as spectators the new kind of uncomfortable situations that are happening with young kids, Mexican-American kids, that have to decide to play for Mexico or the U.S. This is a consequence of many years of migration between both countries, and these new stories really touch your heart; they’re also very beautiful for the project, and very important to tell.”

Serra said it’s perfect timing for Good Rivals to premiere during the 2022 World Cup, as there’s currently more talk about soccer in general and about these national teams in particular. He said he hopes it shows off the U.S.-Mexico relationship, where it’s been, and where it can go.

“I’m very happy that this project comes out in the context of the World Cup. I think people will be able to see a docuseries where they will connect with specific historical moments, and feelings, and wounds that this rivalry has taken to the contemporary public, and the young public, and maybe people from the 60s and 70s or the 90s. For me, it’s a very nice thing that the audience can connect with the main characters, with Landon and Rafa, but also with soccer, and with the idea that migration has brought to both countries very important things. And in the future, both countries are going to host the World Cup in 2026 with Canada also. So I think soccer is also an approach to have a beautiful relationship with both countries.”