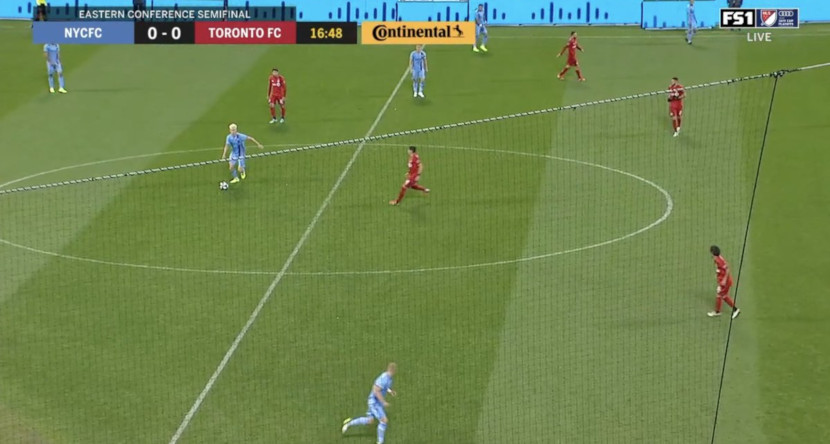 Major League Soccer has to continually fight against the viewpoint that they are not “major league.” In spite of nearly endless expansion from the league, the signings of marquee superstars, and large crowds across the country, it seems that MLS always has to fight and scrap for its spot on the American sporting landscape.

Unfortunately for the domestic soccer league, it’s events like what fans had to witness during the Eastern Conference Semifinal between NYCFC and Toronto FC that will not help the MLS perception battle.

Incredibly, during a playoff game, the main FS1 camera was being blocked by foul ball netting at Citi Field thereby obstructing the view of fans watching at home for the entire match. Keep in mind that this is happening DURING A PLAYOFF GAME. ON NATIONAL TELEVISION. IN THE YEAR OF OUR LORD 2019.

Here’s the visual evidence along with some tweets from exasperated fans:

Not only does this team play on a baseball field, but their backup stadium is a different baseball field… but with the foul ball net up ?

The way the broadcast of the @NYCFC vs @TorontoFC looks with that net is a huge step back for @MLS. Ugh disgusting

A playoff game scheduled to be played in a baseball stadium regularly used by an #MLS team, moved to another baseball stadium because of a scheduling conflict with baseball, and now a large net obstructing the view on the broadcast.

What the hell is this net across my screen, @MLS, @NYCFC & @FS1? #amateurhour pic.twitter.com/lAHaPXnoFe

Also MLS: we couldn't get the stadium to take down the foul ball net for a nationally televised playoff match pic.twitter.com/cghtQwV0AD

I mean, seriously, look at this! Could you imagine any other major league sport doing this for a nationally televised game, during the playoffs, no less? How does this happen without anybody at MLS or Fox stepping in and either trying to take down the nets or find an alternative, unobstructed camera angle?

How did we get to this point? NYCFC plays their home games (still) in Yankee Stadium, which is very much (still) built for baseball and not so much for soccer. However, potential conflicts with postseason baseball forced NYCFC to look for an alternative venue for their playoff game against Toronto. Enter the Big Apple’s other baseball stadium, the Mets home ballpark of Citi Field. But it carried its own foul ball netting issues.

MLS ratings continually lag well behind their Premier League counterparts, and the league has real challenges when it comes to winning over casual fans, let alone soccer fans that may choose to watch the international game. Somehow, you can now add obstructed-view television viewing to the list.