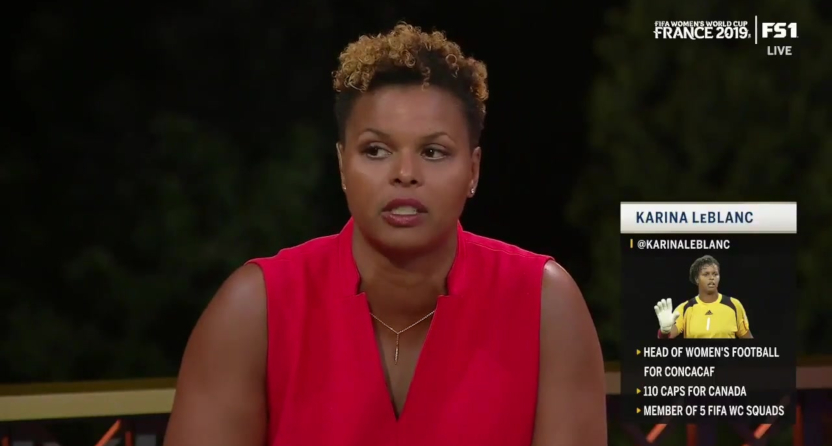 Karina LeBlanc has had quite the career as a soccer goalkeeper (she recorded 110 caps for Canada from 1998-2015, was inducted into the Canada Soccer Hall of Fame earlier this year, and also played in the WUSA, W-League, WPS, and NWSL), an executive (she was named the head of CONCACAF women’s football in 2018), and a commentator (she’s worked for CBC, Sportsnet, TSN and Yahoo Canada in Canada, and for Fox in the U.S. on their coverage of the 2019 Women’s World Cup, pictured above). She’s currently in a difficult spot, which she posted about on Twitter Sunday; she gave birth to baby daughter Paris on March 24, but suffered heart issues later in the week and was taken to hospital, where she may have been exposed to the COVID-19 coronavirus. That’s led to her having to isolate herself from her husband and her new daughter:

Asking for your prayers as it’s been a difficult few days since giving birth.

Rushed to the hospital from breathing issues which was a plueral effusion brought on by heart failure.
Possible exposure to covid-19 at hospital so now I am self quarantined from my baby girl/hubby😢 pic.twitter.com/DmlcXPqOc2

Here’s a transcription of that video:

“Thank you for your prayers; I’ve had a difficult last couple days. You know, we gave birth to baby Paris just over a week ago, which was amazing. She’s happy and healthy. But after getting home from the hospital, I noticed some shortness of breath and just some weird things going on with my body, called my doctor after a couple of days, and it turned out I had pleural effusion from heart failure, which, thank God we went to the hospital.”

“But because I was in hospital for two nights, two additional nights, there was a COVID-19 passing, and I could have had exposure. So I’m home now, but self-quarantined in a room where I’m separated from Paris and my husband. So I can’t hold her, touch her, put her down for bed at night, which is really difficult for a mom who’s just given birth and all the connections and emotions that I’m having.”

“So I’m asking for your prayers that these 14 days, it’s 11 days left, go by well, that I don’t have the virus. Because obviously my system’s not as healthy as it usually is with having liquids in my lungs and whatnot. So I’m just asking for your prayers. And I hope that you all are enjoying your time with loved ones, and if you aren’t with them, reach out to them. Because, I’ll tell you, the drive to the hospital when the doctor said to get to the hospital as quick as possible, was a difficult one. She was holding my finger.”

“And you know, you have that moment of—I told myself I was not going to cry, cause I’m just going to get through this video, but you have that moment of ‘I just want to be around for her life.’ Anyway, please, prayers, and just keep loving and helping others wherever you can, and being of service to others wherever you can. And even if that means picking up the phone and calling someone to tell them that you love them or that you’re sorry.”

That’s certainly a rough week for LeBlanc, and it’s awful that she’s now isolated away from her husband and her new daughter. Our thoughts go out to her.

It's never a good thing when a franchise icon calls you out in public.

It's never a good thing when a franchise icon calls you out in public.