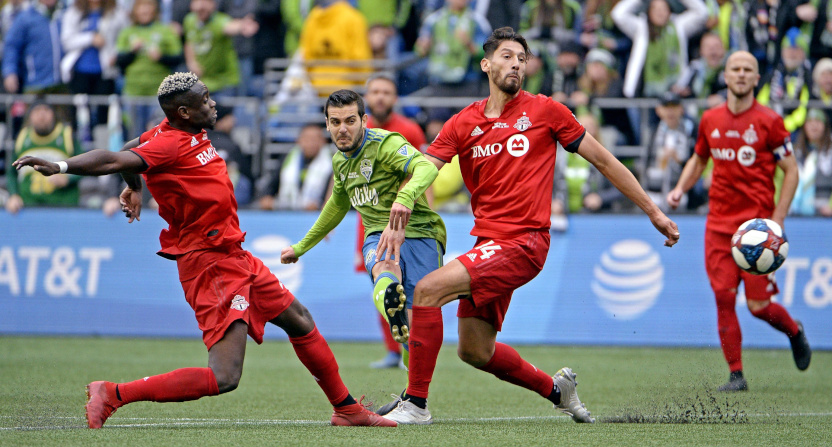 While the U.S. ratings for Sunday’s MLS Cup final between Toronto FC and the Seattle Sounders were way down from last year, the same wasn’t true in Canada. In fact, almost as many people watched that game (which took place at 3 p.m. Eastern Sunday) north of the border as south of the border, despite the U.S. having 330 million estimated people to Canada’s estimate of 37.6 million. And that’s also true despite differences from the game being on free-to-air broadcast TV in the U.S. and on cable TV in Canada; the English-language U.S. broadcast on broadcast network ABC averaged 823,000 viewers in the U.S., while the Canadian broadcast on cable network TSN (and in competition with the CFL’s playoffs, with the East semifinal and the West semifinal both airing on TSN 1 and 5 at noon Eastern and 4 p.m. Eastern respectively, relegating the MLS Cup to TSN 4) averaged 748,000 viewers.

Senra (the former CFL director of communications who now works for Toronto esports teams) also posted numbers with the French-language broadcasts added in:

If you include the Spanish-language numbers, the U.S. broadcast of the MLS Cup got up to 1.2 million (as ESPN’s Taylor Twellman stated in a very, very stupid argument with World Soccer Talk to try and claim that the U.S. MLS Cup numbers were good), so that’s a bit of further separation. There probably were some French numbers for the MLS Cup that Senra’s tweet didn’t cover, as the game was broadcast in French on TVA, but they likely weren’t large, as the Montreal Impact weren’t involved in the MLS game and the Montreal Alouettes were in the CFL’s East semifinal. Still, it’s rather amazing that the English-language MLS Cup broadcast in Canada almost hit the average audience of the English-language broadcast in the U.S., despite the U.S. telecast being on a broadcast network instead of on cable and despite the U.S. having almost 10 times the population of Canada. (It should be noted that most Canadian TV viewers can also pick up ABC; however, the ABC feed was probably simsubbed with Canadian commercials, and any viewers there don’t count for either country’s audience.)

This is somewhat of a similar narrative to what we saw with the 2019 NBA Finals, which also included a Toronto team (the Toronto Raptors). The U.S. ratings were way below what we’ve usually seen, and only having one U.S. market was a key part of that, but the Canadian ratings were through the roof, with the sixth game delivering 8 million Canadian viewers and the fifth delivering 6.9 million. And it’s certainly interesting that there are so many Canadians watching the MLS Cup, especially at a point where the U.S. audience doesn’t look so great. (Although, this number is still a significant decline; the last Toronto FC-Seattle Sounders MLS Cup clash in 2017 averaged 1.3 million Canadian viewers.) But even with that decline, it’s remarkable how much traction MLS has in Canada in terms of sports viewership relative to the U.S., especially with this final going up against CFL playoff games and NFL regular-season games.