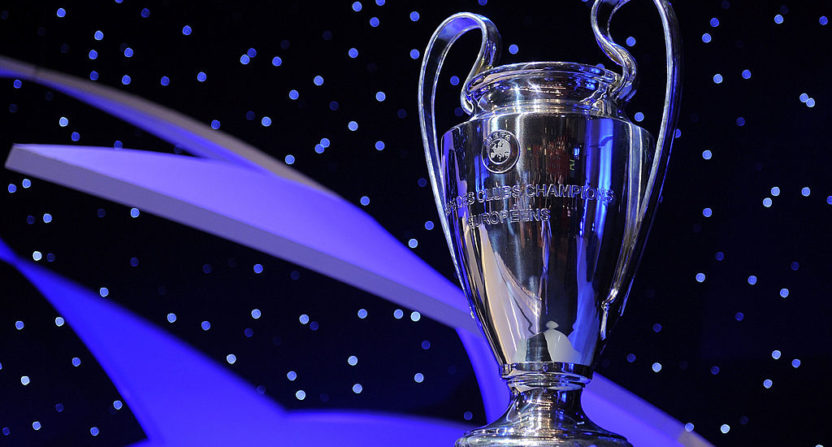 It’s time to start another round of bidding for the UEFA Champions League in the US, and interested parties will be expected to break the piggy bank to secure the rights.

Per Bloomberg, the deadline for bids is August 15th, with both three and six year offers being accepted. CBS is the current English-language rightsholder in the US, and Univision has the Spanish-language rights. The two companies are paying a combined $150 million per season on the deal, which expires after the 2023-24 campaign.

Bloomberg reports that UEFA has already talked to pretty much every player on the US sports media landscape about the rights.

UEFA has had preliminary discussions in recent weeks with Comcast Corp.’s NBC, Walt Disney Co.’s ESPN, Paramount Global’s CBS, Amazon.com Inc., Apple Inc., Fox Corp., Warner Bros. Discovery Inc., Univision and DAZN, according to the people, who asked not to be identified because the discussions are private.

“Preliminary discussions,” of course, can mean many different things, especially when nine companies are listed as those UEFA had “preliminary discussions” with. UEFA already has a relationship with many of these companies – ESPN is airing the Women’s Euros as we speak, and Fox is UEFA’s newest domestic TV partner for the Euros, Nations League, and World Cup Qualifiers. Fox also aired the Champions League during the last decade, while Turner had a brief run as the Champions League rightsholder before bailing early to allow CBS to take over after the pandemic. DAZN, though it has drastically scaled back its US rights, has deals with UEFA in several European countries and Canada. Amazon has also inked a deal with UEFA to air the  Champions League in the UK beginning with the 2024-25 campaign.

UEFA will earn at least $250 million per season for the Champions League’s rights due to a deal it struck with Relevent Sports. The company is reportedly seeking a stunning $2 billion over six years for the package, putting it more in the ballpark of what the Premier League got from NBC and Telemundo last year ($2.7 billion over six years). If a bidding war between several parties happens, maybe UEFA will hit that number.

I’m actually curious if what happens with American football, specifically the Big Ten, has an impact on this bidding. If ESPN keeps a chunk of the conference’s rights, maybe it won’t want to splurge on nine figures a year to UEFA. If NBC, now lacking a cable sports network following the shutdown of NBCSN, wins part of the Big Ten package, maybe it sticks with the Premier League as its lone soccer package. If current rightsholder CBS misses out on the Big Ten, following the departure of the SEC, rolls some of that money into retaining the Champions League.

As a fan, I think the top three (in whatever order) for overall experience would be CBS, ESPN, and NBC, which have all excelled with their soccer broadcasts over the years (to varying degrees) and have comprehensive apps that can handle the volume of matches in a given window. Amazon and Apple are wild cards – they’ve got the apps, but are unknowns for soccer presentation in the US. I don’t have much time for DAZN, Fox, or Warner Bros. Discovery – DAZN is pretty much a non-factor in the US sports landscape, and both Fox and Warner Bros. Discovery (pre-merger) hit plenty of bumps in the road in their time broadcasting the Champions League.

I’m curious about both who wins the rights and how much they pay, because I feel like the Champions League has been undervalued for quite awhile due to its schedule of midweek, midday matches. If a company is going to pay what UEFA is reportedly seeking, they’re going to need to treat it like the elite competition it is and not just a vehicle to occupy airtime or drive subscribers to a streaming service.