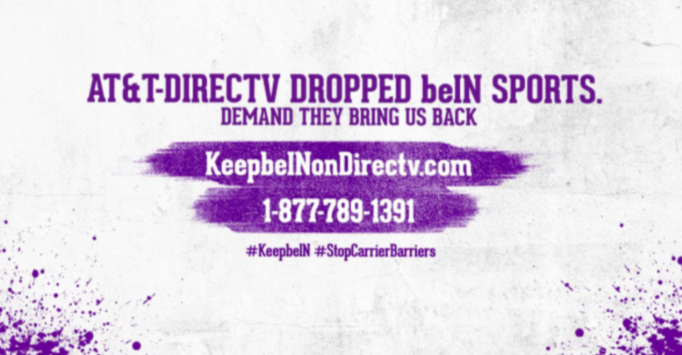 Things aren’t looking promising for cable sports channel beIN Sports. The outlet that primarily televises soccer has expanded its portfolio in recent years, most notably by adding Conference USA and showing a number of different sports throughout the league. However, it’s in the channel’s original wheelhouse where they’ve suffered programming losses. Most notably, ESPN’s capture of Serie A rights beginning this season.

As soccer rights become more and more dispersed throughout a number of channels and streaming platforms (see: ESPN+, Turner, etc), it has certainly had an effect on beIN and their standing in the marketplace.

After being dropped by Comcast and Verizon Fios earlier this month, the channel has now also been dropped by AT&T, which means it won’t appear on DirecTV or U-Verse. When it comes to carriage disputes, when it rains it pours.

beIN sent out this tweet asking its fans to contact AT&T to bring them back to the service.

Disappointed @DIRECTV & @Uverse have dropped beIN SPORTS’ channels, despite the offer to extend our contract. We remain willing to negotiate & hopeful that they will work with us! Apologies for the inconvenience. To #keepbeIN & #StopCarrierBarriers go to https://t.co/YQkns5M8Dk pic.twitter.com/6DWjQUH0R1

If you visit the beIN website in that tweet, it says the following about the current dispute:

In tweets to followers, beIN is saying that AT&T refuses to put the channel on a lower price tier so that it’s affordable for subscribers.

Hey Kathie,
We understand your frustration, but we are fighting DIRECTV to put our channels in lower packages where viewers pay less. Help us #StopCarrierBarriers and #KeepbeIN on DIRECTV by visiting https://t.co/YQkns5M8Dk or calling 1-877-789-1391.

This is going to be a very tough, uphill battle for beIN. They’re losing more rights than they are gaining at the moment and unless they are able to make a big play for a major rights package like the Premier League or Champions League (which aren’t going anywhere anytime soon) then their argument to get wide distribution is likely going to fall on deaf ears.

The fact that AT&T has already pulled the channel without the usual public back and forth that we typically see in these carriage disputes trying to force a deal is a discouraging sign. AT&T clearly feels like they have all the leverage here. And with beIN already removed from Comcast, it’s not like they’re on an island with this decision.

When you add on the fact that beIN had a claim dismissed by the FCC complaining about Comcast discriminating against them because of competition from NBCSN and it’s hard to see where the network turns from here as it moves more and more into the margins. It’s a shame too, because it means fewer and fewer fans will now have access to La Liga and some of the top soccer teams in the world on a weekly basis. And it means less access to Ray Hudson.