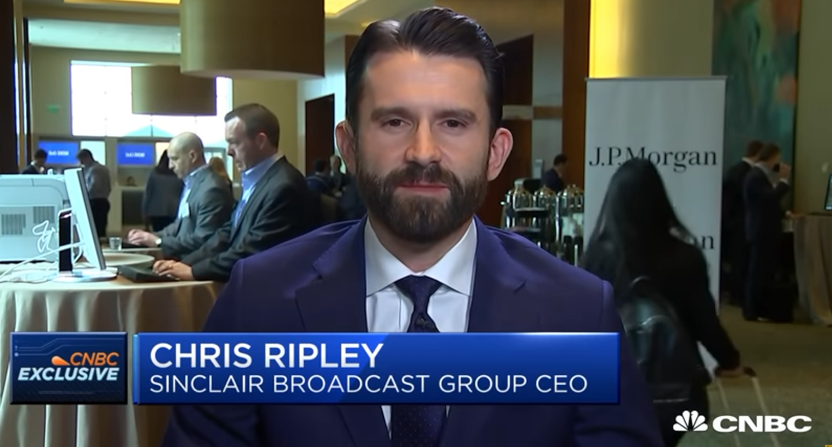 The long-anticipated rollout of Sinclair’s Bally Sports+ over-the-top streaming service is almost here—at least for those in five markets. A Sinclair direct-to-consumer service has been in the works almost since that company’s acquisition of those regional sports networks (formerly known as the Fox Sports regional networks) from Disney in 2019, brought up as early as December 2020 and discussed further throughout 2021 around their raising funds for it, the conflicting claims on if the distributors they work with on the linear side had signed off on this, their “first half of 2022” launch date, and their stated price point (initially $23 a month).

This year, the talk had been about a soft launch in Sinclair’s second quarter (which runs April-June) and a price shift (to $19.99 a month or $189.99 for a year). And they’re now set to get in just under the wire of both Q2 and the “first half of 2022,” with John Ourand of Sports Business Journal reporting Monday that the Bally Sports+ OTT service will soft launch in five markets (the five where they have OTT MLB rights: Kansas City, Milwaukee, Miami, Detroit, and Tampa) on June 23, which is this Thursday. Their plan for a full launch is still this fall. Here’s what Sinclair CEO Chris Ripley (seen above in a 2019 CNBC interview) told Ourand on what the company’s hoping to accomplish with this soft launch:

“This is all about just testing, learning, iterating, and getting our full marketing plans in place,” Ripley said of the soft launch. “There isn’t necessarily a milestone that I can point you towards that says, this is what marks when we take the next step.”

…“We’re talking a three-month ramp from soft to full launch. But we thought it was a smart idea to get some reps under our belt before we go wider.”

…Ripley feels a need to launch a streaming service to attract sports fans who do not subscribe to traditional pay-TV services.

“When we first went down this road three years ago, we did extensive research on this segment and identified a huge amount of fandom outside of the pay TV bundle,” Ripley said. “Flash forward to launch, two, three years later that has only gotten bigger. It’s a very under-served, very large portion of the population that would want this product, but can’t get it.”

How “very large” that portion is can be debated, but there are certainly people who want the local, in-market games these RSNs carry and can’t get them through their existing cable/ satellite/virtual multichannel programming distributor, to say nothing of people who want those games and don’t have a MVPD at all. And while the Bally Sports+ package is pricey relative to most subscription video on demand services, it’s cheaper than NESN’s recently-launched $30 a month offering, and certainly cheaper than any MVPD option that carries the Bally RSNs. (And there are fewer and fewer MVPDs carrying those RSNs, which is a big part of the rationale for this move.)

There are other advantages for Sinclair in gaining DTC subscribers rather than those who subscribe through MVPDs. Ripley has frequently discussed their plans for interactive betting on this new DTC streaming product, which they’re able to do in a way they weren’t on linear broadcasts. (Some of the betting options may also apply to those who have a MVPD and stream games through TV Everywhere authentication rather than watching through the MVPD; Ripley notes that TV Everywhere’s currently only a small focus for them, but maybe that changes if there’s a compelling reason to watch the stream rather than the linear broadcast.)

Beyond that, Sinclair now is in direct communication with those customers, and gets payments directly from them rather than through a MVPD middleman. And, most crucially, the duration of a subscriber’s relationship with Sinclair is now at the subscriber’s choice, rather than based on if the customer’s MVPD decides to keep carrying these networks. But even with all that, though, MVPDs still matter: the MVPDs that carry Bally Sports networks are still going to matter for those who want not just Bally content, but also other linear sports, entertainment, and/or news channels.

In the U.S. sports space in particular (unlike Canada), there are very few full over-the-top options. ESPN, TNT, TBS, and the broadcast networks (apart from CBS, which offers its full local linear feed through Paramount+) are still keeping much of their sports content to linear TV without a DTC option. And Ripley tells Ourand he thinks linear MVPD relationships will still matter for Sinclair as well for quite a while:

Ripley envisions the streaming service existing side-by-side with the linear TV service — a “hybrid environment,” he called it — for the foreseeable future.

“It’s really the only way the ecosystem will work, and it’s going to work that way for years to come,” he said. “You can’t just be solely reliant on a direct-to-consumer product. That would be a really problematic situation for everybody in the ecosystem, if that’s all you had.

That fits with what many other people in the TV industry have said about the need for that hybrid approach, including ESPN’s Jimmy Pitaro this week. And that’s notable, considering that Sinclair is going much further than ESPN is. Yes, ESPN has found success with ESPN+, but they’re not particularly close at the moment to offering a full over-the-top option for their linear channels. Even with that, though, Ripley is still describing this DTC offering as an addition and as a hybrid model “for the foreseeable future,” not as something they’re fully looking to shift all their consumers to. We’ll see how this soft launch goes for Bally Sports+ this week, and how their streaming strategy evolves over time.