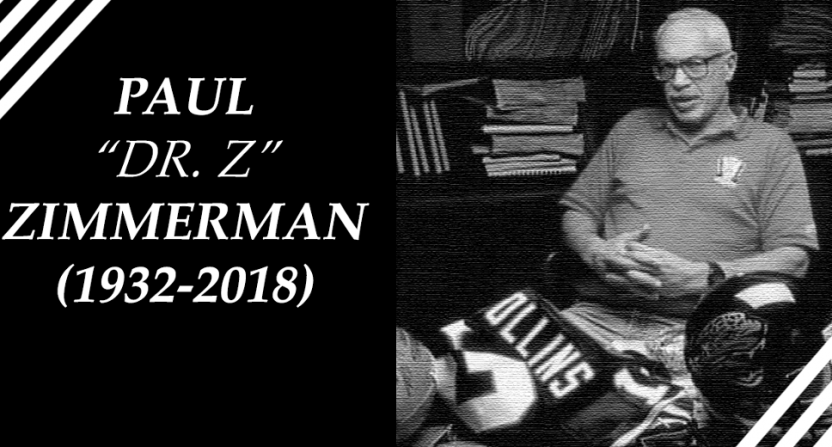 Long-time Sports Illustrated writer Paul “Dr. Z” Zimmerman passed away Thursday at the age of 86, and there was a massive outpouring of tributes from across the football world. NBC’s Peter King, a colleague of Zimmerman for many years (and the compiler and editor of last year’s Dr. Z: The Lost Memoirs of an Irreverent Football Writer) reported the news on Twitter:

We have lost a legend.
Football writer/raconteur Paul Zimmerman, 86, died this afternoon.
There’s only one Dr. Z. He’ll be missed.

Zimmerman played college football at Stanford and Columbia, then moved on to journalism, initially working for The New York Journal-American and The New York World-Telegram and Sun before heading to The New York Post in 1966. He covered the Jets there (and memorably feuded with Joe Namath at times), but also other sports, including three Olympics (and including the 1972 Munich hostage crisis).

Zimmerman’s football writing and his regular mailbags (which also referenced his regular wine column for the Post) gained wide acclaim, and he moved to Sports Illustrated in 1979. He worked there until he suffered a series of strokes in 2008, and also published several books during that time (especially 1984’s The New Thinking Man’s Guide to Pro Football). And he made an incredible impact along the way, writing about football in an analytical way, regularly answering  reader questions, and even providing the foundation for a lot of what we do here with his yearly announcer rankings. That’s all shown in some of the tributes to him Thursday from SI writers and editors, other members of the sports media, and well beyond:

Z got the Internet—its tone, its voice, its rage and how to disarm it—faster than peers a third his age. His Mailbags, his dialogue with his readers, the "rippers," was the gold standard. And "A Thinking Man's Guide to Pro Football" was a half century ahead of its time. RIP https://t.co/08q9uXl3UY

My fave @sinow Dr. Z story, from 1985 on Howie Long. Like a Dennis Lehane novel, only better https://t.co/3yhbxCj6iY

When I was helping to launch SI's first web presence in 1995, Dr. Z was one of the first writers I was able to talk into writing for the new-fangled Internet. One of a kind. https://t.co/cxgzZ44mEq

So many people in our business were inspired to dream to do this work by Paul Zimmerman. Neil Hornsby, the founder of @PFF. KC Joyner, Doug Farrar … and so many more. He had more influence on the business than anyone I know.

I can't imagine modern NFL analysis without Dr. Z. He was the first to do what most of us do, and he did it better than most of us ever will. A truly unique voice. https://t.co/5S6ZLRwrM8

When I joined the @SInow staff in 2013, the thing that freaked me out the most was that I would be working where Paul Zimmerman once did. I wrote this about his legacy that year. https://t.co/IXmE38MNqM

He absolutely did. Much of what we do in PFF is based off his work grading players and his idea that to understand what is going on, you have to do the work. He was the literal definition of an inspiration. It's a very sad day. https://t.co/5PT5dLjrMH

Yesterday I celebrated my 15th anniversary of the start of my career. That career would have never started had it not been for Dr. Z. I am stunned and saddened by his passing. Thoughts go out to Linda and the rest of his family.

Many years ago, before I had ever made a dime writing about the NFL, I wrote something on some little-known website about my love of Dr. Z. He sent me an actual ink-on-paper letter thanking me for it. Getting that letter remains a career highlight. https://t.co/YET2o5Ax5Z

It was my great fortune to interact with Dr. Z throughout my career – his support and encouragement was tremendous and I sincerely appreciated it – a sad day. https://t.co/trI5OwH1Je

Well, dammit. I always felt I learned something every time I read Dr. Z, and he was fun, too. https://t.co/uVu8Lzs9FR

The New Thinking Man's Guide To Pro Football is probably the best football book ever and had a massive influence on me. Dr. Z is a legend and will be greatly missed. I am so, so glad I got to introduce myself at a Dolphins practice a few years back. https://t.co/A083nmNDBL

In the summer of 2012, before I started writing about football for the first time that fall, I read Dr. Z's book and then I read probably 50 Dr. Z SI articles. It made me infinitely smarter about the sport and how to approach the sport. He ruled.

Dr. Z is one the reasons I wanted to write about football in the first place. He was an absolute giant in this world. https://t.co/fCyUtEn9aw

I grew up waiting by the mailbox every Thursday to read Dr. Z. in Sports Illustrated. Before NFL Network, before the internet, he was the way my generation stayed connected. RIP.

There was nothing like sitting next to Dr. Z in the press box. He had charts, pens, highlighters, notebooks, grunts, mutterings, and a stopwatch. He was covering a game you didn’t know existed. He also felt no guilt about his materials invading your space. He had earned it.

Awful news. We throw around the word legend a lot but it truly applied to Dr. Z.

Further tributes to Dr. Z can be found at SI and NFL.com. Our thoughts are with his family and friends.