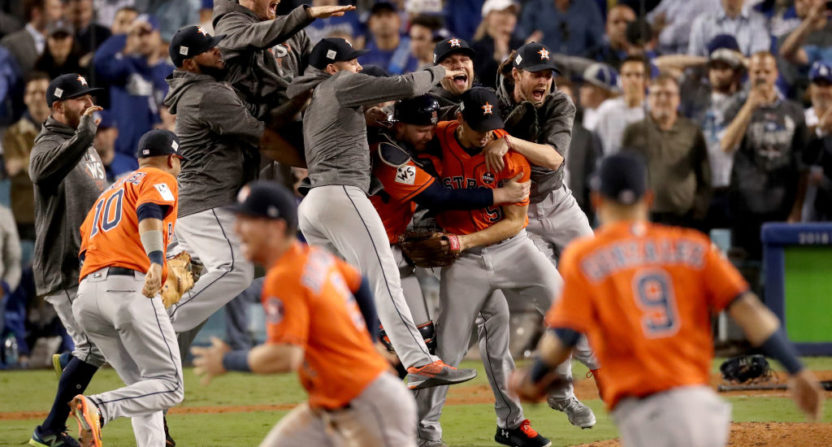 There’s often a lot of inconsistent discussion out there in the media around market size, which is generally used as shorthand for “financial resources” but actually refers to the numbers of people in the team’s area. Occasional AA contributor Jason Clinkscales highlighted this in a newsletter recently, pointing out how different teams in the same area are considered “small-market” or “big-market” and how “big-market” discussion sprung up about the Miami Heat once LeBron went there (but not the other Miami teams). And one of the worst and most glaring examples of someone completely misrepresenting both market size and financial resources came from Sports Illustrated‘s Tom Verducci this week, in a piece published Wednesday titled “In Acquiring Zack Greinke, Astros Stomp on Yankees and Other Big-Market Superpowers.”

Before we even get to the content of the piece, it’s worth breaking down that anyone considering the Astros not a “big-market superpower” has a rather interesting definition of what a big market is. By Nielsen’s estimates for the 2018-19 TV season, Houston is the seventh-largest TV market in the U.S. with 2,423,360 million TV households, ahead of San Francisco-Oakland-San Jose, Boston, and Atlanta. By city population, Houston is the fourth-largest U.S. city. And if this is really a way to argue that the Astros don’t have financial resources (which largely isn’t about market size), well, Spotrac has them with the sixth-highest payroll in MLB this year (post-Greinke addition) and the ninth-highest last year. They’re also worth an estimated $1.875 billion as per Forbes (10th in MLB), and they’re owned by Jim Crane, whose net worth is estimated at $2.5 billion. And they won the World Series two years ago (seen above). So it’s pretty hard to see them as some plucky underdog based on “market size” or finances. But let’s get to Verducci’s actual piece, particularly its opening:

The Astros played a game only five years ago that nobody watched. A Monday afternoon game against the Angels drew a television rating of 0.0. They were the fallen franchise that nobody heard crash. Houston lost 92 games that year, which happened to be an improvement over the previous three seasons of 111, 107 and 106 losses.

Just three years later, Houston won the World Series, a credit to the remarkable turnaround engineered by general manager Jeff Luhnow. And Wednesday, just before the clock ran out on the trade deadline, the Astros planted another flag–not another championship, not yet anyway, but a bold statement everybody from the Bronx to Las Vegas could not miss.

The game “nobody watched” is a hell of a way to start that, but it’s missing some vital context on what actually happened there. First off, a 0.0 rating does not mean that no one watched; it means that no one in the Nielsen sample in that market watched. And those samples have particular issues when it comes to the low ranges of audiences; they’re better at measuring how one bigger-audience thing compares to other big-audience things, or even more so how a big-audience thing compares to that own thing in the past, but when they deliver a 0.0, it doesn’t mean literally no one watched. In fact, SI’s own 2014 story on a Houston 0.0 (by Jon Tayler) illustrated that:

In other words, not one of the 579 TV set-top meters set up by Nielsen in the city to measure local ratings was tuned to the game, a 9-1 Houston loss. Ratings-wise, the game lost to its own pregame show, which got a 0.2, or roughly 4,600 viewers. Of course, that doesn’t mean that the Astros didn’t have any viewers Monday; CSN Houston reaches 500,000 households in the area, so the odds are that at least one of those TVs was tuned to the game.

The Astros have actually picked up multiple 0.0s over the years, the aforementioned April 2014 one and a September 2013 one. But both of those come with context. First, there was strong local sports competition for both; in September 2013, that was a Houston Texans NFL game on the local CBS affiliate, and in April 2014, that was a rescheduled NASCAR race on Fox. But even more importantly, the network and carriage situation here is vital to consider; those games were on CSN Houston, which went into involuntary bankruptcy proceedings shortly after the Sept. 2013 game, and which had major carriage issues with everyone outside Comcast (Tayler’s story notes that CSN Houston reached 500,000 households at that point, so that’s slightly over a fifth of the Houston TV households). And, while Verducci does note the team’s losses those seasons, those are also important factors to consider in the ratings for any given game.

But beyond that, the rating a team draws for a single RSN broadcast is almost an inconsequential comment on their actual resources, and a look at the structure of the Astros’ TV deal then indicates that. Their deal was for a 46 percent stake in CSN Houston (so they did slightly care about the ratings), but more importantly, also for an average of $80 million in rights fees (which had no connection to the ratings).

Of course, the Astros didn’t wind up getting all of that money given the mess of CSN Houston’s bankruptcy. But the ratings were not the reason why, and when it comes to rights fees, it’s the network that’s worried about audience, not the team. And even the network shouldn’t be that worried about audience; the larger portion of RSN revenue, like many sports networks, comes from per-subscriber fees, not advertising, so it’s more important that people get your channel than they watch it. (Of course, if they get it and don’t watch it, that can convince networks to drop it the next time a carriage dispute comes around, but that’s another issue.)

Verducci goes on from there, though, and the way he sees the Astros is particularly evident later on in the piece. Let’s check that out:

The Dodgers have the best record. The Yankees have the most resources. The Red Sox have the highest payroll. But everybody is chasing Houston.

The Astros officially announced themselves as an upstart superpower, the team that is running laps around New York, Los Angeles and Boston, the financial superpowers who did nothing of significance at the deadline.

Ah, yes, the “upstart superpower” that only won the 2017 World Series, did so after trading for one of the best pitchers on the market in Justin Verlander, plays in the U.S.’ fourth-largest city and seventh-largest media market, and has had a top-10 payroll the last two years. And sure, yes, the Astros are not spending quite the overall amounts the Yankees, Red Sox, or Dodgers are, but they actually have a higher current 25-man payroll ($148.9 million) than the Yankees ($134 million) or the Dodgers ($118 million). And given the team’s valuation and Crane’s wealth, they could probably spend to the overall level of those other teams if they felt like it. But they’re just some poor small-market underdogs, all right.