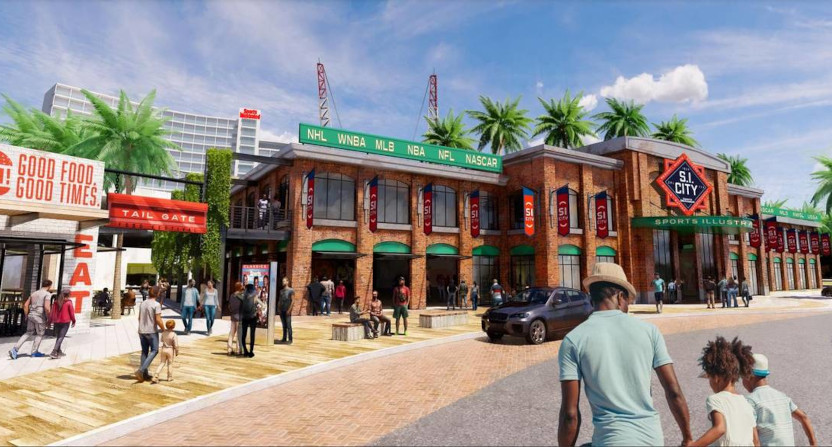 When Authentic Brands Group bought Sports Illustrated from magazine publisher Meredith (which itself bought SI as part of their 2017 purchase of Time Inc., but was quickly looking to sell it)  back in 2019, much of the discussion was about how ABG wanted the SI name for branded ventures. That’s what they’ve done with many of the estate name, image, and likeness rights they control, from Muhammad Ali to Marilyn Monroe. And ABG sublicensed the actual publishing operations of SI to the company then known as The Maven, now known as Arena, keeping their own involvement to branding deals (some of which took criticism, including “brain formula” supplements and a JC Penney clothing line). And one of those branding deals, for resort hotels, now has some more information out there.

Earlier this year, ABG announced that they were launching Sports Illustrated resort hotels, saying that their first ones were set for the Dominican Republic and Orlando. But while the Dominican Republic venture is still likely to be the first one to open (likely later this year), the Orlando one isn’t expected to open until 2024. And another one is now also planned to open that year.; Mary Perez of The (Biloxi, MS) Sun Herald writes that there’s a $410 million SI-branded development in the works for D’Iberville, Mississippi (near Biloxi). Here’s more from Perez’s piece:

One of the first Sports Illustrated Resorts in the U.S. could be coming to South Mississippi with hotels, a family entertainment center and a crystal lagoon. The $410 million resort would be built on what originally was to be the site of the Gulf Coast Galleria shopping center.

…The D’Iberville City Council on Tuesday unanimously voted their support of Blue Water Beach — the working name of the resort — and agreed to to Issue Tax Increment Financing bonds to cover part of the cost of infrastructure improvements for the new development.

The centerpiece of the D’Iberville resort will be an 11-acre Crystal Lagoon that features a clear sand beach and a Storyland family entertainment center with indoor and outdoor attractions.

“It will celebrate our culture here,” said Chris Gouras with Gouras & Associates consultants, who is handling city, county and state incentives for the project.

Tentative plans call for three hotels, the largest with 200 to 300 rooms, along with shopping, theme restaurants and entertainment such as live music, dance and film festivals.

We’ll see how this plan goes. Perez’s piece notes that while the council has voted to support this and issue financing bonds, the developers haven’t actually bought the site yet (that’s planned for later this year), and the resort would not be expected to open until late 2024 at the earliest. And there’s a lot that could change in between now and then. And whether this would actually attract the 1 to 2 million annual visitors Gouras projects is also a matter of debate. But it does sound like there are plans to lean into the sports theme:

The location of this property in D’Iberville — on the interstate with access to major markets and people coming to the Gulf Coast — makes it the right location for the resort, said Christopher Schroeder, CEO of Experiential Ventures Hospitality, one of the developers. The active lifestyle resort will focus on immersive and interactive attractions, he said, where families and couples can enjoy surf riders, ziplines and other experiences, like emerging from the “stadium” tunnel onto the field and seeing themselves pictured up on the scoreboard.

There’s an interesting history of attempts to use sports and sports media branding in the hospitality space, from the ESPN Zones to the Fox Sports Grills to various Barstool plans to team airport restaurants and a long list of player/coach restaurants. But doing it for a full resort feels like a notable further leap; even Disney, owner of ESPN, only branded their sports-themed hotel as the “All-Star Sports Resort” rather than anything specifically ESPN. So we’ll see how this works out for ABG and SI.