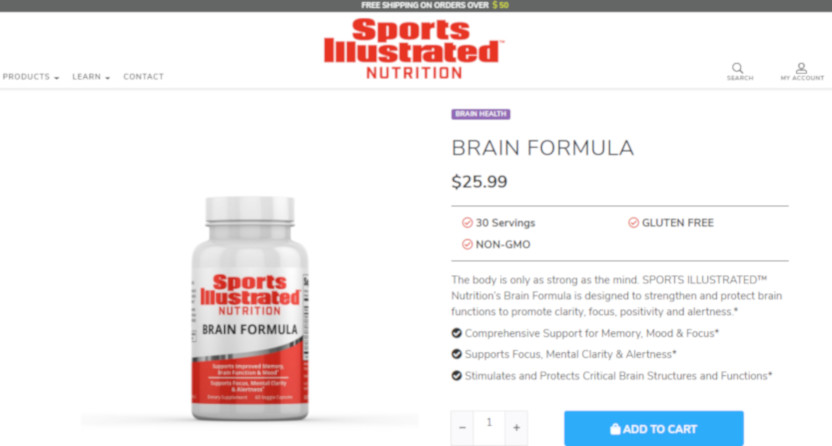 Many of the controversies around Sports Illustrated in recent months have involved operator The Maven, including multiple rounds of layoffs, firings, and pay cuts, questionable people, sites and reports under either SI proper or The Maven’s wider network, further print reductions, Maven finances, and even suggestions that owner Authentic Brands Group (which bought SI from Meredith, then hired The Maven to operate it) might intervene for change or get out of their operation deal altogether. But the latest discussion around SI is all about ABG, and about something they’ve done that fits right in with concerns that were raised about ABG and their branding-focused plans in the first place. That would be launching a line of SI-branded nutritional supplements, including a “brain supplement.” Here’s more from the “About Us” page on the new sportsillustratednutrition.com site:

For more than 65 years, Sports Illustrated has shaped the narrative around sports, capturing moments and making them history.

As an unparalleled & influential leader in culture, SI creates communities that connect players, teams, and fans to the world of sports.

Oh, and there is of course a “*These statements have not been evaluated by the Food and Drug Administration. This product is not intended to diagnose, treat, cure, or prevent any disease.” disclaimer at the bottom. And that disclaimer also appears in a lot of the text on individual product pages, such as the “Brain Formula” one seen at top. Here’s another one, for their “Intensi-T.”

How about some nitric oxide?

Or collagen and enzymes?

Where are these supplements coming from? Well, the “Contact Us” page lists “SPORTS ILLUSTRATED™ Nutrition HEADQUARTERS, 1289 Clint Moore Road, Boca Raton, Florida 33487.” The state of Florida business registry lists a number of companies at that address, some with names referencing bioscience or nutrition. One notable one may be Wellness Watchers Global, a supplement company that runs “Greens First” (also listed as a company at that address), has front-page links about “the dangers of nanotechnology in food” and touts health tips from president “Dr. Donald Hayes, D.C.” (his doctorate is in chiropractic medicine).

It’s unclear if SI Nutrition is specifically connected to Greens First or to other companies at that address; the SI Nutrition page doesn’t appear to spell out who’s making their products, and their FAQs page is only about specific products. But it is notable that you can’t get a refund if you aren’t satisfied with the products. You can get a refund minus shipping for unopened products within 21 days, but “your item must be in the same condition that you received it, unopened, unused in its original packaging, with no seal broken.”

The Sports Illustrated brand has been used on many things over the years, of course, from jackets and other team merchandise to books and DVDs commemorating specific championships to video games, Swimsuit Edition TV specials and swimsuits, and even the football phone. But supplements do feel like quite the unusual step for them, especially in a time where many non-FDA-evaluated supplements and those who promote them have come under fire. And this definitely brought a lot of criticism for SI and ABG Tuesday, including from former SI writer Grant Wahl (a SI veteran since 1996 who was fired in April with no severance after he complained about Maven trying to use the pandemic to implement permanent salary cuts):

I'm not at Sports Illustrated anymore, but I spent 23 years there, and it's the only place I've ever worked full-time, and every day I feel like it's being degraded beyond recognition by its new owner @AuthenticBrands and its new operator @MavenCoalition. And I think it's tragic.

And Wahl was far from alone in tweeting criticisms Tuesday. A few others, including former SI staffer Andy Glockner:

Catching up on what we used to call "news" … and we have a massive federal loan to Kodak so they can make … pharmaceuticals?? … and Sports Illustrated is selling …. nutritional supplements????

Where the hell can I get off this ride?

Once upon a time, every sports writer dreamed of having a byline in @SInow and now it's a damned front for sketchy nutritional supplements. https://t.co/WnNsJhAgf5

A rail of this, and you're in the lotus position on top of Wrigley Field, calculating Mike Trout's WAR to the 473rd decimal place. pic.twitter.com/v7HsJNvM8k

ABG will probably get some sales of these products, to be sure, especially as they’re already available on Amazon as well as through the SI Nutrition page. But this kind of usage of the brand is yet another blow to whatever image SI had left. And based on past discussions about what ABG wants to do with the SI brand, though, it may not be the last one. Here’s what Jean E. Palmieri wrote on that front at WWD.com in April 2019:

If Authentic Brands Group is successful in snapping up Sports Illustrated, it would undoubtedly become primarily a licensing and digital play.

According to sources, the print magazine would continue to be published for at least the next two years as ABG works to capitalize on its content to extend the brand’s reach into a number of sports-related businesses. That could include everything from camps for kids to sports rehabilitation clinics, sources said.

So supplements may wind up being just the start.