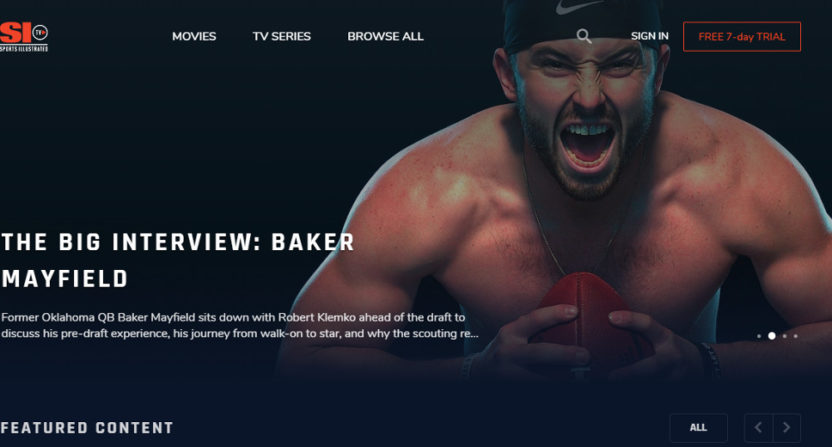 A big part of Sports Illustrated‘s recent strategy has been expanding its SI TV over-the-top subscription video service ($4.99 for a month or $49.99 for a year) both in content (with new documentaries, studio shows and more) and in distribution (launching a 24/7 linear channel in addition to its on-demand offerings, and offering its channel as part of a fuboTV Sports Plus package subscription in addition to its previous availability through Amazon Channels). And now they’re expanding that distribution even further, adding the option to watch SI TV through a web browser and announcing a planned expansion to an app for Roku, iOS and Android devices next week. Here’s more from their release:

“Launching this app provides sports lovers with even more opportunities to access SI TV’s programming, so whether they go direct or though pay TV providers like fuboTV we offer consumers even more ways to tap into the vast options of SI TV’s original and acquired documentaries, shows and movies that have broad appeal,” said Josh Oshinsky, head of programming for SI TV at Meredith Corporation. “Our strategy is to keep finding ways to bring SI TV to consumers however and wherever they want to watch.”

Beyond that, too, SI TV is making some moves on the content side, and they’re particularly emphasizing their studio programming ahead of this week’s NFL draft. Their Under The Cover show (deeper video interviews with SI cover subjects)’s most recent episode focuses on Penn State running back Saquon Barkley, while their latest The Big Interview is with Oklahoma quarterback Baker Mayfield. They also have a 24 Hours With mini-documentary with Boise State linebacker Leighton Vander Esch, and this year’s final two episodes of The MMQB Draft Preview Show with PFF will be airing this week. And there’s the usual slate of other content, from sports movies through original documentaries like We Town and studio shows like The Crossover, Planet Futbol and The Line.

With continued discussion that parent corporation Meredith is looking to sell or spin off SI, the SI TV efforts are taking on perhaps even more significance. Sports Illustrated has traditionally been known for its print product, but they’ve been emphasizing their web efforts and video efforts recently, and success on those fronts could make them more appealing to many buyers. (Especially considering that much of the pre-Meredith sale talk around SI revolved around various video efforts and the Swimsuit brand.)

And SI is far from the only media company emphasizing direct-to-consumer sales, as that’s exactly what ESPN is doing with the similarly-priced ESPN+ (which has a bigger focus on live games, but does also offer some studio shows and documentaries as well) and what the larger Disney corporation plans to do eventually. So this is a good area to focus on, and offering more ways to easily access it makes a lot of sense. We’ll see how widely adopted SI TV becomes, but it’s certainly notable that they’re putting significant resources into expanding it.