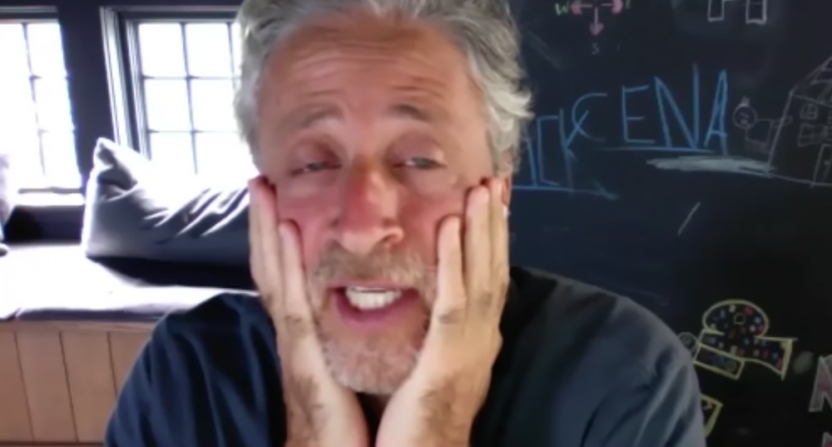 Late-night television and political commentary has missed Jon Stewart, who stepped away from The Daily Show in 2015. (Trevor Noah was an excellent choice to succeed Stewart, however. His viewpoint seems especially important in our current social and political climate.)

But Stewart returned to late-night TV for an appearance on Showtime’s Desus & Mero. Yes, he was there to promote his new movie, Irresistible (which isn’t getting good reviews, drawing a 41 percent rating on Rotten Tomatoes), while also reminiscing about trying to do a show during terrible events like Hurricane Katrina and the Charlie Hebdo shooting, and discussing election coverage.

But Desus and Mero took the opportunity to talk to the famed New York Mets and New York Knicks fan about his two favorite teams and the pain they’ve caused him and his fellow supporters over the decades. (Sports talk starts at the 9:43 mark if you want to get right to it.)

Desus began by asking about the possibility of Alex Rodriguez and Jennifer Lopez owning his beloved baseball team, but Stewart unfortunately didn’t answer that question directly. (As Sportico’s Scott Soshnick reports, there are at least four other groups bidding to buy the Mets. Hedge fund billionaire Steve Cohen appears to be the front-runner.) There had to be a good joke or two in there somewhere.

“Part of the issue for those teams is the way they end up losing,” Stewart lamented. “When you get a banger like [Yoenis] Cespedes and then he gets hurt chasing a wild boar, that’s not a thing that happens to people.”

Stewart then pointed out how Johan Santana’s 2012 no-hitter, which should’ve been a highlight for the franchise, ended up being an indicator of the team’s bad luck. Mike Baxter made a great catch in the seventh inning to keep the no-hitter alive, but suffered collarbone and rib injuries as a result of crashing into the left-field wall.

The no-hitter also effectively ended Santana’s career, with the 134 pitches he threw in that effort exacerbating shoulder troubles that afflicted him through his remaining 10 starts that season. (Though as Ted Berg pointed out years later, an ankle injury may have had a greater effect on Santana’s ability to pitch.)

Stewart’s sports fandom (and misery) might have best been captured by his reaction to a ill-advised fadeaway jumper by JaVale McGee, then playing for the Golden State Warriors, in a February 2018 game against the New York Knicks. The comedian’s anguish became a popular meme.

But the best comedy often comes from pain, right? The Mets and Knicks have given Stewart and his fellow comedians material for decades, and will likely continue to do so for years to come. Those teams winning would result in comedy losing. It’s probably the sacrifice that fans of those teams have to make for the greater good.