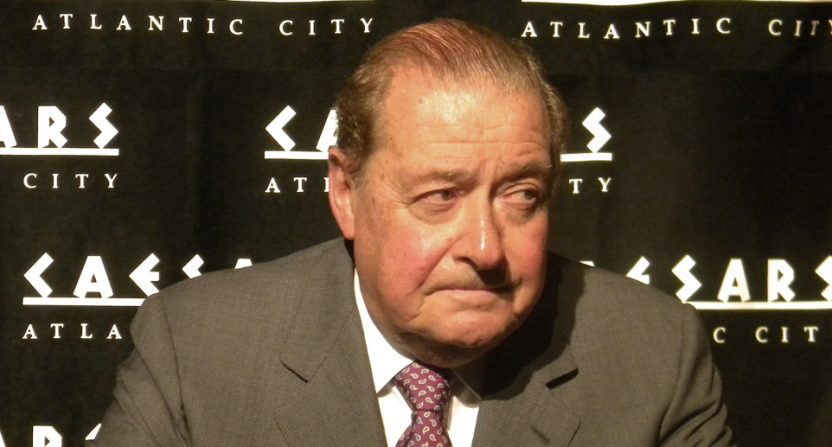 Premium cable networks like HBO and Showtime have long showed boxing matches, but those days may be coming to an end. Last month, HBO announced that they planned to end their live boxing coverage after 45 years, with their final card airing Oct. 27. This week, famed boxing promoter Bob Arum said he expects Showtime to follow suit. However, there are good reasons to think Arum is wrong.

Let’s get to his comments first, though. In a Sirius XM interview with Randy Gordon and Gerry Cooney Monday, Arum (whose Top Rank company has an exclusive deal with ESPN) said he thinks HBO and Showtime are focusing more on competing with Netflix and less on showing sports. Here’s a transcription of that from Michael Woods at Bad Left Hook:

“Both HBO and Showtime are competing for viewers with Netflix,” said Arum, taking a bow for the Saturday effort by Terence Crawford on ESPN.

“So every dollar that they have has to go into what they’re really great at — providing entertainment. HBO certainly has done it. They have really, really good, good programming. And so does Showtime.”

“So I’m predicting also that within the next year Showtime will be exiting from boxing because, as great as they’ve been for boxing, they don’t belong. Does FOX belong in boxing? Of course they do. They’re a regular network that has a lot of sports. ESPN is perfect for boxing. That’s where it’s going. The world never stays the same. It always changes. Their time has now passed.”

This builds on comments Arum made in September, where he said “HBO doesn’t belong in boxing, Showtime doesn’t belong in boxing. They’re entertainment networks and I think they’re beginning to realize that.” However, as Woods notes, while Arum did correctly call HBO’s exit a couple of months before it happened, his Showtime prediction may be harder to cash in.

HBO was showing less fights and less big fights than before ahead of its eventual exit, but Showtime did a ton of live boxing this year (26 world title fights across 12 events) and has more lined up in 2019 (including a three-year partnership with Premier Boxing Champions). And they’ve seen some good results lately, including a 2.5 year high for Adrian Broner-Mikey Garcia in August 2017. In fact, Showtime president for sports and event programming Stephen Espinoza told Boxing Scene late last month he thinks his network will stick with boxing for years to come, and he even took a shot at Arum for his Showtime-bashing:

“As a general comment, I don’t think [Arum] understands our business as well as he thinks he does,” Espinoza said. “Boxing is an important and valuable part of Showtime’s business. Our subscribers respond positively to it and it definitely drives business for us. We’ve been in this sport for over 30 years and, arguably, the last few years have been the strongest period in that entire history. We’ve spent more on boxing this year than we have in the past several years. And next year, we’ll be doing even more. So the reality is regardless of whatever his perceptions are or his assumptions about the business are, we are committed to the sport of boxing. We’re not going anywhere. We’re as excited and positive about the future of the sport as we’ve ever been. It is an important part of our business.

“I think it’s great that more networks are waking up and realizing what a great sport boxing is, and that other networks and platforms are getting into a sport that we’ve been in for 30 years. It’s a positive thing for the sport. But from the Showtime perspective, we have been the industry leader in terms of the quality of the fights, in terms of the amount of fights and in terms of building the next generation of stars. And that’s not gonna change going forward. We intend to be the industry leader for a long time to come.”

There is an awful lot of competition for boxing events now, though, both from networks like Fox and streaming services like ESPN+ and DAZN. So even with HBO leaving, it isn’t a particularly easy environment to work in, especially as there aren’t a ton of stars who have really broke through in terms of mainstream media coverage. And it’s somewhat understandable why there’s some skepticism about how long Showtime will stick with the sport after HBO’s exit.

Still, it should definitely be remembered that Arum is a promoter who likes to say controversial things to get attention (see also Dana White, and the long–running rivalry between the two), and that his company has a deal with one of Showtime’s competitors. His comments are notable, especially given his boldness about the timeline here, and it’s interesting to see him going out on a limb like this. But it’s also quite possible that he won’t be right, and that Showtime will show boxing long after 2019.