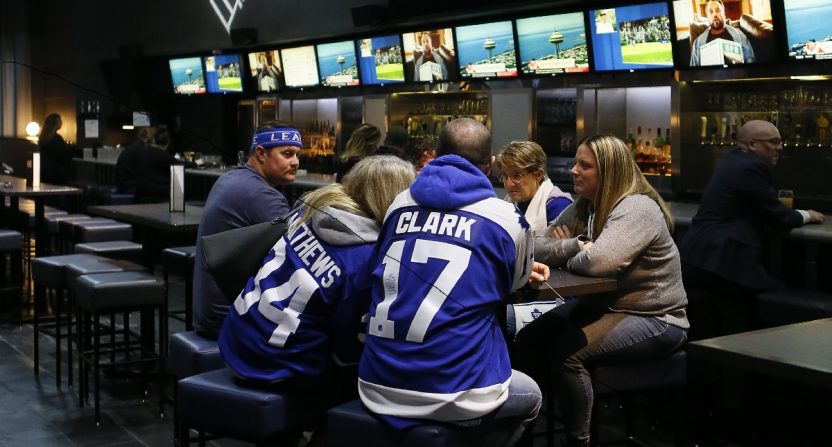 Nielsen’s updated out-of-home metrics have been expected for months now, with networks adjusting for and even selling ads based around them.

Out-of-home numbers were theoretically going to offer a boost for sports broadcasts, which makes sense in a vacuum; bars and other gathering places being counted in some fashion would seemingly reward live sports more than anything else. Some forecasts called for as much as an 11% boost to sports numbers.

Now, though, with crowds packing bars to watch games this fall feeling very unlikely (especially on a widespread, consistent basis), Nielsen will reportedly be pushing that change back. That’s according to John Ourand in Sports Business Journal, who also notes that network executives are pissed:

TV network execs reacted with anger over Nielsen’s decision to delay the introduction of its planned out-of-home (OOH) measurement. Nielsen execs spent this afternoon calling media companies with the news that the new ratings measurement would not debut in September, as expected. The measurement company did not give a revised start date, telling one network that it could be ready by January. In its conversations with network execs, Nielsen cited the pandemic as a main reason for the delay.

Obviously networks were going to be upset by this; they’ve sold ads for sports with the expectation of an out-of-home boost, and going back to advertisers right now is not something that any network wants to do. However, as Ourand notes, execs are claiming that it’s the surprise factor that’s most upsetting:

The reason for the networks’ anger: Multiple execs told me that they felt blindsided by the decision, which Nielsen will formally announce later this week. Execs from several networks had no clue that such a delay was even an option — even though they had spoken regularly with Nielsen over the past several weeks.

Another reason for the networks’ anger: The implications of Nielsen’s decision on the ad sales business are enormous, especially considering the NFL season is slated to begin in just six weeks. The decision especially hurts broadcast networks, all of which had been selling ads this fall based on the new measurement.

Acting surprised is certainly something; the NFL is coming up and bars being closed entirely again across the country seems more than plausible, which would render out-of-home models fairly useless. Obviously networks probably deserved more of a heads-up, but surely this couldn’t have been completely unexpected.

Ourand also reports that cable networks are at less of a disadvantage as they hadn’t bundled the out-of-home measures into one number for their ad sales:

Some cable networks, like ESPN, are not impacted as harshly because it had been selling the out-of-home measurement separately, based on Nielsen’s old tech.

We’ll have to see how networks adjust, but there’s a chance that if sports do return, a captive audience will be so happy to watch that the traditional ratings will make up for the loss of any boost. But that’s a rosy scenario, and one that isn’t likely to help a network suddenly on their way back to the negotiating table right now.

Update: A Nielsen spokesperson provided the following statement on this to AA:

The COVID-19 pandemic has had a far reaching effect on the media industry and on consumer viewing habits.  Throughout this crisis, out-of-home audiences have been particularly hard hit, with estimates falling by as much as 60%. This is driven by broad stay-at-home orders, significant reduction in travel, closures of restaurants and public gathering establishments, and other situations that have reduced exposure to television content outside of the home.  The recent surge in COVID-19 cases is expected to create further volatility in this space, making it challenging for the industry to plan around this audience segment.

In consideration of the impact the pandemic has had on out-of-home audiences, Nielsen has decided to postpone the integration of PPM measured out-of-home viewing into the National TV currency.  Nielsen will continue to offer its existing standalone out-of-home reporting service to subscribing clients, many of whom have used the service to transact on out-of-home audiences since 2017. In recent days, several states have started to pause their reopening and local governments are considering the reimplementation of stay-at-home orders.  With future uncertainty around how the pandemic will further impact out-of-home viewing, Fall 2020 is not the ideal time to integrate this measurement into currency.  While a new implementation date has not been determined, Nielsen is prepared to complete the integration when appropriate and will reassess the situation in Q1 2021.