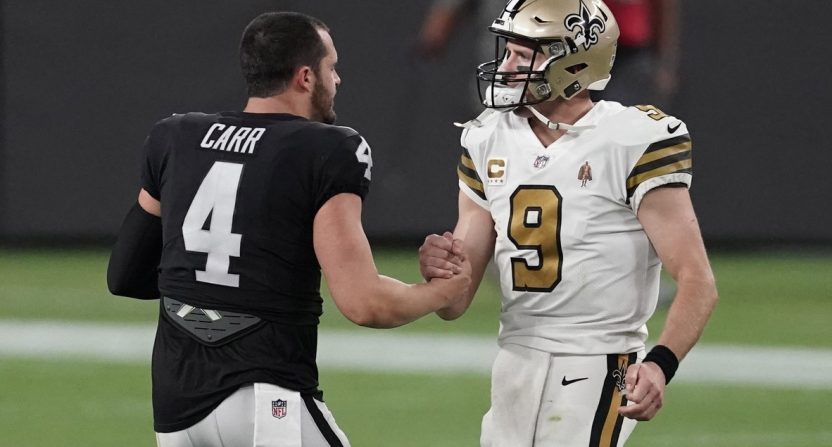 Week 2 of the 2020 NFL season is in the books, and all but one of the league’s TV partners can breathe easy.

Following an increase for Thursday Night Football’s NFL Network premiere last week, Fox Sports saw its weekly viewership rise for the second straight week, while ESPN and NBC also recorded increases. CBS, on the other hand, got pounded in their doubleheader.

We’ll start with the bad. CBS drew just 9.75 million viewers, per ShowBuzz Daily, for its early window on Sunday. The early game for most of the country was either Giants-Bears or Broncos-Steelers, and much like last week, no one in New York gave a shit about their local teams. According to John Ourand of the Sports Business Journal, the Giants drew a 7.4 rating in New York for their loss to the Bears, and the Jets (also playing in the early window, albeit on Fox) drew just a 3.9 rating for their loss to the 49ers. Combined, that’s less than a million people in the country’s largest market watching the NFL in the league’s early window. Not great, Bob!

Last year, CBS only had a singleheader, and the window (Chiefs-Raiders and Patriots-Dolphins) drew 15.24 million viewers, per Sports Media Watch.

The late half of the window was also a disappointment. With most of the country getting Chiefs-Chargers, that window drew 18.87 million viewers.

Fox’s singleheader, in comparison, did quite well. The window, with Falcons-Cowboys, the aforementioned 49ers-Jets, and Washington-Arizona (late) going to most of the country, drew 16.87 million viewers. Last year, Fox had the doubleheader in Week 2, and the early window (Cowboys-Redskins to half the country) drew 16.09 million viewers. The late window (Saints-Rams) drew a whopping 23.34 million viewers. This marks Fox’s second increase of the season in as many weeks, while CBS has declined in both weeks.

Sunday Night Football also saw a rise, but that increase was so small that you might as well just call it flat. Patriots-Seahawks drew 17.69 million viewers on NBC, up a hair over Eagles-Falcons a year ago (17.64 million viewers). As I’ve said before – any increase is only a good thing, but with such a high-profile matchup this year and a lower profile matchup a year ago, NBC was probably hoping for a stronger increase.

And then, there is Monday Night Football, which aired on four networks (ESPN, ESPN2, ESPN Deportes, and ABC) this week. Via ShowBuzz Daily, Monday’s game between the Raiders and Saints drew 7.45 million on ESPN and another 7.98 million on ABC, while viewership for the ESPN2 Megacast feed was not immediately available. The cable and broadcast simulcast’s total of 15.43 million viewers was up 31% from last year’s game, which drew 11.8 million viewers and aired only on ESPN.

What’s on tap for Week 3? TNF has Dolphins-Jaguars, which doesn’t seem very appealing, but will be comped to a Titans-Jaguars game last year that didn’t even draw 6.5 million viewers. Fox has your doubleheader this week, and America’s Game of the Week in the late window is Cowboys-Seahawks. In the early window, Fox’s best game is Rams-Bills, and CBS has a couple of good games in Raiders-Patriots and Texans-Steelers. The New York market seems poised to once again bring laughable numbers to the table, with 49ers-Giants on Fox early and Jets-Colts on CBS late. In the primetime windows, NBC has Packers-Saints on Sunday, which should do quite well (especially comped to Rams-Browns), and ESPN’s Chiefs-Ravens matchup on Monday night should draw plenty of eyeballs (last year’s game was Bears-Redskins).

18 thoughts on “NFL Week 2 viewership: CBS takes a bath, all other networks rise”