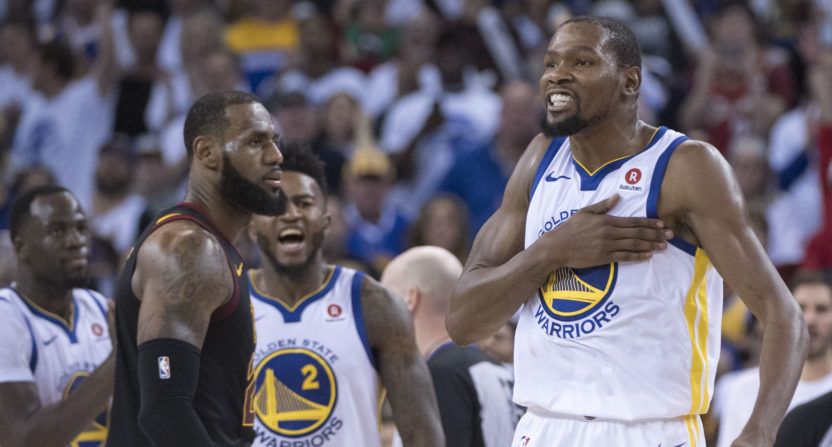 The NBA’s had a lot of good ratings news over the past few years, but the 2016-17 local ratings were an exception, dropping 14 percent overall with 20 of the 27 teams studied seeing decreases. Well, those ratings have bounced back for the 2017-18 season, as per a new report by Sports Business Journal‘s John Ourand and John Lombardo.

While the three percent overall rise is lower than the seven percent boost we saw through February’s All-Star Weekend, which means the local ratings in total are still below where they were in 2015-16, that’s better news than the NHL, where a SBJ analysis of local ratings by Ourand and Ian Thomas for 22 of the 23 U.S.-based teams (data on the Carolina Hurricanes was not available) found a 10 percent year-over-year drop from 2016-17 to 2017-18.

In the NBA (where national ratings also rose by eight percent across ABC, ESPN and TNT, in comparison to a six percent overall decline last year), the defending champion Golden State Warriors posted the league’s best ratings for a third-straight season, but their 8.36 rating on NBC Sports Bay Area was down four percent year over year. The Cleveland Cavaliers (seen facing the Warriors above in a Christmas Day game) were second with a 7.98 rating on Fox Sports Ohio (up eight percent) and the Oklahoma City Thunder were third with a 7.05 rating on Fox Sports Oklahoma (up seven percent).

The biggest increase, 76 percent to a 2.63, came from Minnesota Timberwolves’ games on FS North; the Timberwolves improved from 31-51 to 47-35 and made the playoffs (albeit in the season’s final game), snapping a NBA-leading 13-season postseason drought in the process. The next-biggest came from a 44 percent jump for the Boston Celtics on NBC Sports New England, up to 3.24, with the Philadelphia 76ers’ run to their first playoff berth since 2011-12 producing the third-biggest increase for NBC Sports Philadelphia (up 40 percent to 2.44).

In the NHL (where the regular season rose four percent on NBC alone but fell 12 percent overall), the defending Stanley Cup champion Pittsburgh Penguins posted the best local market rating, a 5.81; Pittsburgh previously held the best local ratings title from through 2009-10 through 2014-15, but the Buffalo Sabres took that mantle the past two years.

However, the Penguins’ ratings on AT&T SportsNet Pittsburgh dropped two percent year over year despite their 47-29-6 record. And the Sabres’ ratings on MSG really plummeted: the team was 33-37-12 in 2016-17 and missed the playoffs for the sixth-straight season, but slumped even further to 25-45-12 this season and saw a 26 percent drop along the way. Their 4.62 was still second-best in the NHL, though, followed by the St. Louis Blues (3.93 on Fox Sports Midwest, down five percent) and the Minneapolis Wild (3.43 on Fox Sports North, down 22 percent).

The worst NHL local ratings (as is often the case) involved a lot of teams in decently-sized but not hockey-obsessed markets. That would be the Anaheim Ducks (a 0.24 on Fox Sports Prime Ticket, up seven percent), the Florida Panthers (a 0.27 on Fox Sports Florida, down two percent), the Arizona Coyotes (a 0.35 on Fox Sports Arizona, down 17 percent), the New York Islanders (0.39 on MSG+, up 21 percent) and the Los Angeles Kings (0.54 on Fox Sports West, up one percent).

Some other established hockey markets took major hits from their teams not contending, with the Chicago Blackhawks and Detroit Red Wings posting their lowest numbers in 10 and 12 seasons respectively. Meanwhile, the Nashville Predators capitalized on their run to the Stanley Cup Final as an eighth seed last year, posting a league-leading 163 percent growth on Fox Sports South (to a 2.1), followed by the Dallas Stars’ 88 percent gain on Fox Sports Southwest (to a 0.71) and the Colorado Avalanche’s 79 percent gain on Altitude (to a 1.07).

What’s all this mean? Well, for the NBA, it’s probably reassuring to see the local markets at least somewhat bounce back, even if not by a ton, and to see them follow the national trend of rising ratings. And in that league, it’s pretty clear that many of the top teams are drawing exceptionally well, but the league-wide local ratings are held back by the few people watching terrible teams.

In the NHL, the local ratings slide is a bit concerning, especially mixed with a national slide, but part of the reason why likely has to do with the Olympics; that’s prime sporting competition during February, usually a valuable month for the league, and the decision not to send NHL players there not only meant the league didn’t get exposure benefits, it meant its games were going up against Olympic programming. (Including men’s and women’s Olympic hockey).

But the other notable news in the NHL comes from the specific markets. Top teams can do well here, as the Penguins showed, and good on-ice results can lead to more tuning in, as the Predators showed, but many of those other results are less specifically correlated with wins than they are in other sports, as two of the top four local ratings (Buffalo and St. Louis) came for non-playoff teams, and two of the bottom five (Anaheim and Los Angeles) came for playoff teams.

So there are some markets where it seems it’s always going to be hard for the NHL to post major local ratings, even with reasonably successful teams, and while those markets are big enough that even a small rating is a decent amount of viewers, those ratings still aren’t great. We’ll see if things rebound for the NHL league-wide next season, when they don’t have to worry about the Olympics.