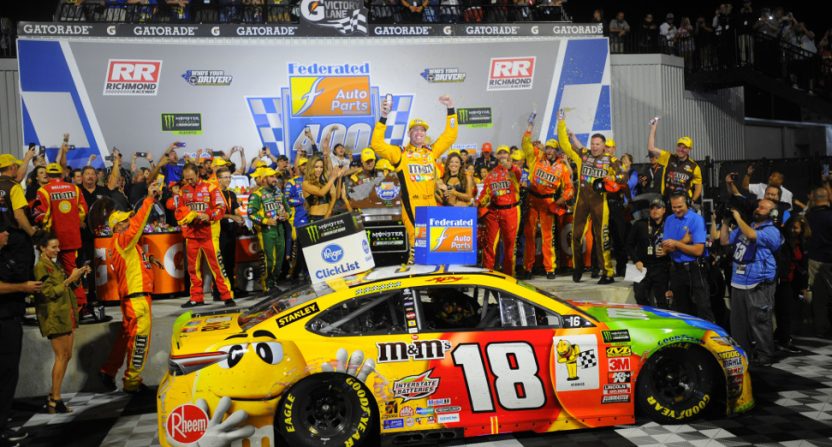 The NASCAR TV ratings have been in free fall for the past couple of years (for example, Fox’s NASCAR viewership fell 19 percent overall this year for their first-half coverage, and fell to levels 29 percent below 2016), but Saturday may have provided a new low. The Monster Energy NASCAR Cup Series Federated Auto Parts 400 playoff race at Richmond saw some exciting on-track action, with Kyle Busch winning despite starting from the back (thanks to damage sustained in qualifying), but the viewers weren’t there.

As per Paulsen of Sports Media Watch, this race on NBCSN saw not only a massive 17 percent decline from last year in ratings (a 1.0) and viewership (1.77 million), but the worst rating for any Cup Series race since at least 2000. And that’s only the latest data point in a troubling trend:

More races have had less than a 1.5 rating this season than in the previous 17 seasons combined.

As recently as 2014 — the last year of NASCAR’s previous television deal — not a single Cup Series race had less than a 2.3 rating or 3.6 million viewers. Fewer than half of this season’s races have managed to match or surpass those marks.

And there are problems beyond that, and one big one is aging viewers. A Sports Business Journal study last year found NASCAR TV audiences in 2016 had an average age of 58, a remarkable plus-nine since 2006 (the highest among the sports studied) and the third-highest average age of sports studied (behind only golf and men’s tennis), and the age gap doesn’t seem to have improved much since then. Paulsen writes that this race averaged only a 0.15 in adults 18-34, behind such highlights as a 3 AM edition of NFL Matchup on ESPN (0.17). So, not bringing in viewers at all is a big problem, and not bringing in younger viewers makes that worse.

Oh, and there are the sponsorship issues, which saw even defending champions Furniture Row Racing announce earlier this month they’ll have to shut down. Despite that, though, new NASCAR president Steve Phelps (formerly the COO, elevated to president this week) doesn’t seem all that aware that there are big problems out there, insisting in July (back when he was still COO and chief marketing officer) that any issues were the fault of unnecessarily negative media coverage:

“I think this industry tends to focus on the negative,” Phelps said at a sponsorship announcement. “I’m not really sure why.”

…”It’s a lot sexier to talk about a Lowe’s or a 5-hour Energy leaving,” Phelps said. “Somehow, the dozen companies that come into this sport are not talked about as much. It’s kind of how this industry works. I would like to see the industry be positive because there are so many positive things going on.”

It’s worth noting that the dozen companies that came in weren’t providing as much money as the ones that left. So that’s not just media negativity. Oh, and in comments there, Phelps talked about turning the ratings around too:

“Our digital and social numbers are very robust and growing,” Phelps said. “We’re going to put a lot of effort into seeing if we can get these ratings turned around and in a positive direction. We’ve seen a bunch of overnights in the last three or four weeks that are moving in the right direction. That said, we have a lot of work to do.”

With TV numbers like these, it may be even more work than Phelps admitted. But hey, at least he’s still optimistic:

“Brands come to NASCAR because of the size and loyalty of our fan base,” Phelps said. “From a business standpoint, it is the single best thing about NASCAR. We have more Fortune 500 and Fortune 100 companies partnering with us than anyone, and that’s because of our great fans.”

…“From our drivers, our teams, our race cars, there’s no other sport like it, and our fans recognize that,” Phelps said. “We need to tell those stories, and give the fans an experience they deserve through rich, engaging content.”

We’ll see how well they do that, and if that will help them turn the ratings around.