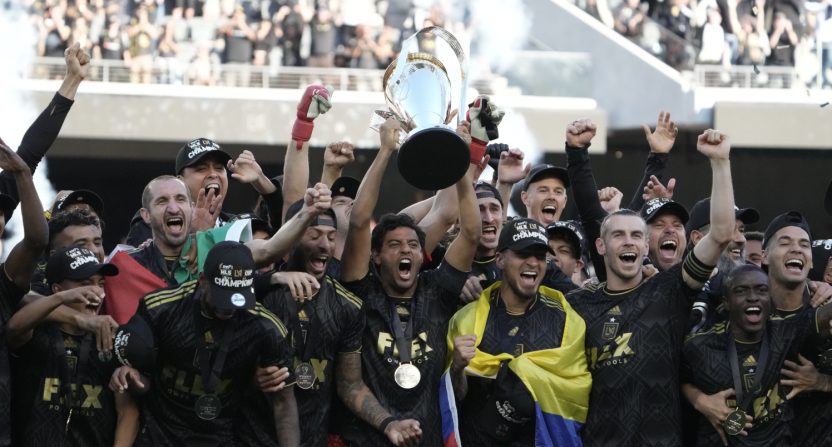 Saturday’s thrilling MLS Cup saw LAFC beat the Philadelphia Union, winning 3-0 on penalties after a 3-3 score through regulation and extra time. That game was wild, especially in extra time. And it led to impressive ratings, including the second-highest number in MLS Cup history for combined English- and Spanish-language audiences, behind only 2.22 million for the 1997 D.C. United-Colorado Rapids match. Here’s more on that from Steven Goff of The Washington Post:

Viewership numbers for MLS Cup starting to roll in …

As Jonathan Tannenwald of The Philadelphia Inquirer noted, a strong local rating in Philadelphia was a big part of that English-language audience on Fox:

Another key #MLSCup TV viewership stat, perhaps the most important one for my audience:

Philadelphia was the No. 1 local market for Fox’s broadcast with a 4.78 rating, nearly tripling everyone else.

That’s notable, as Philadelphia is the current No. 4 TV designated market area by Nielsen. (And Los Angeles is No. 2, so this was a battle of big markets.) As per a fall 2022 Nielsen release, the Philadelphia TV DMA was estimated to have 7,219,100 persons 12+ (larger than the radio DMA considering a metro population of 4,749,300 persons 12+, and larger than the city population of 1,603,797, as TV DMAs in particular go well beyond the metro population). Meanwhile, the Los Angeles TV DMA by that list has an estimated 15,587,700 persons 12+, so that helped juice the ratings also. And as per that Nielsen release, the Los Angeles radio DMA had an estimated 11,234,700 persons 12+ overall, with an estimated 4,829,300 of those Hispanic, so Los Angeles was likely a strong contributor to Univision’s numbers here.

It’s also worth mentioning that this game went long and had a thrilling conclusion. Audience tune-in tends to increase late, especially for close games, and this certainly was that. LAFC keeper Maxime Crépeau was sent off after a 116th-minute collision with Cory Burke of the Union, with that collision also leading to a broken leg for Crépeau, who will now miss playing for Canada at the World Cup. That led to LAFC backup John McCarthy coming in, and while he was beaten by Jack Elliott in the 124th minute (the fourth minute of stoppage time following the extra time period), LAFC substitute Gareth Bale tied things up with a header in the 128th minute. That sent the game to a shootout, where McCarthy made three saves and LAFC won 3-0, leading to the celebration seen at top. And a whole lot of people saw it, even against strong college football competition (including Tennessee-Georgia, which drew 13.1 million on CBS).

The big numbers here come amidst some uncertainty on the future of MLS on linear TV. The league begins a 10-year global deal for all matches (both nationally and regionally) with Apple TV next year, with some games set to be available in the base Apple TV app, some more available through AppleTV+ subscriptions, and some more requiring a separate subscription to a MLS-specific product. The $2.5 billion deal (which could be even higher; it’s structured as Apple guaranteeing MLS $250 million a year, but also a percentage of subscriptions if subscriptions cross a certain threshold) will likely bring MLS more revenue, but just how much more depends on the production costs. And a lot of the details there still are yet to be revealed, though, and a key one is sublicensing of matches by linear networks; Fox, ESPN, and Univision have all reportedly been in talks with Apple about that, but nothing’s been resolved yet. Strong MLS Cup numbers certainly won’t hurt linear networks’ interest in the league, though.