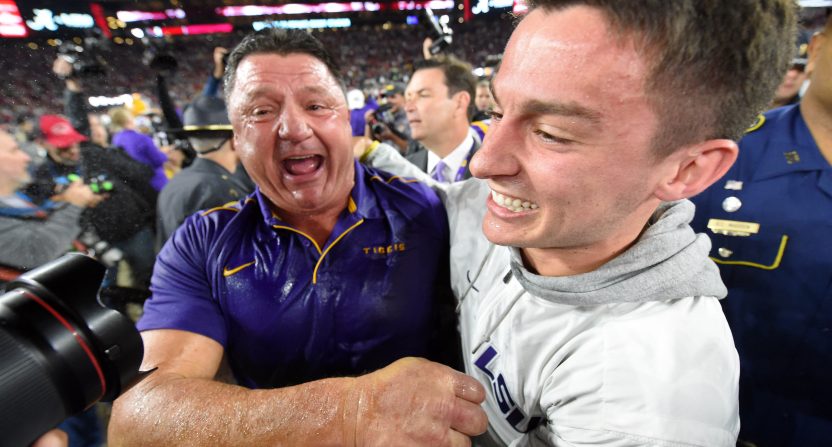 For the first time since 2010, the SEC football showdown between the LSU Tigers and Alabama Crimson Tide wasn’t in primetime this season. Instead, CBS made the decision to move its premiere SEC matchup to 3:30 p.m. Eastern. The decision was less about the rivalry not having “the cachet it used to,” as ESPN’s Paul Finebaum said earlier in the year and more to do with a gentleman’s agreement CBS had with ESPN over primetime scheduling.

Whatever the reasons and whatever the context, it’s clear that the end result was well worth the switch as the battle between the top-ranked behemoths brought CBS the highest-rated regular-season college football game (not including conference championships) in eight years.

LSU – Alabama averaged a 9.7 rating and 16.64 million viewers, according to Nielsen. That would make it not only the highest-rated game of this year but the second-most-watched regular-season college football game since 2011, which was coincidentally the last time LSU played Alabama in a No. 1 vs. No. 2 matchup.

It’s a big turnaround from 2017 when the annual LSU – Alabama game pulled in its lowest ratings in over a decade. The game’s ratings rebounded in 2018 in spite of an Alabama blowout. Of course, the allure of a No. 1 vs. No. 2 matchup, the excitement factor of seeing the game in sunlight for once, and the fact that it was an exciting, high-scoring affair made for a surefire victory for the network.

The primetime game that initially bumped LSU – Alabama to the afternoon was the Notre Dame – Georgia contest from September 21, which had garnered CBS 9.349 million viewers at the time. That gives CBS the two highest-rated and most-watched games of the season so far on any network. They also have four of the top six broadcasts of the 2019 season so far.

To say the SEC continues to pay dividends for CBS would be an understatement. This marks the third consecutive week that their afternoon SEC game was the highest-rated game of the week (Auburn-LSU on Oct. 26, Georgia-Florida on Nov. 2). It also raises CBS’ college football broadcast average to 7.09 million viewers, up 39 percent from last year and the highest it’s been at this point in the season since 1990.

All of which is to say that Paul Finebaum’s comments from June seem silly and his comments from October about the decision to move LSU – Alabama out of primetime seem completely out of touch.

The Nov. 9 LSU-Alabama game would have been a better primetime choice, he said, as he pointed to the narrative that this is the best LSU team in recent memory with the chance to beat Alabama.

“This LSU team is different. They’re the most exciting LSU team I can ever remember,” Finebaum said. “You make your chops in this business by making the right call, and CBS blew it. They’re sitting there right now with the game of the year, one of the biggest games in the 10 years, and they could have had it in primetime as the biggest game of the college football season and it’s literally buried at 2:30 (Central Time) in the afternoon with 4,000 other games on.”

If these are the numbers CBS gets for a “buried” college football game, imagine what’s coming for Alabama vs. Auburn and the SEC Championship.

Next week, CBS gets the Georgia Bulldogs vs. Auburn Tigers in the afternoon timeslot. That’s certainly not the same as LSU – Alabama, but it’s still a critical game for two Top 15 teams jockeying for position in the SEC. Obviously, they won’t see the rating numbers they saw this week, but you can expect their dominance on the charts to continue all the same.