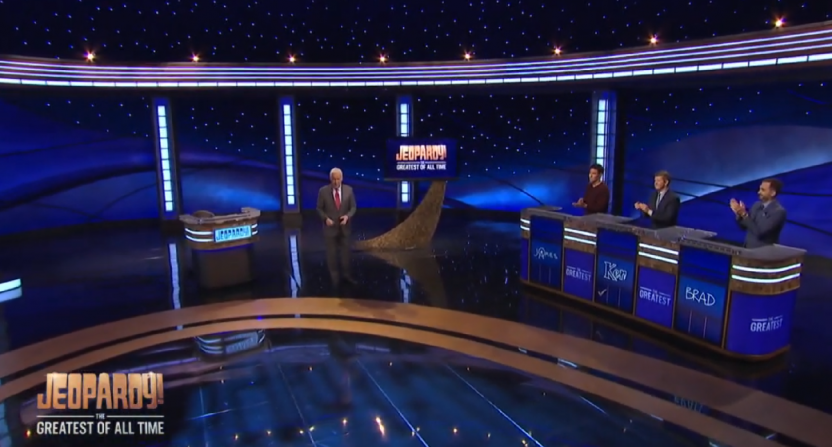 The first three nights of the Jeopardy: The Greatest of All Time event have been very entertaining, with at least one more coming on Tuesday. (The “first to three wins” format allows for up to seven nights total, although at this point a maximum of five nights looks most likely. Sorry, Brad.)

As a television event, it’s drawing in some very strong numbers for ABC, averaging around 15 million viewers before accounting for delayed viewing, making it one of the most successful shows of the season so far. Jeopardy! sits between sports and entertainment programming, but no matter which sector you compare it to, GOAT is performing incredibly well. Rick Porter broke down the numbers for The Hollywood Reporter:

The Greatest of All Time has grown its audience each night it has aired so far: 14.42 million for its debut on Jan. 7, 14.87 million the next night and 15.55 million for round three. The competition featuring Jeopardy hall of famers Ken Jennings, James Holzhauer and Brad Rutter will air at least one more time, on Tuesday; the tournament ends when one player notches three nightly wins.

Those three episodes rank second, third and fourth among all entertainment programs so far this season in viewers. Only NBC’s Golden Globes broadcast, with 18.32 million viewers, currently ranks ahead of it.

The sports comparisons are even more striking, although as Porter notes as well, it’s more difficult to sustain ratings/viewers for a longer broadcast:

As for entertainment programming, the Jeopardy stunt’s same-day average of 14.95 million viewers is currently running 32 percent — and more than 3.6 million viewers — ahead of the next most-watched show, CBS’ NCIS at 11.33 million. It’s also the top non-sports show in adults 18-49 with a 2.3 rating, 15 percent ahead of The Masked Singer’s 2.0.

It has been four years since any non-sports program averaged as many same-day viewers as The Greatest of All Time is now. NCIS (16.6 million) and The Big Bang Theory (15.2 million) did so in the 2015-16 season.

Why is it doing so well? A few factors, including foremost the overall popularity of regular Jeopardy!. From THR:

The big numbers for the primetime tournament also shouldn’t come as a huge surprise, given how popular the regular, syndicated version of the show is. Over the last two months of 2019, Jeopardy averaged 9.8 million viewers each week, peaking at 11.38 million in mid-November with the final rounds of the annual Tournament of Champions (which Holzhauer won).

The Jeopardy! format is honed to a machine, at this point, and the pace of play in these matches has been incredible. The timing works out well, without much primetime competition in mid-January. There’s also the fact that Jennings coming back to face off with Holzhauer pits the show’s two household names (well, definitely household for Jennings, and Holzhauer’s record-breaking run was just last spring. Finally, a lot of people might be tuning in knowing that Alex Trebek might not have another signature spotlight. Trebek, 79, has been battling pancreatic cancer. If anything, the show feels as crisp as ever, and this run is a great spotlight for his abilities as one of televisions greatest hosts, game show or otherwise.

Tuesday night’s fourth match is an elimination game, of sorts, so it’s possible we’ll see even higher numbers this week.