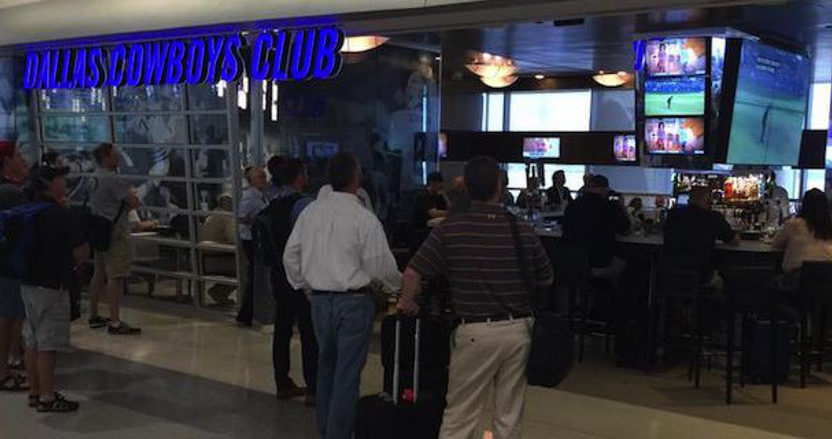 There’s been a lot of buzz about Nielsen starting to track out-of-home ratings data, which ESPN and Fox have both signed up for (after long advocating for it), and those ratings may wind up having even more of an effect than eventually thought. In a new Sports Business Journal column, John Ourand shares some ratings data from both broadcasters, including Fox gaining a 40 percent boost (13.6 million viewers) for last year’s Cowboys-Redskins Thanksgiving Day game that shows just how much of a viewership lift these out-of-home audiences can provide.

What’s perhaps most interesting about Ourand’s piece is he goes beyond how that will impact ad prices (as we’ve previously discussed, those might not increase linearly; advertisers will argue that some out-of-home viewing is already priced in and that some out-of-home viewing is less attentive) to discuss what it might mean for network scheduling patterns, especially when it comes to holding big-ticket events on Friday nights. For those nights in particular, it makes a massive difference to networks if they’re able to count those watching at bars, restaurants, gyms, hotels, others’ houses and so on:

So far, most out-of-home stories in the press have focused on sales — and with good reason. Everyone wants to know how this change will affect revenue.

But if these out-of-home numbers stand, they will have a big impact in how executives program their channels. Traditionally, networks try to avoid Friday and Saturday nights, as fewer people stay home and watch television on those nights.

“There’s a path to Friday prime time being just as dominated by sports as Saturday prime time is right now,” [Fox Sports executive vice president of research, league operations and strategy Mike] Mulvihill said. “But we’re going to have to go through this out-of-home transition to get there and really take full advantage of that night.”

So, if out-of-home viewing really does bring in consistent ratings lifts, and if the ad rates rise at a decent level despite advertisers’ objections, playoff and big-game scheduling could change substantially. (Heck, this might even make something like New Year’s Eve college football more feasible.) Something else that might help raise out-of-home’s viewing importance is just who’s watching. Both Mulvihill and ESPN VP (advertising and marketing intelligence) Kelly Johnson told Ourand that the demographics are good in terms of what advertisers want, with younger and more affluent viewers, plus more female viewers and more viewers from different ethnic groups. That might help overcome some of the skepticism from advertisers. 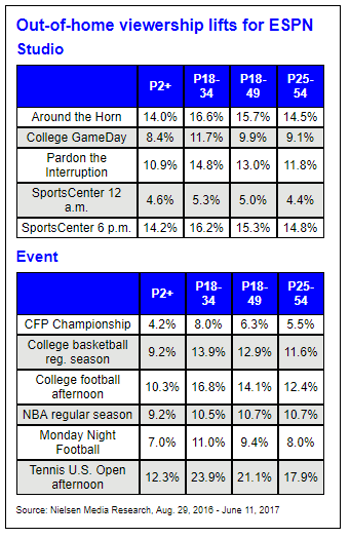 It’s also notable that while the lifts aren’t all as high as that 40 per cent (for Fox’s Thanksgiving Cowboys-Redskins game and ESPN’s Christmas Day NBA games), there have been significant boosts for a wide variety of programming. Back in 2016 while this was still only being tested for certain events, Fox cited a 30 percent boost for a U.S.-Colombia Copa America Centenario match (which rose 62 per cent in the 18-to-34 demographic), and ESPN cited a 17 percent boost for its NFL playoff game, nine percent for college football, and six percent for SportsCenter. In October 2015, ESPN rose seven percent overall in the 18-49 demographic with out-of-home viewing. And now, ESPN’s reporting nice gains for both studio and event programming, as per the chart at right from Ourand’s piece.

There are some caveats to keep in mind with this, of course. One is how the PPM system used to measure out of home ratings actually works; it’s a pager-sized device Nielsen panel members carry around, and it works by picking up audio signals, so there’s no need to log anything. However, that means that it doesn’t count active viewing in a bar or gym where the sound isn’t on, and it does count if you’re in a restaurant and not watching a game that happens to have sound on. Another is the advertisers’ argument that some level of out-of-home viewing was always priced into ad rates even before it was tracked; it’s not like the world suddenly discovered that bars and gyms show sports. Moreover, not all the networks are fully on board with this yet (it’s just ESPN and Fox at the moment; NBC and CBS haven’t signed on, but are evaluating, while NFL Network sounds more interested in joining).

However, these kinds of numbers are excellent news for the networks, and excellent news for sports programming (which makes up a significant portion of out-of-home viewing; a Enseo report on hotel smart TVs found ESPN as the third-most-watched option, behind only default channel NBC and Netflix). They’re also coming at the right time, especially when NFL and NBA regular numbers haven’t been great. Adding in significant numbers of out-of-home viewers could change the conversation about “declining ratings,” even if the numbers of those watching in-home aren’t as impressive. We’ll see how this all plays out, but it certainly appears that out-of-home viewing is going to be an important part of the sports TV landscape in the coming years.