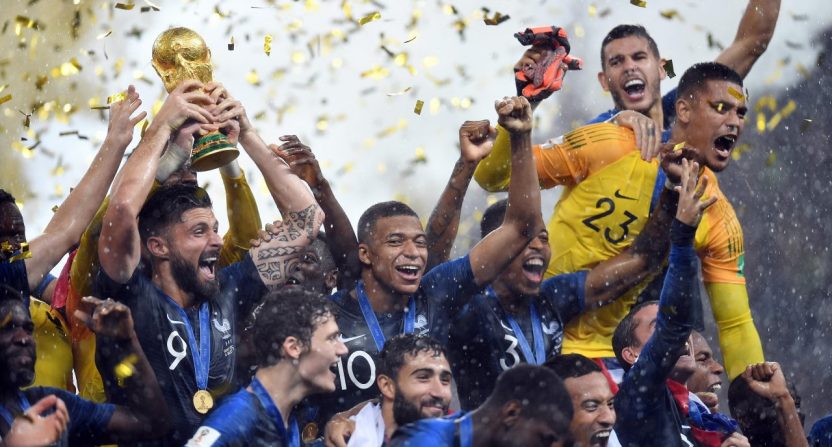 FIFA has never been known for their integrity. The organization in charge of global soccer has been embroiled in scandals and accusations for a very long time now, and only recently have they begun facing actual consequences for (a small portion of) their actions.

But not everything FIFA does wrong is on the same level as, say, being cool with human rights violations in order to hold a World Cup in Qatar for which a bunch of FIFA executives may have received massive kickbacks. Sometimes their transgressions are much simpler, although still bold. Take, for instance, their release on World Cup viewership, which bears an incredible headline:

More than half the world watched record-breaking 2018 World Cup

FIFA has today published the key findings of a comprehensive audit of consolidated final audience data for the 2018 FIFA World Cup Russia™, which was broadcast live in every territory around the world from 14 June to 15 July this year.

A combined 3.572 billion viewers – more than half of the global population aged four and over – tuned in to world football’s ultimate competition, according to audience data for official broadcast coverage of the 2018 FIFA World Cup.

The global in-home TV audience watching at least one minute of coverage totalled 3.262 billion, while a further estimated 309.7 million people watched no coverage in home but caught the action on digital platforms, in public viewing areas or in bars and restaurants, boosting the total audience by 9.5 per cent.

It’s one thing for official press releases to find a way to stretch ratings data to suit a network’s (or a league’s) needs. We see it every week when someone needs to try to make it look like ratings were actually better than they were last year for the same event, even if they weren’t. It becomes a game of spin. But FIFA isn’t adding arbitrary endpoints or omitting key information, they’re outright claiming that half of humanity watched the World Cup.

Even if we drop the standards for “watching” to include catching a glimpse of a group stage match as they walked down the street, that number still seems incredibly inflated. You can read the whole report if you want, although the font choice is seemingly another line of defense to keep people from looking past the initial release. It’s not much better, although it does list the supposed methodology:

Yes, that is worth noting! If you’re wondering who compiled the report, it’s from Publicis Media, an advertising and PR firm. One of the biggest, in fact, and far from an independent authority. The issue, though, is what these numbers get used for. FIFA touts things like this as gospel, and eventually it sort of just gets accepted, leading to a snowball effect of sponsors and rights deals. And again, they’re saying that literally half the world watched the World Cup. That’s an absurd statement.

In just the United States last year, 103 million people watched the Super Bowl, a little under 1/3rd of the national population. And that’s in just one country, which has made that one game into a borderline national holiday, and where access to television is unparalleled. And FIFA wants us to believe that the participation rate increases when we expand to a global audience.

Yes, there are other factors. There’s more than one game, it’s a month long, more countries are involved, etc. But FIFA isn’t selling us on half of the world catching a few minutes of a Group C match in a bar and then checking out. And even if they were, again, they’re selling us based on a report filled with estimates they paid for from a PR firm. Let’s not just run with the half the world thing, please.