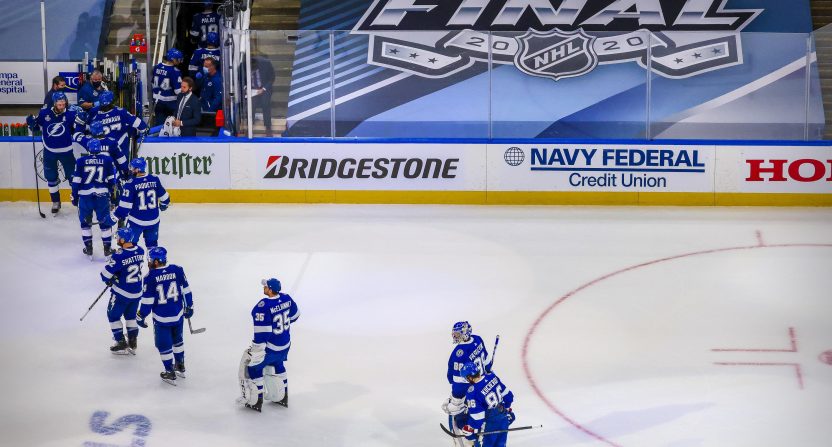 The NHL’s playoffs usually take place in April, May, and June, with its only major live sports competition consisting of regular season MLB games and NBA playoff games. With that lack of competition, it’s somewhat easier for the league to gain a foothold and draw in viewers.

But this year, it’s been different with the pandemic wreaking havoc on schedules across all sports. The NHL’s playoffs are now taking place across the months of August and September, and that live competition includes not only its usual competitors, but also the two juggernauts of the American sports landscape in September – college football and the NFL.

With playoff games also taking place in the middle of weekdays, there’s also going to be a natural drop in reach for those games. Despite all those caveats, it’s stunning to see the overall drop in NHL playoff viewership for the first three rounds.

Per Sports Media Watch, the NHL averaged just 844,000 viewers for its playoff games in rounds before the Stanley Cup Final. Not only is that a 28% drop from a year ago, it’s the lowest since NBC’s networks began airing all playoff games as part of the NHL’s TV deal with the network that started in 2012. Of the 11 conference final games, just one (Game 4 of Golden Knights-Stars) saw an increase from 2019 – and that was a game that aired on NBC as opposed to NBCSN (which the comparable game did a year ago). That matchup was the most-watched of the round, with a paltry 1.68 million viewers.

The trend was not reversed for the start of the Stanley Cup Final on Saturday. Game 1 of Stars-Lightning series drew a jarring 2.12 million viewers (on NBC!) Saturday night, per ShowBuzz Daily. That finished fourth among the six live sports contests airing in primetime on Saturday, ahead of just an MLB on Fox national window and a Louisiana Tech-Southern Miss college football game on ESPN2. Game 3 of the Celtics-Heat Eastern Conference Finals on ESPN, Miami-Louisville on ABC, and the NASCAR race from Bristol on NBCSN all topped the NHL on NBC Saturday night.

I go back to Paulsen at Sports Media Watch for some context. This year’s Game 1 is the least-watched Cup Final game since Game 4 of Devils-Kings way back in 2012, which aired on NBC. It’s the third-least watched Final game on broadcast TV since 2000, ahead of Game 3 of the 2007 Senators-Ducks series and Game 3 of the 2004 Lightning-Flames series. Game 2 of the series didn’t fare any better – it averaged 1.14 million viewers, though it aired on NBCSN rather than NBC proper.

Incredibly, Game 1’s viewership still made it the second-most watched NHL playoff game this season, behind just Game 7 of the Islanders-Flyers series, which drew 2.96 million viewers thanks to a lead-in from the Kentucky Derby.

The (somewhat) good news for the NHL is that Games 3 and 4 will air on Wednesday and Friday this week, without any football competition aside from Middle Tennessee-UTSA on CBS Sports Network Friday night. The bad news it that those two games will go up against Games 4 and 5 of the Celtics-Heat series on ESPN, which handled the NHL nicely during Game 1.

The bad news? Game 5 will again air on Saturday night, against not only a potential Game 5 of the Lakers-Nuggets series, but also a raft of college football, including Alabama-Missouri on ESPN and Florida State-Miami on ABC. A Game 6 (if needed) will be up against the dynamic Ravens-Chiefs Monday Night Football matchup, and both Games 6 and 7 (again, if necessary) will be head to head with potential Games 6 and 7 of the Lakers-Nuggets series.

Needless to say, there haven’t been many positive notes for the NHL on the TV ratings viewership front since the restart. I guess they’ll just have to make do with their wildly successful dual bubble implementation in Canada.