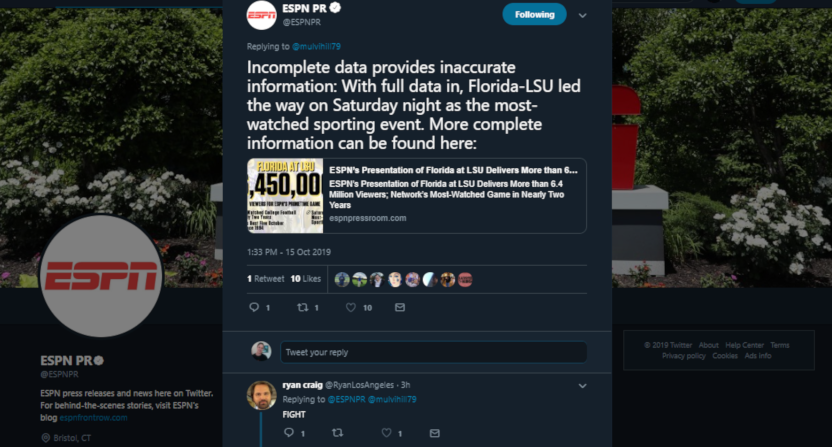 Any discussion of sports ratings needs to take into account that there are a whole lot of different “Nielsen ratings” generated in different ways, and that the two ratings most commonly used for sports (“overnights” and “finals”) carry dramatic differences. Those differences are exacerbated this year thanks to Nielsen changes, which include Nielsen counting out-of-home viewing in overnights but not finals and overnight numbers dropping to 44 metered markets from 56 (finals are national), and that’s led to wider network pushback against releasing overnights at all (a movement that’s been underway for a while, but has gained traction thanks to these changes). And that led to a remarkably dramatic ESPN PR tweet at Fox Sports executive vice president Michael Mulvihill Tuesday.

When it comes to college football in particular, Fox has continued to put out overnights information this season, while ESPN has held off on releasing numbers until finals. And that created some highly unusual drama Tuesday; the unbylined “ESPN PR” Twitter account calling a tweet from Mulvihill (Fox Sports’ EVP/head of strategy, and one of the few actual executives who regularly discusses ratings) “inaccurate information,” because that tweet said Fox’s ALCS coverage beat Florida-LSU based on overnights and the finals told a different story. Here’s that exchange:

It’s understandable why ESPN wants to trumpet the ratings success they found with No. 7 Florida at No. 5 LSU (which, by the way, they only got thanks to CBS punting on that matchup to take No. 1 Alabama-No. 24 Texas A&M; amazingly, ESPN wound up outdrawing the CBS game, with 6,450,000 average viewers to 6,108,000 in overnights despite being in 35,000,000 less homes), as that game provided legitimate records for them. It was one of ESPN’s five best October college football telecasts since 1994, and it was their most-watched regular-season college football broadcast of any kind in almost two years. (It was still well behind Fox’s Oklahoma-Texas broadcast, which pulled in 7,252,000 viewers in finals, but some of that is about the broadcast/cable divide.) And they’re even fine to say that Florida-LSU “led the way on Saturday night as the most-watched sporting event”; that’s only true for finals, but finals are the more important metric at this point, so this is a much less dubious claim than, say, “Michael Kay beats Mike Francesa (if you count Kay’s streaming numbers and ignore Francesa’s).”

But while the Florida-LSU numbers are actually impressive, it’s highly unusual to see them lead to a public shot at a rival network executive. And that’s particularly true considering that the executive’s tweet in question was days-old and was based on the best information available at the time. If Mulvihill was still trumpeting that Fox beat ESPN, this would be more understandable, but he wasn’t. And it’s especially odd to see this shot coming from the unbylined ESPNPR account rather than the individual account of one of ESPN’s many PR staffers. And it’s even stranger still to see that come with the tagline of “inaccurate information,” as that term as an indication of what’s actually going on here is disputed, to say the least.

Yes, the finals are probably the better number to use now that they’re in (although there’s still some debate about that, especially considering that overnights are now counting OOH viewing and finals are not yet counting that). And the overnight changes this year may have particularly underrated this game, as New Orleans (#50) was previously counted in overnights, but now isn’t. And it’s understandable why ESPN wants to say that their CFB game beat the MLB game in finals. But the numbers Mulvihill relayed were not “inaccurate”; they were an accurate representation of a particular set of data, which was all that was available at the time.

ESPN can very well choose to continue to not discuss overnights if they want to, but that doesn’t mean that reports based on overnight data are “inaccurate.” And for observers like us, it’s very much appreciated that Fox and Mulvihill are choosing to continue to relay overnight information. Yes, overnights come with caveats and can change in finals, but they’re not “inaccurate”; they’re a reflection of the available data at a certain point, and they provide a look at how things did long before the finals come out. Going after a rival network executive for “incomplete data” and “inaccurate information” based on him accurately relaying overnights is an odd strategy, and it’s odder still to see that come from @ESPNPR rather than any of their individual PR staffers.