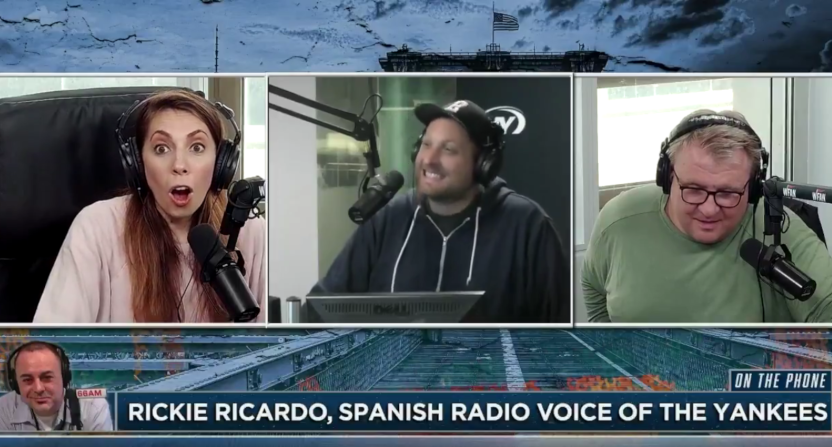 Yankees’ radio broadcaster John Sterling has a colleague to thank for help getting out of the floods (from the remnants of Hurricane Ida) in the New York area Wednesday night. Rickie Ricardo, the Yankees’ Spanish-language play-by-play voice since 2014, spoke to WFAN’s “Moose and Maggie” (Marc Malusis and Maggie Gray) Thursday about how he wound up helping Sterling out of a stuck car that was filling up with water:

Our own @RR_RicardoFAN is a hero? Indeed, he told @MandMWFAN on today's #OutToLunch how he rescued a stranded John Sterling after last night's Yankees game. pic.twitter.com/KRkCKWUa3N

Here’s a transcription of Ricardo’s comments there:

“Usually when we finish a game, John Sterling is the first one to leave. He does the totals, the wrap-up, and he and his engineer, they go. I stick around because I do the Spanish postgame, so I’m the last one to leave the stadium. First, it was amazing to see the lobby at Yankee Stadium completely flooded. I’m talking about water above your ankles in the Yankee Stadium lobby at Gate 2. I’d never seen anything like that.”

“We get into our cars, and the streets around the stadium are closed, so it takes me a good 20 minutes just to get over the Macombs Dam Bridge, because I’m going to Jersey, so I’m trying to find the GW [George Washington] Bridge. I go into Upper Manhattan, and I’m trying to go down 158th maybe to get to the West Side Highway, all of that is flooded. All of it’s flooded.”

“I’ve got to turn around, and I figure, ‘Okay, I’ve got to find high ground.’ And high ground would be Broadway. So I figure, ‘Okay, I’ll go Broadway, I’ll go slow,’ because Broadway’s flooded. And I’ve got a Jeep, so I’m pretty high. So I’m going up Broadway, I finally get to the GW, and it’s spooky. The power’s out, it’s all dark. So I go across the GW, but my phone rings, and it’s Suzyn. And Suzyn asks ‘Where are you?’ I say ‘Well, I’m working my way across upper Manhattan to get over to the bridge, to get to Jersey.’ She says ‘John is stuck on River Road in Edgewater.'”

“Well, I’ve seen for years how flooded it gets on River Road in Edgewater. And with the kind of rain we had last night, I could only imagine. So I say ‘Okay, Suzyn, I’m on my way, I know where he lives, I’ll figure out where he’s at and see what I can do.’ So I get over the bridge, I call John, I finally get through because the cell service is kind of spotty. But about the 10th try, John answers the phone. I say ‘John, it’s Rickie. Where are you?'”

“So John is trying, in the dark because the lights are out, to describe to me where he’s at. So he’s like ‘I’m in front of this Chinese restaurant on the corner with this bagel shop.’ And he’s in his car. And the water’s rising. So in my mind’s eye, I’m trying to figure out where he is. So I say ‘Okay, John, stay with me here on the phone. I’m over the bridge, I’m coming down River Road, I’m coming down slowly because I don’t want to get stuck, but hang in there, buddy, I’m coming to get you.’ So I finally get down where he’s at; there’s a marina in Edgewater, and it’s an intersection where, at least, guys, there are 25 cars stranded in all different directions. I don’t know how people spin around in all different directions, it’s amazing.”

“I pull up and John is like ‘Is that you?’ and I’m like ‘Yeah, I’m flashing my lights, I’m now behind you. I’m as close as I can get.’ Because his wheels are completely covered in water. Water in the cabin. So I get as close as I can to him, I say ‘John, let me help you out.’ I rolled up my pant legs, I said ‘Make sure you take your registration with you.’ John gets out, I wade with him through the water, I get him into my Jeep, I finally get him settled into my Jeep, and he’s kind of shell-shocked, and I don’t blame him.”

“The adventure is to get the extra half mile from where he was stranded to his apartment, which is no more than about half a mile. It took us about an hour. Courtesy of directions from the Fort Lee, North Bergen, and Edgewater police departments, who were very, very nice, every time there was a road closure. But every time I thought ‘Oh, I’ll go this way,’ ‘Nope, that road’s closed!’ ‘I’ll go this way,’ ‘Now that road’s closed.’ It was a jigsaw puzzle. I finally got John home, wet, about an hour and a half, maybe two hours after the game ended.”

Ricardo then told Moose and Maggie he didn’t get home until an hour later.

“By the time I dropped John off at his building, I live about a mile from John, and that took me another hour. It was about 1:15 in the morning.”

With Thursday being a Yankees’ off-day, Ricardo was hoping to fly to Florida early that morning to visit family, but his flight kept getting pushed due to Newark Airport flooding, then was eventually canceled. So he didn’t get to sleep until after 4 a.m. himself. But he certainly wound up making a difference for Sterling.