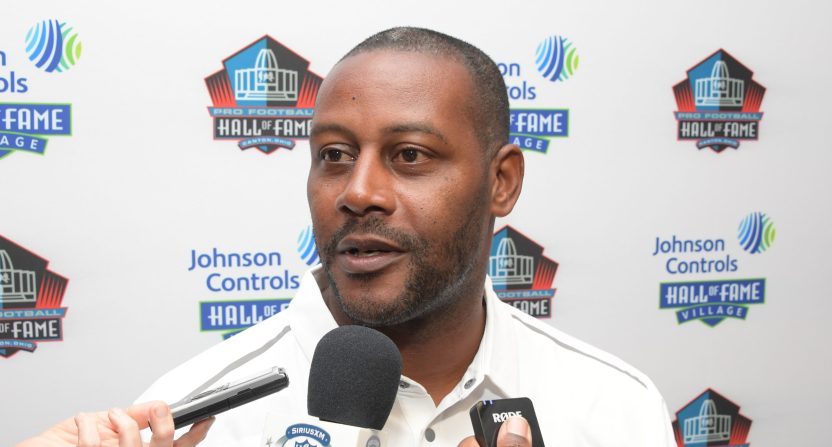 Normally, radio guests don’t like to add degrees of difficulty to their live appearances. But for former New England Patriots star Ty Law, balancing good content with the encroaching threat of coyotes is just part of the process.

The Pro Football Hall of Famer appeared on WEEI’s The Greg Hill Show on Tuesday morning to discuss the state of the Patriots when he admitted that he was “out here in LA right now walking around with my head of a swivel. You know, the coyotes are out so I always keep that head on a swivel.” While that might have just sounded like a jokey anecdote about life in modern Los Angeles, it soon became apparent that Law was being extremely literal.

When Hill said that Law “could absolutely outrun a coyote,” Law corrected him by saying “that is absolutely false, Greg.” Hill then rolled into a question about Mac Jones and the boos he’s received from Patriots fans. Law started to provide his opinion when, all of a sudden, the audio cuts out and we return to hear Law saying “hold on, hold on” as he runs to get away from an animal. Presumably, the audio was cut due to Law sharing a well-earned expletive.

Ty Law calls in from the woods and gets chased by a coyote live on the radio! https://t.co/QvY3Y7H8DI

“This is going viral,” says one of the WEEI hosts as Law gathers himself.

“Did he get away?”, WEEI host Courtney Cox asked.

“Yeah, oh yeah. I still got a bit on me,” Law responded. “I’m sorry CoCo I had to gather myself. Where we at? Where we at? I’m around the corner now.”

“Is the thing stalking you?,” Hill asked.

“No. I’m telling you, they be out here. I don’t know if that was a wolfdog, somebody’s Alaskan Malamute, or if it was a goddamn coyote,” Law admitted. “You all got me tripping on air right now. That one woke me up right there, guys. It’s 5:00 in the morning and I’m awake now.”

“I feel like you should seek shelter somewhere, Ty,” Hill later responded.

“I’m good, guys. You know it’s bad when you’ve got a golf club in your hand and you’re still running,” Law said. “I ain’t gonna run up on him. But back to these Patriots…”

From there, the interview got back on track and Ty Law lived to do another radio spot another day.