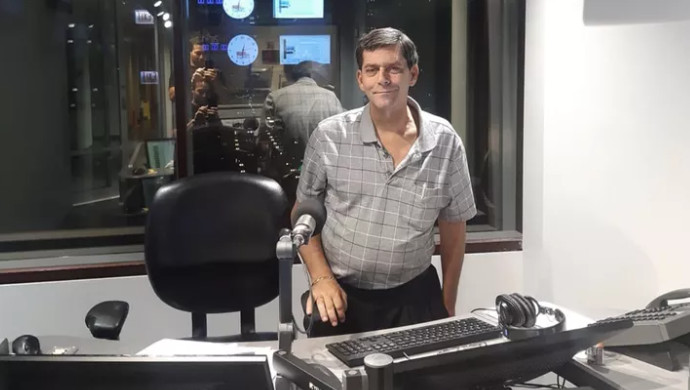 Sports radio has lost a famed Chicago voice. That would be Les Grobstein, a figure on several stations in the area for over 50 years and a regular overnight host for 670 The Score since 2009. As Chicago media reporter Robert Feder wrote in the first link above, Grobstein was found dead Sunday afternoon at his home in Elk Grove Village, as per 670 The Score program director Mitch Rosen. Grobstein’s family is raising money for his funeral expenses on GoFundMe here. Paul Sullivan of The Chicago Tribune has some more on what made Grobstein a key local sports figure:

Les Grobstein was the keeper of “the tape,” and if you had to ask, “What tape?” you didn’t know Les.

For the uninitiated, “the tape” was the profanity-laden postgame interview with former Chicago Cubs manager Lee Elia, which Grobstein recorded for his radio station and helped turn into one of the most famous stories in local sports lore.

…Grobstein spent more than 50 years reporting and commenting on the Chicago sports scene and was in press boxes in his final days. Just last month at a Loyola-DePaul basketball game, Grobstein was asked the last time the two schools had met in a really “big” game.

“When Ray Meyer was coach,” he said, referring to the late DePaul legend, before going into a long story about the era.

If it was a Chicago sports fact and Grobstein confirmed it, you didn’t have to go to the internet to fact-check. He was that good.

Some of Grobstein’s past work includes time as a stringer phoning in scores and quotes to the Associated Press and local TV stations, time as a reporter for WLS 980, Tributes to Grobstein have poured in on Twitter, including ones from Northwestern coach Pat Fitzgerald, Bulls’ radio voice (and long-time Chicago radio figure) Chuck Swirsky, and many others:

Les Grobstein was one of the few absolute constants in my life as a Chicago sports fan. His recall and passion for the games, players and coaches were unmatched. He was 1-of-1. RIP my friend. pic.twitter.com/tGXPB5G0LS

I love reading all the wonderful tributes celebrating the life of Les Grobstein. He deserves every one of them. He left an indelible mark that will never be replicated.

The first year of my Score career was spent as the overnight producer. I grew up a Steve & Garry fan, so the idea of working with Les Grobstein was a dream. I had a lot of ideas & energy. Les let me explore them. How he treated me was the template for how I treat producers.

Les Grobstein was one of a kind, full of so much kindness, countless stories and far too many one-liners. He genuinely loved every interaction, whether it was with a friend or Score Overnight caller.

I’ll miss a buddy who was always uniquely himself. What a life and legacy. pic.twitter.com/IXLlZrYuBr

As Lee Elia once said, 85 percent of the world worked and the other bleeping 15 percent watched day baseball at Wrigley Field. But there was only one Les Grobstein, who did both. #RIPGrobber https://t.co/GYWzNNuG6D

Les Grobstein was one of a kind. His photographic memories about Chicago sports is unmatched. From pxp to overnight sports talk, to local/national reporter, Les hustled. He worked his ass off. It was my pleasure being your teammate earlier in my career. #RIPGrobber pic.twitter.com/tqBSAOX2Yk

The best description of Les Grobstein I heard came from @ChrisRongey who simply said “there’s no one like Les, and we need to appreciate him.” Sad day for his family, friends, listeners and our colleagues.

I never thought Les Grobstein could die. He was a constant; a living emblem of a slowly fading brand of radio. I treasured when we got to share air together; his experiences & stories were endless. He will be missed not just by the station, but by the city, and by the industry.

Incredibly sad news that longtime friend and colleague Les Grobstein has passed away. Les was a Chicago institution. A million stories will be told about Les in the coming days but I’ll always remember him as a friend who would always offer help when needed. Rest In Peace

This is a very special edition as we remember the life of Les Grobstein with @Schumouse and my wonderful producer TJ Rives @BucsSidelineGuy. A great listen. Season 4 begins Wednesday featuring the legendary @North2North. https://t.co/sVsnjg7wk6https://t.co/qJvH8QUzfj pic.twitter.com/D1gXpA8G4O

Statement from the Chicago Bears on the passing of Les Grobstein: pic.twitter.com/eM8CrFB5Dc

For those looking to help the Grobstein family (Les’ long-time partner Kathy and son Scott) with funeral costs, that fundraiser is here.