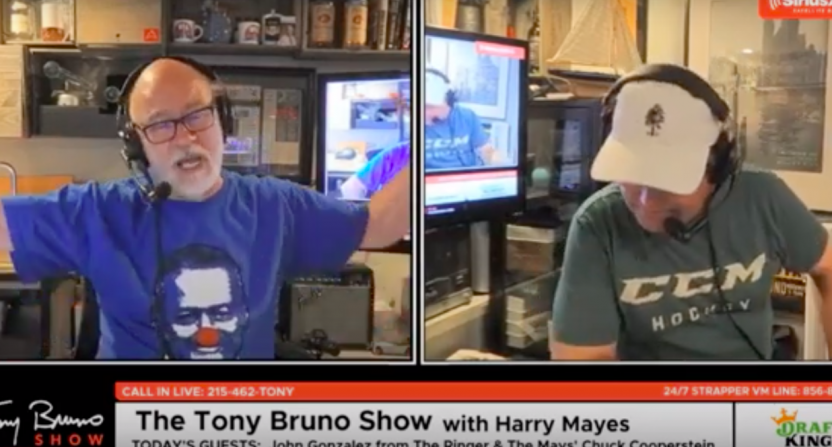 It’s hard to deny that Tony Bruno is one of the pioneers of what we’d consider the national sports talk radio model. He was one of the original radio hosts for both ESPN Radio and Fox Sports Radio. In 2006, he moved to Sporting News Radio where his show appeared on XM Satelite Radio as well. His Los Angeles-based show Into The Night with Tony Bruno was eventually syndicated across the Fox Sports Radio network until 2011.

After a stint in Philadelphia, a requisite podcast, and a brief retirement, Bruno returned to SiriusXM this past April with The Tony Bruno Show with Harry Mayes, airing weekdays from 3-6 p.m. on the Dan Patrick Radio channel.

As we all know, you don’t last long in sports talk radio without some #HotTakes and Bruno was always ready to serve some up. And Bruno’s takes got him in trouble on more than one occasion. In 2011, he referred to San Francisco Giants pitcher Ramon Ramirez as an “illegal alien” in a deleted tweet and was suspended for it. In 2018, in response to reports of a mass shooting in Florida, he made a rather insensitive tweet conflating it with a Madden video game tournament in the same city. And a recent tour of his Twitterfeed is basically what you might expect it to be.

Like so many older sports talk radio hosts of his ilk, unless you’re part of Bruno’s built-in audience, you probably haven’t heard much of his show in recent years. So you might have even been surprised to know he had a show right now at all. “Had” is the operative word as Bruno’s show was canceled by both SiriusXM and SportsMap this week following comments he’d made on the air and a dustup with New Deadspin.

Crossing Broad has the details. Our saga begins on August 24’s show when Bruno brought up a meme involving LeBron James and how he only reads the first page of a book he’s photographed with, the implication being that LeBron is lying when he claims to have read books like the Malcolm X one he recently showed reporters. There’s already a dubious racial undertone to the meme and, intended or not, it’s hard not to feel it as Bruno and his co-hosts discuss, with Bruno calling it a “scam” before a commercial break.

When they come back, Bruno starts in on a diatribe about LeBron James and his support of Black Lives Matter. And that’s where things really go downhill.

“LeBron’s not focused on the game right now. He’s talking about the situation that went on with the police shooting over the weekend. He only talks about the lives he thinks matter, but other lives don’t matter. That’s why I despise LeBron James and I despise the NBA. And they’re committing their own professional suicide because…there are a lot of people who agree with them, but there are a lot of people who are tired of this.”

Mayes seems to try to steer the conversation back to what happens on the court, though it’s clear he shares Bruno’s assessment of the situation. Bruno then digs in by making the wild accusation that most NBA players can’t even read (a longstanding racist trope), so why listen to what they have to say?

“I don’t care about the politics of these players…most of these guys can’t even read for God’s sake. You wanna give me lessons on what matters and what’s important?”

On Wednesday, Deadspin’s Thomas Laforgia wrote up the quotes in an article titled “NBA Players Can’t Read,” Idiot Proclaims on Radio.” And while there are many people who have sworn off the new version of Deadspin for many aforementioned reasons, Bruno is apparently still a reader (or at least has a Google Alert for his name). Soon after the article posted, Bruno went on his radio program and, per Barrett Sports Media, countered that assessment:

“I was surprised that Deadspin is still a thing because I thought they went out of business,” Bruno said. “I don’t care what they do, but when you’re gonna come after me with some slipshod hack writer, who’s not even a journalist, whose only job is to go and do hit pieces on people, I’m not going to have someone try to ruin my life and my reputation. They are incompetent and they are criminals.”

“I will do everything in my power to make sure Deadspin is taken care of and brought to justice,” Bruno added.

Strangely, Bruno seemed to have less of a problem with Deadspin reporting what he said than with the grammar style they used to report it.

For the record, Bruno and Deadspin didn’t always have a contentious relationship. Bruno even sat down for an interview with A.J. Daulerio back in 2008. However, relations between the two sides are now as icy as ever. And they won’t get much better now that Bruno’s latest show is officially done, via a statement given to Deadspin.

We are no longer carrying the “Into The Night” program with Tony & Harry. We will be introducing a new program, starting next Tuesday (Sept 8th) entitled “Sports Map All Night” with host Bill Schmid. This was actually something we were contemplating previously, as [with] the start of the NFL season, we wanted live content and interaction across our network.