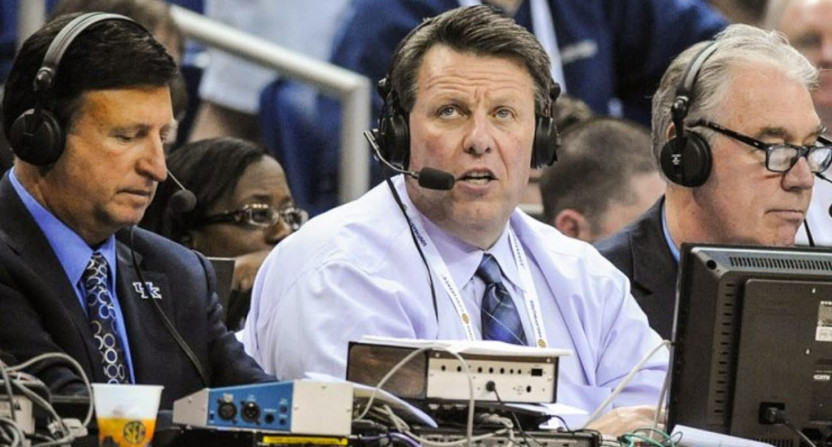 If there is anyone who deserved to sleep in for an entire Monday, it would be him. The longtime radio broadcaster for the Kentucky Wildcats pulled double duty this past weekend. After calling the Wildcats’ football home game Saturday against the top-ranked Georgia Bulldogs, he hopped on a plane the next day to call the Kentucky basketball game against the No. 2 Gonzaga Bulldogs in Spokane, Washington, 2,160 miles away.

Both Kentucky teams took losses, but Leach was the big winner. He felt so normal that he spent Monday afternoon in his office.

“I usually don’t get affected too much by jet lag,” Leach told Awful Announcing. “Unless you have a big intolerance for that, it’s not that big a deal. It’s just a long plane flight.”

This time of year, when the college football and college basketball schedules collide, it’s not that unusual for broadcasters to have to hustle from one venue to another. What is unusual is having to fly across the country between games. Leach, the Voice of the Wildcats for over two decades, has never experienced anything quite like this.

At least for those trips, he had a day off in between. This time, no such luxury. To have a successful weekend, Leach took a school charter flight on Sunday at 9 a.m. Eastern time. Thanks to an on-time departure, he arrived in Spokane with four-and-half hours to spare. After grabbing a quick lunch. a shower and a change of clothes, he headed to the McCarthey Athletic Center.

“That’s not challenging in terms of the workload,” Leach said. “It’s challenging because you don’t have much margin for error with the air travel.”

Leach describes the basketball broadcast as typical, even though the circumstances were not. He said he never experienced fatigue.

“No, it all felt normal,” he said. “I’m lucky. Part of the key is that you get a normal night’s sleep on the front end on Saturday night. Doing games two days in a row with two sports is pretty common these days for a lot of us who are in this business.”

Leach loves this time of year. The 1982 University of Kentucky graduate started working for the UK Radio Network in 1989. After eight years, he was named the play-by-play voice for Kentucky football and started calling games for Kentucky basketball in 2001.

Kentucky has a great history of radio voices, including the legendary Cawood Ledford. Being a part of that tradition is meaningful to Leach.

“It’s what I’ve always wanted to do, as far back as I can remember,” he said.

This basketball season has been different for Leach. In June, his longtime radio partner Mike Pratt died after a long battle with colon cancer. He was 73. A former Kentucky basketball player, Pratt worked as a color analyst alongside Leach for decades.

Leach and Pratt spent 20 years traveling together, having dinners, and hanging out.

“It’s kind of like a relationship of brothers,” Leach said. “I still think about Mike a lot. I miss those conversations and the fun times that we had. But the guy who came into that job is another former Kentucky player. Jack Givens brings a lot of the same qualities that Mike brought to the job. So, it has been an easy transition to work with Jack, who is off to a great start.”

[Top image of Leach from Daniel Hager on YouTube]