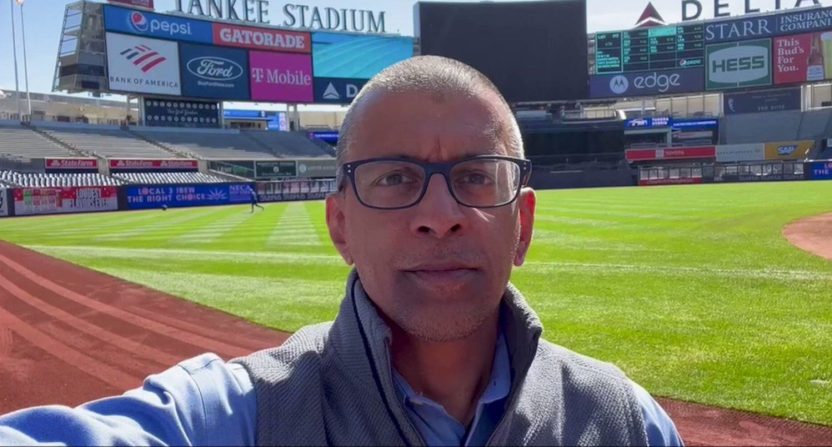 One of WFAN’s longest-tenured voices is moving on. Sweeny Murti joined the famed New York radio station in 1993 after earning a broadcasting journalism degree from Penn State and working in Harrisburg and Philadelphia. He worked for WFAN as a producer and anchor from 1993-2001 (with a short break to go to Philadelphia’s WIP in 1997), then became the station’s Yankees reporter in 2001, a role he’s held since. On Friday, Murti announced his time at WFAN has come to an end:

So I have some news. Today is my last day at WFAN: pic.twitter.com/gGs2BlHmQQ

Murti is quite a prominent figure in the baseball world, and that was seen in many of the tributes that popped up to him:

Wishing nothing but good things for Sweeny, who is both great at his job and a great person, one of the best in the business in every way. https://t.co/cFUx86tDDm

So talented, and even a better person. https://t.co/ltZDJf0xk1

Wow….What a great, great run…Sweeney is one of the guys you look up to in beat reporting and has done it with incredible class.

Was always nice to me whenever we'd run into each other. https://t.co/0iKVgEzIp1

Aw, man, what an incredible run, Sweeny. Best of luck with whatever is next!

You were great, Sweeny. Excited to see what’s next for you!

Sweeny, first and foremost I’m honored to call you a friend and to have forged that friendship when I worked at the other radio station. You did an amazing job at WFAN and you will be missed. Best of luck and all the best to you and your family!

I hate the uncertainty of it all. I have appreciated your work for as long as I can remember.

Damn. You had a hell of a run. Appreciate all the work you did over the years covering the team. Best of luck going forward.

A 30-year run anywhere in media is remarkable, especially in this day and age. And doing so at WFAN, and largely in one prominent role (although Murti dipped into other areas, including even play-by-play), is maybe even more remarkable considering all the various turnover that station has had over the years. Murti had some notable comments to Allie Berube of Harrisburg’s WHTM (an ABC affiliate) last May about how much the Yankees’ role at WFAN meant to him, and how he related to Derek Jeter’s dream of playing for the Yankees:

“In his mind and his heart, he was this little boy who grew up in Michigan wanting to be shortstop for the New York Yankees,” Sweeny said. “I am not comparing myself to Derek Jeter, but I’m going to tell you that I understand and recognize [a similarity]. I was a little boy in Middletown and I now work at the biggest radio station, covering the biggest team, and I’ve done it for over 20 years.

“I don’t need to win any awards or Hall of Fames,” Sweeny continues. “I’m not in the class of Derek Jeter, but I recognize that one little thing of this is what he wanted to do as a little boy and he got to do it.”

But, in that same interview, Murti also discussed surviving the ups and downs of the media business.

“I see the great athletes that I’ve covered say there’s another game tomorrow, can’t get too high, can’t get too low,” Sweeny said of what he’s learned in his time in the business. “So celebrate whatever it is or wallow in whatever it is, and just recognize that there’s something else tomorrow. That’s helped me in this job, that’s helped me in my life.”

It seems highly probable there will be something else tomorrow for Murti, whether that’s in the media world or not. It will be worth watching to see what he does next. Let’s send him off from the station with a replay of his involvement in one of the most memorable moments in WFAN history: