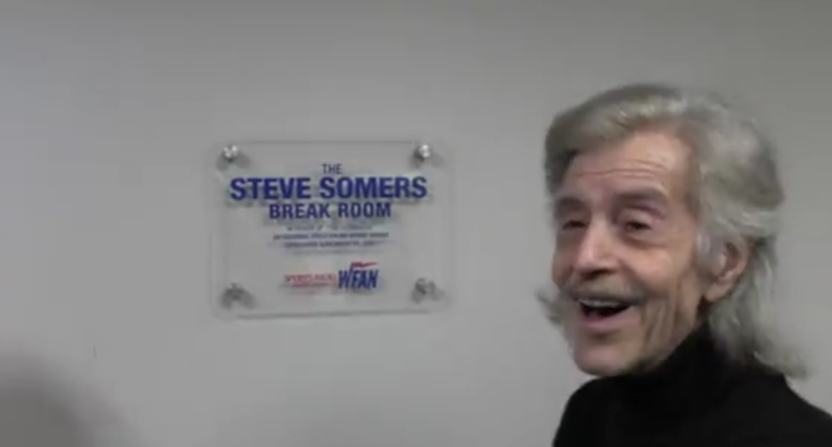 One of the most remarkable recent radio careers comes from Steve Somers, who had been at famed New York City station WFAN since its 1987 launch, starting as the overnight host and moving on to mid-morning and then evening roles. The 74-year-old Somers announced last month that he’d retire from full-time radio work “more sooner than later,” and that came to fruition this weekend; Somers hosted his last regular show Friday, and then he fully said goodbye Monday in a 90-minute special. Somers made an incredible impact on New York sports radio and sports radio in general over his career, from his catchphrases to his “schmoozing,” and that was shown in a lot of the tributes to him Monday. Here are some of those, featuring ESPN Monday Night Football voice Steve Levy (who got his start at WFAN), former WFAN hosts Mike Francesa and Chris “Mad Dog” Russo, and comedy legend Jerry Seinfeld (who regularly called into Somers’ show as “Jerry from Queens”  before a falling-out and then a reunion), via Russ Heltman at Barrett Sports Media:

“I just wanted to thank you for how you treated me when I was so young and knew nothing,” Levy said as he called into Somers’ final hour. “You taught a lot of people about the industry. How to respect your audience, how you treated them, and the last thank you, Steve. You were a piece of the success in the first-ever all-sports radio station in the country.”

….“Yours is a little different because I was gonna still work,” Russo said about his transition from WFAN. “I was just gonna do it in a different venue and look for a new challenge. You’re gonna go into a retirement scenario where you can do whatever you want. You can wake up at 2:00 in the afternoon…go see a movie, you can do anything you want. For the first time in your life, you’re not constrained to a time schedule.

…During his chat with Francesa, the former afternoon king told Somers he was ‘as big a part of it as anyone who has ever stepped through the doors.’ Francesa praised the impact Somers made on the station to which Somers added afterwards ‘I’m surprised Mike didn’t refer to me as a compiler for lasting 34 years.’

…Seinfeld told Somers during their on-air discussion he was one of the greatest sports voices in New York. He then thanked Steve on behalf of all NY sports fans who enjoyed his rhythms, humor, and humanity. Seinfeld concluded by telling Somers ‘Nobody put the work into openings like you did.”

Here’s one of those openings, featuring Seinfeld himself:

And here’s how WFAN hosts Gregg Gianotti and Craig Carton presented Somers with a plaque renaming the station break room in his honor Monday:

And here’s how Somers signed off:

Goodbye, @SteveSomersWFAN: "Too many people to name are responsible for me lasting 34 years. To the people who called in, you gave me a chance, a breath, a life and a career. I hope there comes a time where we meet again. Thank you all very, very much. Bye-bye."

More of the clips from Somers’ final shows are available on WFAN’s site, and Heitman has a fuller transcription of his last day at Barrett Sports Media. Somers will certainly be remembered, and he’ll certainly be missed. A 34-year-run is remarkable at any station, but it’s particularly notable at WFAN given how his time there dated back to the station’s beginnings, and given how many other people have come and gone from that station over the years.  Hopefully Somers will have a great retirement.