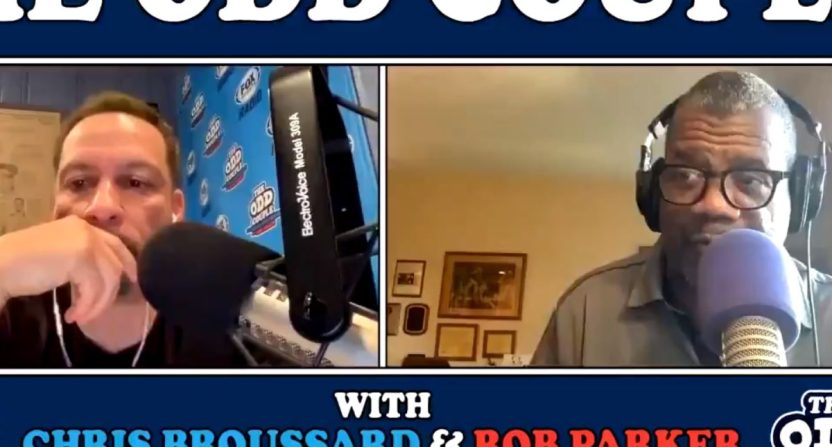 As the NFL remains under fire for alleged racial discrimination within its hiring process for head coaches, Fox Sports Radio host Rob Parker highlighted a similar lack of diversity among the sport’s top broadcasters.

During his Fox Sports Radio show The Odd Couple, co-hosted by Chris Broussard, Parker expanded on an article he wrote for Deadspin titled Discriminatory hiring practices in the NFL aren’t limited to head coaches.

“I got a problem with why there hasn’t been to this point, a Black analyst on a major primetime broadcast,” Parker said.

He acknowledged the Black broadcasters that get opportunities on NFL pregame shows, specifically noting James Brown and Michael Strahan, but Parker went on to explain; “The big paying jobs and the biggest ones have so far not had that guy in there.”

“Other than OJ [Simpson] for those couple of years on Monday Night Football in the ‘80s and I’m not ignoring him, and the cup of coffee and sweet roll that Louis Riddick got and Booger McFarland, other than that we’ve been shut out,” Parker said. “And I’m still waiting for them to pay a Black man $18 million to call 17 football games.”

Tony Romo makes around $18 million per year with CBS, Troy Aikman just landed a deal with ESPN that will pay him in the same range, while play-by-play voice Joe Buck is joining the Monday Night Football booth for $15 million annually.

“I’m not mad at Troy Aikman,” Parker insisted. “You’re worth what someone is willing to pay you.”

But Parker’s biggest issue with the seismic changes within the NFL broadcasting scene was Kirk Herbstreit being hired by Amazon.

“He never played in the NFL,” Parker ranted. “He’s Mr. College Football, and even in that spot, they gave it to somebody who didn’t even play in the league…I know his resume. I’m not saying he’s not qualified, but even that job, Chris! Even that job with Amazon went to another white guy.”

Broussard was less upset over the issue, claiming there are only a handful of these elite high-paying broadcast gigs in the NFL. “There are so many Black men on television calling sports including football.”

Stephen A. Smith was previously the highest paid personality on ESPN, but he’s been superseded by Aikman and Buck. As the face of ESPN, Smith also has a much more grueling schedule than the new Monday Night Football tandem will.

As the merry-go-round of broadcasters continues in the NFL, one premier spot remains open with Fox needing to fill the void left by Aikman on their lead booth. Greg Olsen, Sean Payton, Michael Strahan and even a trade for Drew Brees are scenarios that have been floated to fill Aikman’s seat. Although it’s hard to imagine Fox spending Aikman type money on the opening.