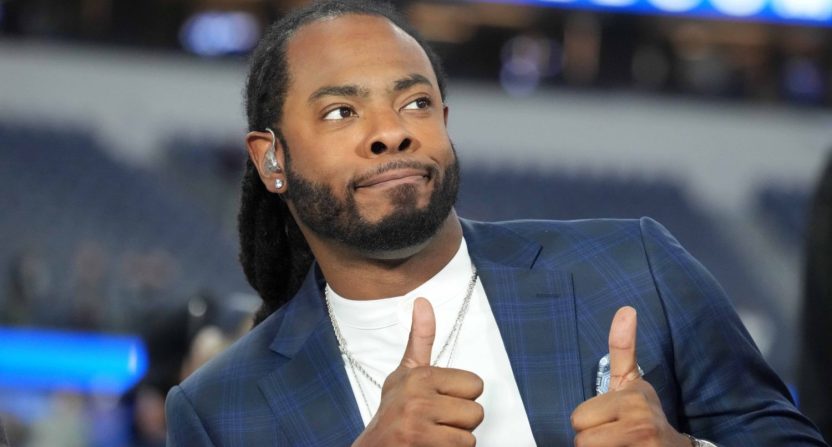 Richard Sherman joined a local sports radio morning show in Seattle this week and the former Seahawks star opened the interview with a cringeworthy exchange.

Every Wednesday on Seattle Sports 710, morning hosts Brock Huard and Mike Salk have retired Seahawks linebacker K.J. Wright on the show. This week, Sherman joined Brock & Salk during Wright’s hour and the guest appearance quickly became awkward. Sherman wasn’t just selective about which questions he wanted to answer on the show, he was selective about who was allowed to ask them. Apparently, Sherman has a major issue with Salk, which came across as news to the radio host.

Salk attempted to begin the interview with a very standard sports radio-style question about Sherman’s various career stops as a player, but the former Seahawk and current Amazon Prime analyst wasn’t interested in hearing from him.

“First off, I remember when I exited here and I remember I heard some words from you that were a lot different than I had heard when I was here,” Sherman told Salk. “I’m gonna answer the questions from Brock and K.J. but we’re gonna excuse you out of this.”

Salk quickly stated the accusation was not true, claiming the things he said about Sherman when he left the Seahawks were very similar to what he was saying about the cornerback when he played in Seattle.

“I don’t listen to your show,” Sherman fired back. And when Salk attempted to respond, Sherman quickly cut him off to reiterate, “Again, you’re excused from the interview.”

“It doesn’t really work that way, Sherm,” Salk said. “This is a show that has my name on it.”

“It kinda does, though,” replied Sherman.

“No, not really how this works man,” Salk continued.

Salk welcomed a conversation about the matter, stating, “if you’ve got an issue, you can feel free to talk about it,” but Sherman remained steadfast that he has no interest in speaking to the Seattle sports radio host.

Sherman didn’t come across great in his latest media feud, while Salk’s radio show can now relish the national attention it’s getting from the incident. Maybe he’s right, maybe Salk was unfair to him in the past, but without bringing receipts, it’s hard to take Sherman’s side on the matter. If Sherman’s plan was to go on a radio show with a host that he has beef with and decline to speak to that host, maybe he should have just declined the invite altogether.