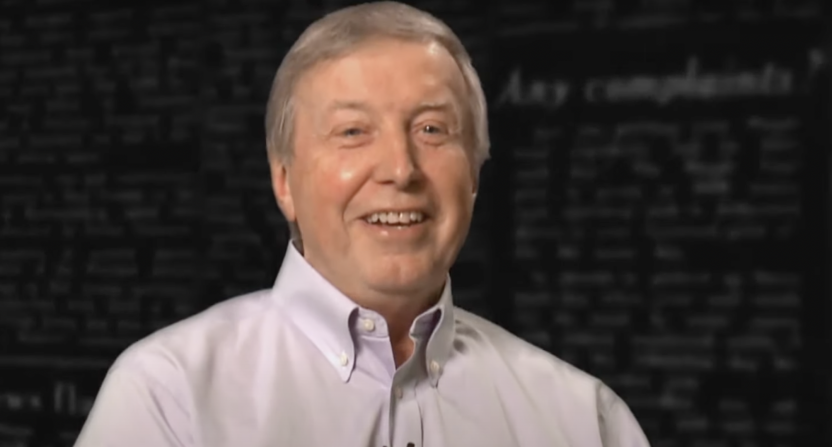 They don’t get much more Philadephia than Ray Didinger. And after 53 years of covering Philadelphia sports as a sportswriter, radio personality, and sports commentator, the Pro Football Hall of Fame media legend is calling it a career.

Didinger announced the news on Sunday during his radio show on 94WIP, saying that when his contract is up at the end of May he will officially retire.

Ray Didinger fights back tears as he announces his retirement: "I just want all of you to know how much I appreciate your friendship and support. It means more to mean than words can ever express." pic.twitter.com/ekNfPyb8cf

“Sunday, May 29th will be my final show,” Didinger said. “I am ready to transition from Ray Didi to grandpop.

“All these years, my family has lived their lives around my schedule. Now I can build my life around theirs. I have a wonderful wife, two accomplished adult children, and four beautiful grandchildren. I’m ready to transition from being Ray Diddy to Grandpop… I love the people I worked with and I’m proud of what we built, but I feel it’s time to go. I’m healthy, I’m happy, but I’m also 75 years old. It’s time. Really. It’s that simple. I’m not being pushed out the door, I’m leaving on my own, but it isn’t easy. I love my life and grew up wanting to be a writer and wanting to be involved in sports, and I’m seeing it all come true.”

Didinger is truly a Philadelphia lifer, having grown up in Delaware County and attending Temple University. He went on to cover the NFL for The Philadelphia Bulletin and The Philadelphia Daily News for over 25 years. He also spent time as an Eagles TV analyst on NBC Sports Philadelphia and as an on-air personality for 94 WIP. Didinger also has seven books to his name, including The Eagles Encyclopedia.

Didinger was named Pennsylvania Sportswriter of the Year five times, had his name added to the writer’s honor roll in the Pro Football Hall Of Fame in 1995, and was inducted into the Philadelphia Sports Hall Of Fame in 2005.

Here’s Didinger discussing what it will mean to Philadelphia if the Eagles won Super Bowl LII, which they did.

As you would imagine, the tributes from Philly sports fans and the sports media world rolled in almost immediately.

Today on SportsRadioWIP, Ray Didinger announced he is retiring after 53 years covering the Philadelphia Eagles.

Ray has been a beloved member of the CSN/NBCSP family since the debut of Eagles Pregame Live in 1998, and we wish him the very best.

Meeting Rose, Schmidt, etc was memorable. Getting to know Ray was life-changing

A sportswriting legend. One of the greatest people ever in our business.

In a town where the sports discourse is almost always insane, Ray Didinger always brought informed perspective. He never had takes. He doesn't even know what chasing clicks means. Just a smart dude who loves and knows sports. We'll miss his unique presence.

Ray Didinger just announced his retirement and he is by far the most beloved sports media member in this city. He and @RealGlenMacnow have by far the best sports talk show going. So sad to see him hang it up but congratulations on a great career!

"The people in Boston didn't even know there was a team in Foxborough until the #Patriots started winning.

Working alongside Ray Didinger at CSN was one of the great experiences of my professional career.

Wishing Ray the best in his retirement.

A legend, a consummate pro, and A+ human being.

We throw “legend” around a lot. Ray Didinger is a legend. I remember us trying to get him on our college radio show and we had to call his house phone because he refused to get a cell phone.