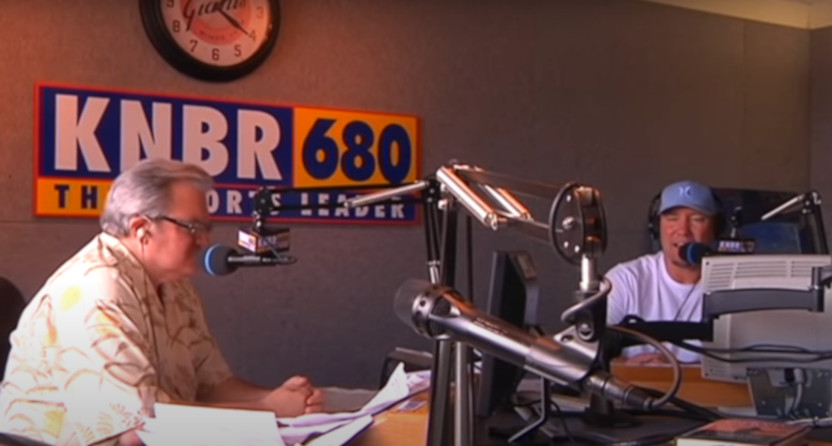 One of the most prominent San Francisco sports radio voices has passed on. Ralph “Razor” Barbieri, who spent 28 years at 680 KNBR before he was fired in 2012, passed away at 74 Monday at his home in nearby Novato following a long battle with Parkinson’s disease. Barbieri, long famed as a strong interviewer who got subjects to say what they meant through repeated questioning, was particularly known for hosting afternoon show “The Razor and Mr. T.” with Tom Tolbert over his final 15 years at the station. (That show is seen above, with Barbieri at left and Tolbert at right.) Daniel Brown of The Athletic had a great piece on Barbieri last April, which would prove to be Barbieri’s final major interview. Here’s more from that piece:

Their old KNBR gig, “The Razor & Mr. T,” was always at or near the top of the ratings and Barbieri recalled those days in his typically understated style.

“It was the best coupling in the history of the world,’’ he said. “We laughed all day long every day. It just flowed from us. We didn’t even need a guest. We were at our best when we were talking to each other.”

Barbieri said his chemistry with Tolbert allowed them to thrive in surprising ways. Incongruously, it showcased how smart the fun-loving jock from Arizona could be and how funny the cynic with an MBA from The Wharton School could be.

“Working with Tom was the most fun I’ve ever had in my life,’’ he said, “and there isn’t even a close second.”

Tolbert has stayed on with KNBR since then, and he currently hosts the afternoon show with Rod Brooks and Larry Kruger. On Monday’s show, Tolbert had quite the tribute for Barbieri:

“He was one of a kind, man,” Tolbert said. “He was special. Him and (Gary) Radnich basically built this station. Those were the two guys, the two mainstays, the two pillars that got this thing going. He was fiercely loyal, loved his family, loved (his son) Tate, loved me, I loved him. It was just so much fun.”

Barbieri started his sports media career with a $3 per hour radio job in Honolulu when he was 33. He went on to write remarkable stories for Sport magazine on Bill Walton and  Bruce Jenner, and then joined KNBR, first as a fill-in, then as an overnight host beginning in 1989, and then as an afternoon drive host, including with Tolbert from 1996-2012. And he helped pave the way for the station’s transition from a sports/news/talk mix to an all-sports format. (Which has been so successful that they even took over famed FM rock station KFOG to use that band as a simulcast feed last summer.)

There was controversy in Barbieri’s departure from the station. He was diagnosed with Parkinson’s disease in 2005, but didn’t disclose that diagnosis to management and listeners until 2011, and then was fired six months later. That led to him filing a discrimination lawsuit, which was settled in 2013.

But while Barbieri’s sports talk career didn’t end on the best note, he still found ways to find joy in life despite the physical challenges from Parkinson’s disease. Barbieri spent the past few years travelling with his son Tayte. and told Brown last year that he’s enjoyed that time, saying “I’ve gone to every place I wanted to go.” It’s good to hear that he was able to find that enjoyment. And he’ll certainly be missed. Here are a few of the Twitter tributes to him Monday:

Ralph Barbieri defined Bay Area sports talk radio for years. He was passionate, he was smart, he was stubborn, he was a helluva listen, he was a tough listen at times. A true piece of Bay Area media history.

Rest in peace, Ralph Barbieri. He made sports talk what it was here in the Bay Area. The interviews with Sabean, his raspy voice – there was no one like him, and there will never be no one like him. The Razor is an absolute legend. Rest easy… pic.twitter.com/xEeBYyntwX

Ralph Barbieri was one of a kind, a must-listen for many years on KNBR, no matter whether you agreed with him or not. And that man could TALK. Truly impressive.

It’s a sad day for all Bay Area sports fans. Ralph made the commute home more tolerable and interesting every single night. RIP to a Bay Area media legend.
https://t.co/unV9RV5WBS

…. go get “Saltamacchia,” mispronouncing his fellow Italian’s name. Sabean, in the highest-pitched voice I ever heard from him, incredulously responded, “SALTAMACCHIA????” We still talk about that. Barbieri was always kind to me when I was on his show. It was appointment radio

I grew up listening to the guy ?.

Loved the way he conducted interviews and his chemistry with @byronjr23 was exceptional.

Barbieri will surely be missed. Our thoughts go out to his friends and family.