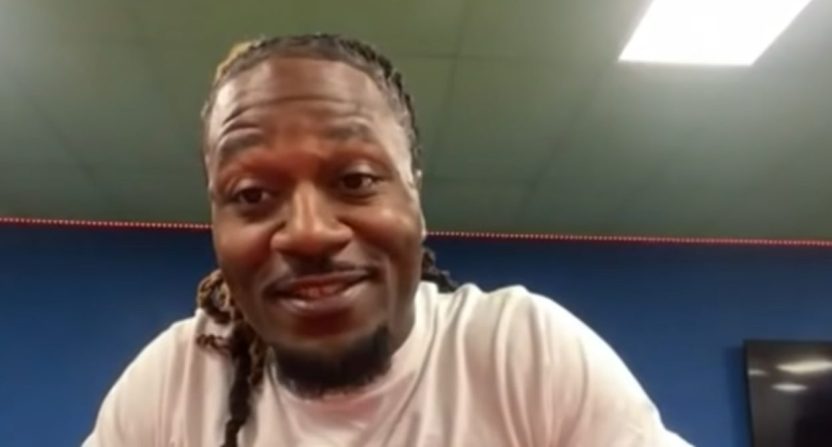 The Backyard Brawl between the Pittsburgh Panthers and the West Virginia Mountaineers returns for the first time in over a decade Thursday night. Much like some players, fans can’t contain their excitement or use of profanity. Even when those fans are former NFL players.

Pittsburgh’s 93.7 The Fan welcomed former NFL cornerback Adam “Pacman” Jones to their morning show Thursday to break down the highly-anticipated matchup. But the West Virginia alum barely lasted three minutes before the station was forced to hang up the phone after exhausting their dump button.

“Ass,” OK, no problem. But a couple of s-bombs paired with one giant f-bomb was too much for the Audacy-owned radio station to handle. Once the dump button ran out of time, The Fan hung up on Jones to avoid risking the wrath of the FCC.

During the brief interview, which did feature great insight into how players feel about the intense rivalry, Jones was asked if he minds being hated by Pittsburgh fans. He was a college rival to Pitt with West Virginia and a NFL rival to the Steelers with the Cincinnati Bengals.

“Man, this was going so well,” said Dunlap. “You know, every time I’ve ever talked to Adam Jones, he was respectful.”

Adam Pacman Jones was just, uh, great on our show.

“I can’t call him back,” Crowely said in a defeated tone.

To his credit, almost immediately after he was hung up on, Jones sent the show an explanation text.

The interview with Jones marked four dump button usages during The Fan Morning Show on Thursday. Two s-bombs and one f-bomb from Jones. Earlier in the show, former Pitt coach Dave Wannstedt chimed in with a “sh*t” of his own. So the expletives are certainly flying ahead of this Backyard Brawl.