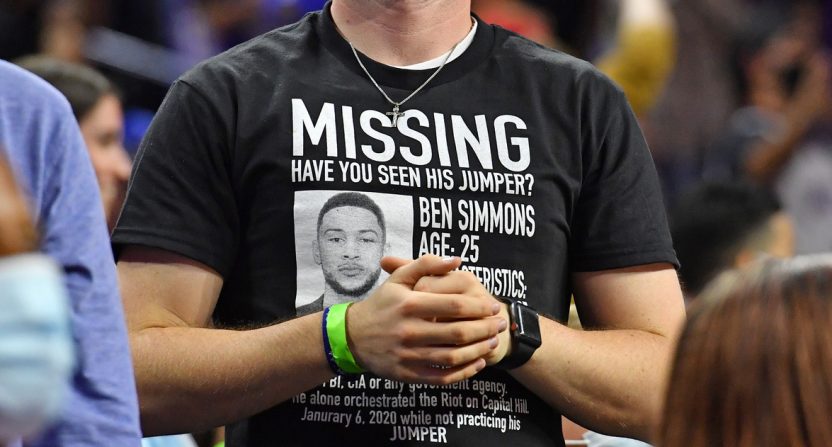 Philadelphia sports fans have a…reputation. And that reputation may be a bit overblown or misleading, but it’s a reputation all the same. And every so often you get a story that confirms whatever it is you already thought about Philadephia’s finest.

This is one of those stories.

The Ben Simmons Saga continues to rage on in Philly as the mercurial star remains out of action due to mental health issues related to his ongoing cold war with the Philadelphia 76ers over whether or not it’s in his best interest to remain with the team. Support for Simmons has waxed and waned in the last few months and as the NBA star’s fortitude to handle Philly has been called into question time and time again. The veracity of Simmons’ claim that he’s dealing with mental health issues that make it hard for him to rejoin the Sixers has been a topic of much discussion in Philly fan and media circles.

You don’t have to live in Philadelphia to know that Simmons remains the hottest of topics on sports talk radio. You probably also don’t have to live there to know the lengths that Philly fans will go to complain about Simmons, too. That includes calling into a radio show in your car, getting hit, and then following through on your complaint rather than trying to get the license plate of the guy who just hit you and drove off.

Via Barrett Sports Media, “James in the northeast” called Angelo Cataldi and the Morning Team on WIP 94.1 on Friday to vent about Ben Simmons and, when asked how he’s doing, casually started by noting that he was “not bad” but that “someone just hit my car,” adding “and they’re driving off. It’s okay. They just swerved into my lane. It’s alright. I’m not worried about it.”

Cataldi and co-hosts Al Morganti and Rhea Hughes tried to make sure James got the license plate number of the driver who hit him and said that they’d “get a lawyer for you.”

“You just got into a car accident, and you’re calling about Ben Simmons?” Cataldi asked.

“Yeah, cuz he annoys me more than someone hitting me with their car and driving off,” James responded. “I wanna talk about how annoying Ben Simmons is because it makes me sick that he is lying about mental health.”

Cataldi really wanted to make sure his caller was okay and aware of the severity of the situation. “Okay, I’m really having a hard time paying attention to the call because you just got hit,” Cataldi said. “I actually heard the contact.”

The host and his team then asked James to stay on hold so they could give him their “winner of the week” prize due to his ability to stay on hold while dealing with a hit-and-run.