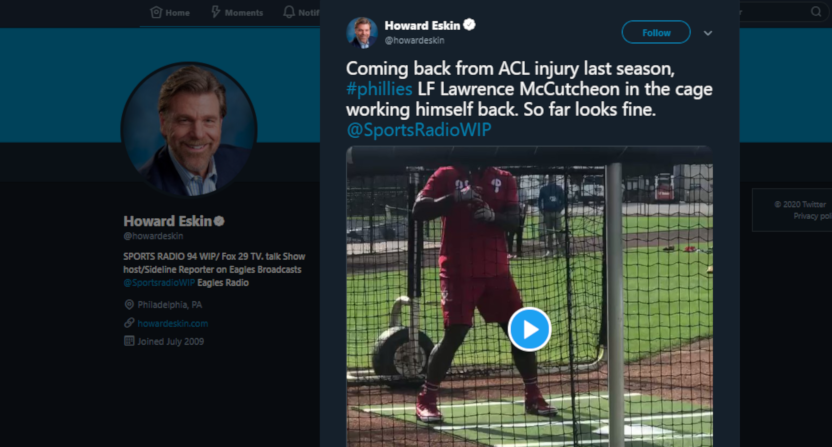 Twitter mistakes happen, but some media figures sure make them more regularly than others, and Howard Eskin (a long-time Philadelphia sports media figure who currently works for 94.1 WIP and Fox 29) appears to be near the top of that pile. Eskin’s latest is an absolutely incredible one from Wednesday, where he referred to Phillies’ outfielder Andrew McCutchen as “Lawrence McCutcheon”:

Coming back from ACL injury last season, #phillies LF Lawrence McCutcheon in the cage working himself back. So far looks fine. ⁦@SportsRadioWIP⁩ pic.twitter.com/wePU5vtCoq

A common mistake I make on Mccutcheon first name. Its Andrew. So go ahead and make this a federal case. The twitter police can be dopes. Bite it https://t.co/m5U3jjWupD

And even the Phillies’ official account made fun of him:

Plenty of people have misspelled McCutchen’s last name over the years, but doing so twice in a short span is remarkable, as is calling him “Lawrence” (there was a Lawrence McCutcheon who played in the NFL in the 1970s, but yeah, that’s not even close). But as Matt Mullin of < PhillyVoice writes, the 70-year-old Eskin has made an astounding array of awful Twitter mistakes over the years. Some highlights, starting with “cluff lee” and “firmer”:

u try to re-do the tweet but u got ketchup on your fingers pic.twitter.com/rKkZjjDcTx

How about tagging the wrong Jessica Mendoza, and then a Jessica Mendiza account that’s never tweeted?

A blessing for baseball fans who watch #ESPN Sunday Night Baseball. @_jessicamendoza has been removed from the Sunday night broadcast. She was brutal. That broadcast was brutal. Now A-Roid needs to go as well. 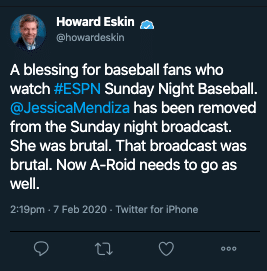 That is very much not ESPN’s Jessica Mendoza he tagged, either time. (Screenshot of the second one via Crossing Broad.)

Astoundingly, “Anzejs Pasecniks” is correct, but #mAgic, “puck,” and “Katvuan” (he meant Latvian) are not. That one got him a Deadspin “Worst Tweet Of The Year” nomination, and while he lost to Darren Rovell, he got mad at Daniel Radcliffe for a video presenting the nominees:

Hey #genius. Not sure how I made this list of worst tweets of 2017, but if you are going to do this at least know how to pronounce all the names. You’re a #nitwit. And BTW was not really a Harry Potter fan. #HappyChristmas @SportsRadioWIP https://t.co/vg2arxRu6q

got bronzer in my eyes but I'm hitting send goddamnit pic.twitter.com/hhbvKlMzVa

But don’t worry, we’re all here to listen to his “oidcastbof”: 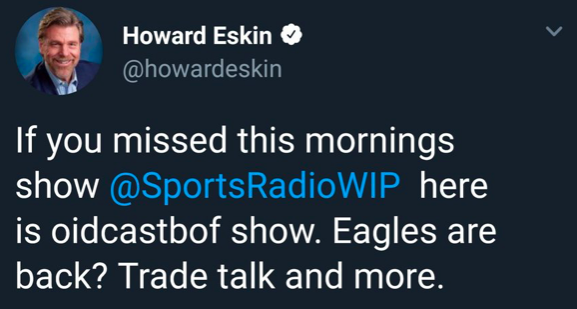 As Maxwell Smart would say: 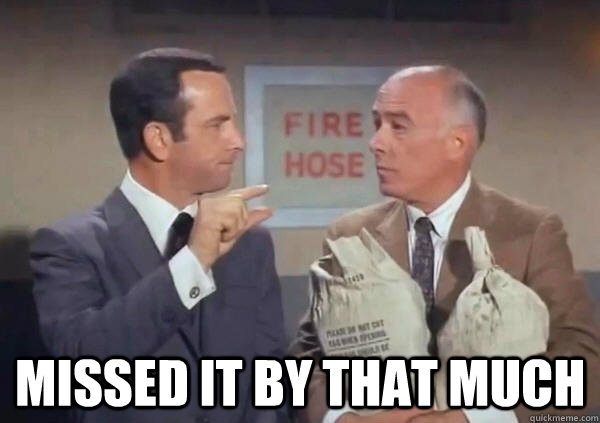 Those are just a few of Eskin’s many, many wild misspellings over the years (and it’s remarkable that he hasn’t deleted most of them). Mullin’s piece includes a lot more, and it’s worth a read. So it’s clear that “an ability to spell players’ names or simple words correctly” is not required to work at WIP. But at least Eskin isn’t actually fighting other radio hosts, so that puts him above some other past and present Philadelphia figures.