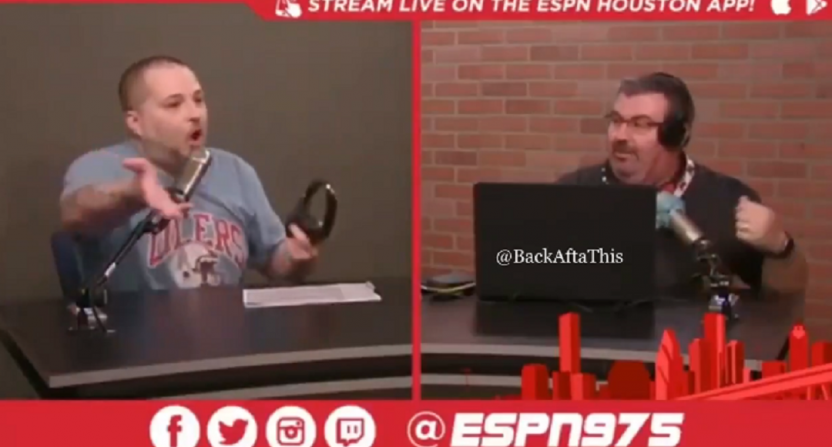 Monday night saw one of the more unusual on-air shouting matches in a while at ESPN 97.5 in Houston, with Jayson Braddock and Patrick Creighton yelling at each other during their “Late Hits” show. That exchange led to a bunch of profanity on both sides, and it also led to Braddock calling Creighton “a bitch” and Creighton calling Braddock “a fucking asshole.” In the end, the producer eventually cut the audio, and Braddock walked out. But as per a piece from Matt Young of The Houston Chronicle Wednesday, the two of them are moving on, and they’re resuming their show Wednesday night:

…“We’ve been doing this for 13 months, and we had one blowup, we’re fine,” Braddock said. “Usually, we’ll go at it and then drop it at the end of the segment, but this time, things got too heated and we got embarrassed by it. We’re like brothers. We’re great friends. The thing I wish I could take back the most is I should have never called this man outside of his name. I would have been even more heated if someone talked to me like that. For me to do it on the ESPN brand in the fourth-largest market in the city, I apologize for that.”

…“The tagline for our show is ‘no-holds barred sports talk,’” Creighton said. “There are a lot of shows that will make up an argument. ‘OK, we both feel the same way about this topic, so you take the other side’ just so they can create an argument. We don’t do that. That’s fake radio. We don’t do fake radio. We say what we think, and sometimes it gets hot. This was just a bad day for both of us and we didn’t move on like we should have. …If being called a bitch was going to make me lose my shit, then I’m in the wrong business. I’ve been called way worse. Brothers fight. We had a fight. We talked about it and now we’re good.”

Braddock and Creighton have been hosting “Late Hits” together for 13 months, with Braddock specifically asking for Creighton to be his co-host. And that pairing seems to work out well a lot of the time. Even a flare-up like this isn’t necessarily terrible for their partnership in the long term, especially with both of them admitting some fault and saying they’re ready to move on. Fights happen, and an authentic fight is better than a contrived one.

There’s still maybe room for both Creighton and Braddock to improve from this, though. While the on-air fight did bring them some attention, that’s not good attention, and it’s not how you usually want to see your show written up. And with a little thought, this could have been a respectful and insightful discussion about the merits (or lack thereof) of Braddock’s take that the Rockets should try to trade the likes of James Harden and Russell Westbrook, rather than a bunch of personal insults (starting with Creighton questioning how much preparation Braddock put into that and Braddock responding with personal criticisms of Creighton). Both have handled this well since then, at least in their comments to Young, but this situation didn’t need to happen. And while addressing it and moving on is a good step, the real growth might be from avoiding this in the future.