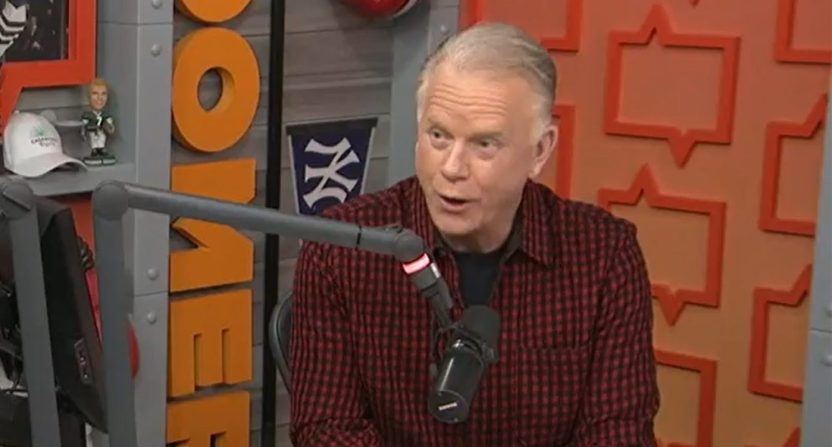 Nearly two years ago, Boomer Esiason annoyed CFL fans with a remark during a NFL broadcast, and apparently, the Ottawa Senators radio announcers did not forget.

Tuesday morning on WFAN, Esiason told co-host Gregg Giannotti that he received a couple of tweets claiming he was mocked by Senators radio announcers Dean Brown and Gord Wilson during their broadcast last night. The tip prompted Boomer and Gio update anchor Jerry Recco to plunk down $8 for access to the full broadcast, and after skimming through the game, he found the moment where Esiason’s name was broached.

Ottawa was playing the New York Islanders, who features Esiason’s son-in-law Matt Martin on their team. That provided Dean and Gord with the opening they needed to mock the former NFL MVP.

“Boomer Esiason looks like Tupperware that’s been used too many times,” Brown said on the broadcast. “You put four or five bowls of spaghetti in the microwave, all of a sudden that Tupperware looks like roadkill.”

Harsh. What could Esiason have said about the Canadian Football League that warranted comparing his physical appearance to roadkill and old Tupperware that housed too much leftover spaghetti? While filling in for Tony Romo alongside Jim Nantz for CBS almost two years ago, Esiason assessed a pick-six from then-Arizona Cardinals quarterback Chris Streveler (now with the New York Jets, where he became a preseason legend this year) by noting he’s not playing in the CFL anymore.

“What a horrific mistake by Reveler [sic],” Esiason said of Streveler, who previously played for the Winnipeg Blue Bombers. “He throws it in between three Ram defenders as he is getting hit in the pocket. You know, this isn’t the Grey Cup, this isn’t the CFL, and you can’t just take chances and throw the ball down the middle of the field and expect somebody not to come down with it. And you can see it right here, there’s no reason to throw the ball there.”

Two years later, Dean Brown and Gord Wilson appeared eager to defend the CFL from Esiason with a prepared and possibly even rehearsed attempt at a comedy bit. Take a shot at the CFL and be ready to have your looks compared to old spaghetti-filled Tupperware. The WFAN morning show reached out to both announcers in an attempt to hash out their beef with Esiason on-air, but didn’t receive an immediate response.