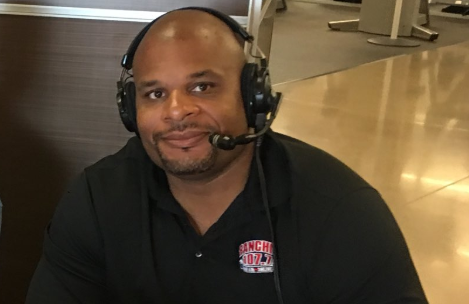 There have been many cases of people losing their jobs after making derogatory remarks about a group or groups, but the case of Oklahoma City radio host Sam Mayes (a former Oklahoma State and NFL player) is an interesting one. Mayes was let go Monday from 107.7 The Franchise (affiliated with the SportsMap Radio Network) in Oklahoma City after publication of 2016 comments between him and Cara Rice, the Tyler Media (station owner) promotions director and morning host on sister station Magic 104.1 (who was also let go Monday over this). Here are those comments, as published Friday on Twitter by Native American attorney Brett Chapman:

Here’s 2 local sports media personalities in Oklahoma City named Sam Mayes (@AllmericanMayes) and Cara Rice being racist to Native Americans by calling us drunks who huff spray paint to get high and that’s why we do nothing. This hate makes me so angry.

A transcription, via Brandon Contes at Mediaite:

During a commercial break, Mayes discussed Native Americans and the push for Washington DC’s NFL franchise to rebrand from their derogatory moniker. The 2016 recording features Mayes and Tyler Media promotions director Cara Rice, who also hosts mornings on a sister station.

“What’s the excuse for the natives that they haven’t been fighting to get this thing changed forever?” Mayes asks in the recording.

They’ve been too drunk to organize,” Rice answered.

Mayes responded with “hashtag Lysol,” to which Rice said “hashtag gold spray paint out of the trash,” as both hosts made references to huffing.

“Hashtag we are all gonna lose our jobs one day,” Mayes continued, prompting Rice to add, “one day one of these microphones will be left on.”

In this case, however, Mayes said in an audio statement posted to Twitter Monday that this wasn’t from a microphone left on, but from a recording of an off-air conversation between him and Rice, which he claims was “obtained illegally.” He also said that he was “uncomfortable” around Rice’s comments, but didn’t feel able to speak up:

“On my day off, I received a call from Tyler Media regarding a recording of a private situation in 2016, that to my understanding was obtained illegally. It was not a hot mic situation. In the recording, I asked a former coworker during a commercial break why the natives were just now attempting to have the name of the Washington Redskins changed. The question was not asked in a derogatory manner. I was just curious what sparked the desire for change. My coworker then responded with distasteful racially-charged comments that I not only did not dispute, but made light of with the response of “Hashtag Lysol.” The remarks that came next from my coworker made me very uncomfortable, and I then ended the conversation by stating ‘That kind of talk would get us fired.'”

“Fortunately, since then, the social climate has changed drastically for the people that were in the position that I was that day. As many of my podcast listeners know, I addressed my unwillingness to speak out against racism in the intro episode of Season Two, titled ‘What do you want to say?’ For years, I worried that speaking out would jeopardize my career due to the color of my skin. I was too often complicit in participating in inappropriate conversations not just to keep from making waves in the workplace, but to fit in. This recording is the perfect example of that all-too-often scenario, that was sent to local media outlets with the intent to destroy my career, and maybe it worked.”

“At the end of the day, that’s up to you, my followers. Tyler Media, however, has let me go. I was heartbroken that before the decision to terminate my eight-year tenure at The Franchise was made, I was not given the opportunity to make amends, explain my position in the conversation, or agree to participate to help facilitate training that would help this type of hostile work environment from continuing on in the future. My heart is broken that years of showing up for my listeners every single day mattered less than one man’s malicious actions against myself and my family.”

“Let’s be honest. I’m not sure any of use would be shocked to hear that I was let go over inappropriate comments. But the fact that it was based on the lie that I’m a racist is a bit too ironic. As a person of color, I know too well how damaging hate speech can be. I also know that once we know better, we can do better. And I’m so grateful that the place is becoming a place that knows better, so that I feel I no longer need to participate in conversations like the one that took place that day. I get to be better.”

There are several layers of complications to this situation. One is that, if Mayes’ comments are correct, this was not something sent out over the airwaves, but rather something recorded off-air inside the station and then released years later. That doesn’t erase or excuse the comments, but it changes the context of them from a broadcast to a workplace conversation.  And that’s an notable difference relative to, say, Twitter comments (whether intended as they come out or not, Twitter is a public forum, and those initial tweets were for public consumption).

There also is a fair point made from Mayes that many people who have made inappropriate remarks have received at least a second chance with a suspension and/or training. It does not seem that kind of opportunity was extended in this case. That doesn’t mean that Mayes should necessarily have gotten a further chance, but it is notable that the instant firing he received has not been the universal response to poor remarks.

However, Mayes’ comments here do come with an awful lot of deflection and retroactive revision. And his statement includes no actual apology for what he said, and it includes at best a very poor explanation of why he started that conversation the way he did, and why he responded to Rice’s remarks with “Hashtag Lysol.” And, absolutely, he undoubtedly experienced plenty of challenges as a minority host at this station, but his statement here is still a lot of blaming the messenger for releasing his remarks and blaming society for putting him in a place to “participat[e] in inappropriate conversations not just to keep from making waves in the workplace, but to fit in” rather than actually addressing his remarks, and why they were wrong, and how he’s learned and grown and changed since then.

In the end, it looks like Mayes won’t be on 107.7 the Franchise any longer. But he tweeted Monday that he’ll still have his podcast, so people can still here him there, and there may be other opportunities ahead for him. In any case, his situation is worth keeping an eye on. It’s at the very least an unusual example of off-air recorded comments coming back to bite someone, and it’s also an interesting case of a radio station just outright firing someone rather than issuing a suspension and a statement of “They’ll go to training.” We’ll see how this ends up for Mayes and for 107.7 The Franchise.